There’s no shortage of breweries with pizza on the BC Ale Trail. In celebration of National Pizza Day (and just because), we visited breweries on mid-Vancouver Island with fantastic pizza pies. But if you’re on the mainland, don’t fret. We’ve got a list of where to find a brewery pizza across the province, too.

Pizza and beer are like chocolate and peanut butter. Sunsets and bonfires. The Mandalorian and Baby Yoda.

They’re both amazing on their own. But together…that’s what dreams are made of.

That’s why I set out to find breweries near me (Campbell River) with great pizza. It wasn’t easy work to build my doughy belly but someone’s gotta make those sacrifices… for you. Yes, you, the reader.

So whether you just finished skiing Mt. Washington, mountain biking in Cumberland, surfing in Tofino, or simply road tripping the Island…chances are you’ll want to quench your thirst and satiate your appetite.

Here are four breweries with delicious pizza on the Vancouver Island Part II Ale Trail (plus a list of pizza-stocked breweries from across the province).

I often find myself daydreaming about the pizza and beer at Devils Bath. I went first while on a work trip in the area and the second time while on my honeymoon through North Island so, needless to say, it holds an extra special place in my heart. It’s built in an old mechanic shop that has been remodelled with a warm wood interior, giving the brewery beautiful atmosphere.

Whether you’re in the area for work, play, or love, you’ll be well fed and well hydrated at Devil’s Bath.

The crust has an excellent chew that’s not too soggy or greasy. With six core pizzas and a rotating feature to choose from, you’ll find one (or two or three) to complement your chosen beers perfectly.

I loved Dracula’s Lament, which was loaded with marinara sauce, chorizo sausage, feta cheese, roasted garlic, caramelized onions, and mozzarella. I paired it with a pint of the Kolsch and was a very happy camper.

And one of the coolest things? They just started offering pizza by the slice! So now, if you don’t quite feel like committing to a whole pie, you can still crush your cravings in the best way possible.

They even have a kid’s menu with cheese and pepperoni pizza to keep the little devils happy while the ‘rents enjoy a pint.

No Vancouver Island pizza-beer blog would be complete without the story of Cumberland Brewing and Rider’s pizza.

Co-owner Michael Tymchuk got his start in the kitchen and beer world while working at Spinnakers in Victoria over 30 years ago. Eventually, he went on to teach brewers and assemble brewing systems all over the world.

In 2011, Michael and his wife, Caroline, first opened Rider’s Pizza, which soon grew into an icon for Cumberland. In 2013, Darren Adam and Michelle Forslund came to the pizzeria and  ended up chatting with the Tymchuks. When Darren heard of Michaels experience, he hatched a plan to convince his new friends to partner in a brewery for Cumberland.

The two joined forces and opened Cumberland Brewing within Rider’s Pizza. But soon, the pizza shop grew too fast for the space they were in so they moved across the street to a new location.

I recently visited both spots for take-out while helping some friends move into their new place in Cumberland. We got half BBQ Chicken and half What’s the Yams, both of which had creative toppings atop crisp, light, chewy crust.

There’s a wide variety of interesting flavours and, since you can order two flavours in one pie, they’re extra great for sharing. They also have gluten free and dairy free options so all your buds can join.

And the best part? If there’s a wait at the pizzeria, you can pop over to the brewery to wait for a bevvy (or vice versa), or snag some beer to go after picking up your takeout. It’s the perfect fuel-up stop after a long day of biking or hiking in the area.

I have heard whisperings about Twin City’s pizza for years, so I was dying to give it a try. I’ve frequented the area a few times for forestry work but, for one reason or another, I kept missing my chance to visit for a pie.

Finally, my wife Natalie and I put it in our calendar and made the drive from Campbell River to Alberni for a feast.

The brewery itself lives up to the town’s forestry roots. A couple (off duty) loggers enjoyed a pint in their high-vis and faller pants. An old Bloedel Lumber sign adorned the wall, alongside the brewery’s logo which features two axes.

I felt right at home.

But the pizza and beer will please you no matter your profession.

Lucky for Nat and I, they also offer two flavours in one pie (choosing one is never easy).  We went for Honey Dust and Prost Apocalyptic, which contrasted super nicely.

The Honey Dust was a feature pie with some spice. It had a nice little kick of heat that married well with a sweet drizzle, reminiscent of southern barbeque chicken. We loved pairing it with Power Struggle, a s’mores golden stout that contrasted nicely against the heat while simultaneously complementing the sweetness.

Tucked away in an industrial area of Parksville is Mt. Arrowsmith brewery. It’s become a staple for the community, which we could tell by the bustling crowd inside the brewery and out in the dog-friendly picnic area.

We grabbed a flight to enjoy at a picnic table while we waited for a spot inside. Then we made our plan of attack on the pizza menu.

Having just demolished a pizza at Twin City (yes, we tackled two in one day), we thought we’d keep it a little “lighter.” We went for the Herbal, which had roasted red peppers, zucchini, mushrooms, onions, pineapple, and mozzarella cheese.

What was great about having Mount Arrowsmith’s pizza after Twin City’s pizza is they’re kind of different styles. Arrowsmith is more New York-esque style, perhaps? Not that I’ve been to New York. But it’s loaded with cheese in the best way, while still allowing the fresh toppings to shine through.

The crust was nice and chewy on the inside and crispy on the outside. It kind of reminded me of a better version of Panago’s crust (which is a compliment from me because I’m a Panago stan, come at me Domino’s fans).

We grabbed a flight to go with the pizza which included the Blonde, Salish Pale Ale, Winter Ale, and their guest tap, the Moon Under Water Shaft.

Needless to say, we were a couple of full, happy people.

Other craft breweries with pizza offerings

There’s loads of great craft beer and pizza on Mid-North Vancouver Island alone, but that’s just scraping the surface! Here are some other craft breweries from across BC that also offer fantastic pizza alongside their beverages: 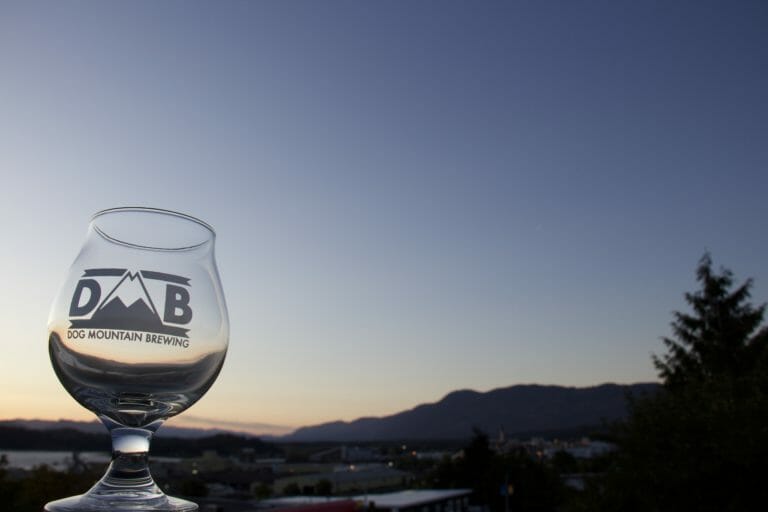 We’ve got a hand for you the next time you want to head out for a stellar night in Port Alberni. The hand – a khamsa in Moroccan – will chase away evil and negative energy, which your hosts Dan and Buchara Savard, owners of the Swept Away Inn, would rather you leave behind when … Continued 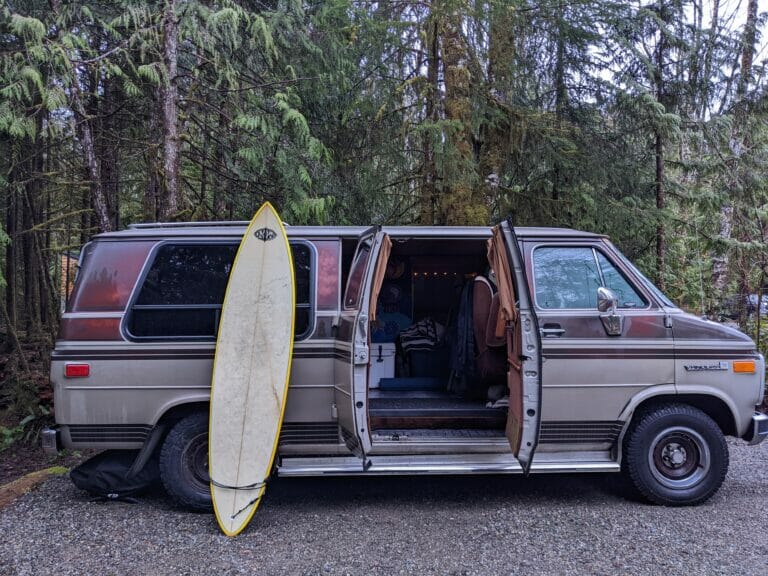 Is there anything more iconic than van-dwelling, craft beer-sipping, and surfing in Tofino?  BC’s surf capital isn’t exactly a secret. But, no matter how many times you explore the area in and around Tofino, there’s a chance to discover something new. Whether it’s an undiscovered-by-you view spot or a friendly face you meet along the … Continued 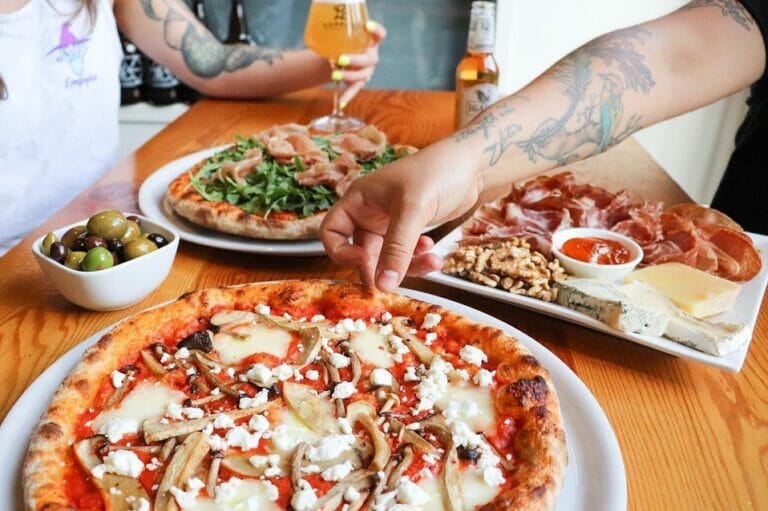