Is there anything more iconic than van-dwelling, craft beer-sipping, and surfing in Tofino?

BC’s surf capital isn’t exactly a secret. But, no matter how many times you explore the area in and around Tofino, there’s a chance to discover something new. Whether it’s an undiscovered-by-you view spot or a friendly face you meet along the way, there are always new experiences brewing nearby. Rain or shine.

It’s been a record-breaking cool and wet spring. But my friends and I didn’t want to let that affect our plans to enjoy some much-needed R&R in Tofino before the busy season kicked in.

So, we decided to embrace the rain. We packed up our van and headed southwest from Campbell River for some old fashion Island fun—which means plenty of craft beer along the way.

Fuelling up in Port Alberni

No craft beer-focussed trip to Tofino is complete without a stop in Port Alberni. This little town packs a big punch in the brewery department.

Hit up Twin City Brewing for stellar pizza and award-winning, inventive beers. It’s clear to see why they were awarded the BC Ale Trail’s Best Brewery Experience award in 2020.

Visit Dog Mountain Brewing for beers with awesome names like Stouty McStoutface and Entering Tsunami Hazard Zone. They also have a tasting room kitchen and a rooftop patio where you can catch sunset views of the Alberni Valley and Alberni Inlet if you happen to visit on a less rainy day!

Finally, be sure to also stop by Alberni Brewing Co. which features spacious seating, a fireplace, an outdoor patio, and a full kitchen serving a wide range of delicious dishes alongside tasty beers. Clearly, you’ll be well-fed after your fuel-up in Port.

If you’re looking for non-culinary adventures to do while you’re in the area, you’re in luck. Try chasing waterfalls, exploring McLean Mill National Historic Site and Park, or visiting Cathedral Grove in MacMillan Provincial Park for some big tree therapy.

Once we arrived in Tofino, we made ourselves at home at Surfgrove Campground. It was dark and pouring rain at that point but, hey, that just makes the van feel extra cosy. It was perfect for curling up with a rich, dark beer like Twin City’s Porter Alberni.

I wish I could tell you we had some killer dinner out on the town, but we kept it simple: Canned soup and snacks in bed, while sipping craft beers we grabbed along the way.

And that was A-okay with us.

Respect the Camper’s Code and be Adventure Smart

Speaking of setting up camp, no matter where you decide to park your van or pitch your tent, make sure you always follow the Camper’s Code.

Whether you’re hitting rugged backcountry, van camping, or glamping, you’ll want to pack gear that keeps you comfortable and safe. Check out Adventure Smart for resources on equipment, keeping an eye on weather conditions, navigation, and more.

We reconsidered surfing the first morning after looking at the surf forecast (the currents were a little too wild for our newbie skills). So we decided to head above the ocean instead.

We strolled Cox Bay and headed towards the Cox Bay lookout. Somehow, none of us had climbed it before!

The drizzle of rain made us feel extra hardcore as we scaled roots and mud puddles. Once we reached the top, we soaked up the view in all its glory: smooth sand bordered by lush forest and crashing waves speckled with a few (braver, more skilled) souls.

Once we got back down, soaked silly, we decided to treat ourselves. Because, when in Tofino, right? We hit up The Pointe Restaurant for a cosy lunch watching the waves roll in. Not a hidden secret by any means, but, again, none of us had eaten there before so…it was new to us!

I had a brunch special featuring a potato rosti that was perfectly crisp on the outside and tender on the inside. It was topped with smoked salmon, dill, poached eggs, and the most delicious burrata cheese. Food like that just tastes better when you’re muddy and rain-soaked.

Soon enough, it was beer o’clock. But before heading to Ukie, we wanted to grab dessert. We went to Bravocados, a vegan place that was also “new to us.” My friend who can’t eat gluten or dairy was very happy to find a fantastic chocolate cake she could eat. Dietary restrictions or not, it was killer.

A taste of history and community at Ucluelet Brewing

To wrap up our evening, we headed down to Ucluelet. I had never been to Ucluelet Brewing before so it was exciting to finally pay it a visit.

The tasting room is built in the former St. Aiden’s church, which overlooks the harbour. High ceilings and salvaged wood compliment west coast art, creating a warm space I just wanted to spend hours in.

We sat down with owner Dennis Morgan to taste a flight, hear the story behind the brewery, and get a peek at the brewing equipment.

Turns out, the Church was likely built with volunteer labour in the early ’60s. Many of Ucluelet’s Brewing’s local patrons have “stories from the church, including marriages, Sunday school in the basement, and even the thrift store that was there for years,” as their website says.

Morgan said he wanted to create a space that would continue acting as a hub for the community. He wanted it to be a space for locals to gather regularly just as much as visitors, and it’s become exactly that. While we chatted, Morgan seemed to know every second person who came in to grab a table.

As for the beers themselves, I fell in love with each one I tasted. They were all classic styles done with the same attention to detail as the space we enjoyed them in. I especially loved the King Tide Pilsner, a flavourful beer that’s lagered for 8 weeks, and the St. Aiden’s Porter, a smooth, roasty beer that’s “strong and sturdy like the building [they] brew in.”

Eventually, warmed up (physically and metaphorically), we had to head back to the campsite. It was time to rest up for surfing!

If you have a bit more time than we did, you’ll want to pencil in a stop at Tofino Brewing, a west coast icon that opened in 2011.

Tofino Brewing was actually the very first craft brewery I ever visited (after Howe Sound Brewing, which I frequented while growing up in Squamish). So it holds a special space in my heart.

I remember rolling up back in 2017 on a winter weekend away while in university and being smitten by the tasting room, the growlers, and the dogs that hung out with everyone. Turns out they still love dogs and have two dog-friendly patios. So bring your pups!

As a bonus, they’ve recently gotten local government approval to increase their tasting room capacity which is great for shortening lines. Needless to say, this spot is still a quintessential part of visiting Tofino.

The next morning, we made it out on the water. And surprise, surprise! The sun made its glorious appearance. Take THAT, Juneuary.

As I gradually got into the rhythm, I couldn’t help but stop and pause to look along the coastline.

One of my favourite things about surfing, especially since I don’t do it that often, is the vantage point you get. You see the beach, water, the trees from a whole new angle, whether you’re standing up catching a wave or simply drifting on your board. Everything just looks and feels a little different. Whether the skies are clear or it’s raining sideways, I can’t help but pause to take it in.

Of course, we had to get back to reality eventually. So after cleaning up, we toasted the end of the weekend with one last can from Ucluelet Brewing. Wet hair, happy taste buds, and full hearts.

Explore More Camping Spots in BC

You’re bound to find something that fits your craft beer adventure like a glove.

Go Camping BC: Your resource for all BC parks and camping sites. 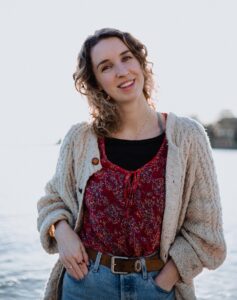 Natalie Gates is the Newsletter and Blog Editor for the BC Ale Trail. Based in Campbell River, BC, she’s also a freelance copywriter for small businesses. When she’s not writing up a storm, she’s probably plotting her next meal or enjoying a crisp craft lager at one of her favourite breweries. You can connect with her on Instagram, LinkedIn, or at her website nataliegates.ca. 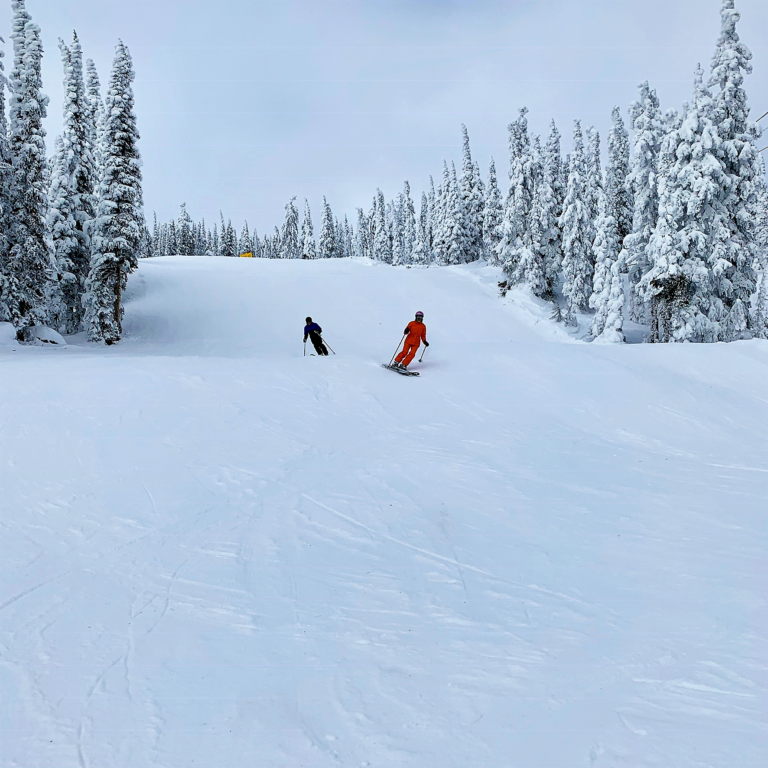 The promise of a winter wonderland paired with a host of après ski delights had our crew excited to get to our destination, Big White Ski Resort, just a short drive from the Kelowna Ale Trail. With hardly any snow in the valley, this season heading up to Big White Ski Resort from Kelowna for … Continued 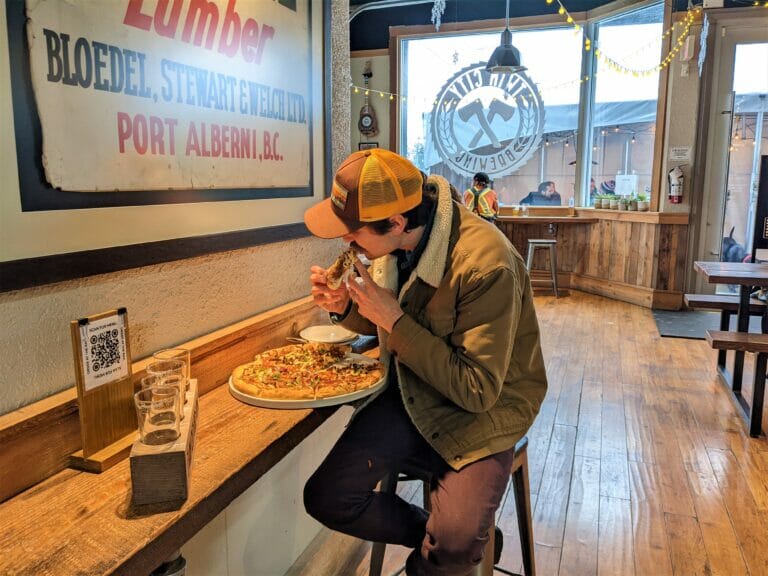