Combining a skiing adventure while exploring the Kootenay Rockies West Ale Trail from Penticton, we visited the Trail Beer Refinery along with a few other breweries nearby as we meandered to RED Mountain Resort. 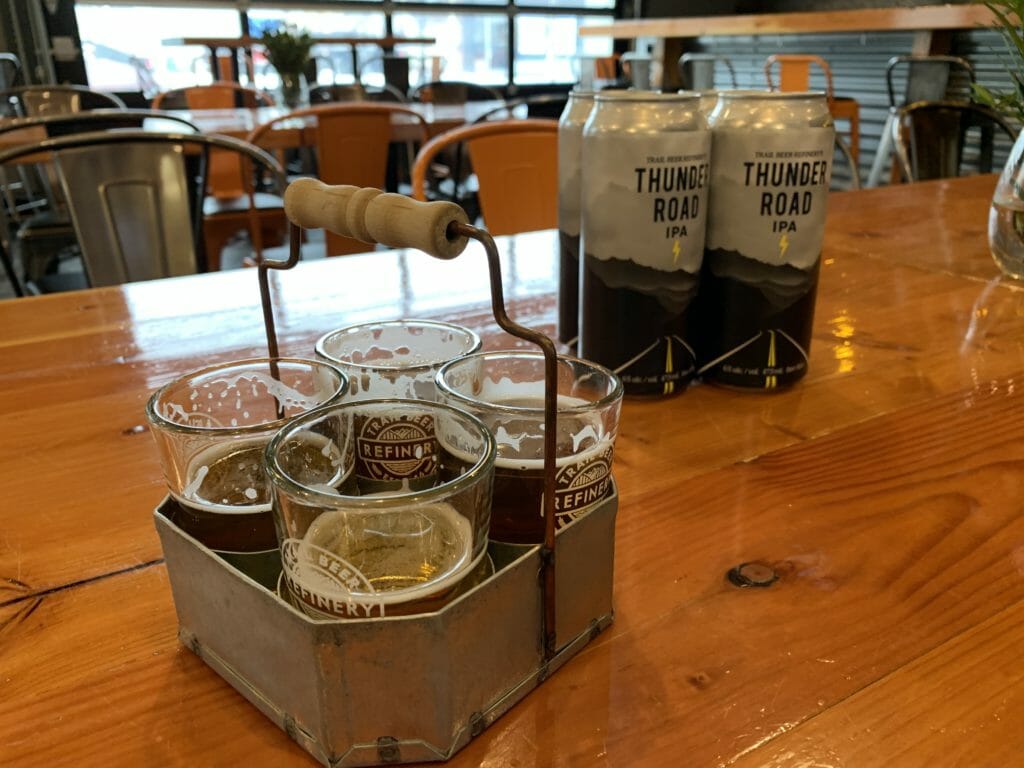 The oldest of these craft breweries, Rossland Beer Company was established in 2012 by Owners/Operators Petri Raito and Ryan Arnaud, brewmaster. It crams a lot of community love into a small space. Evident by a 15 to 20 per cent sales growth annually, Rossland Beer lives up to its slogan “Small in size but big in flavour” despite limited space. 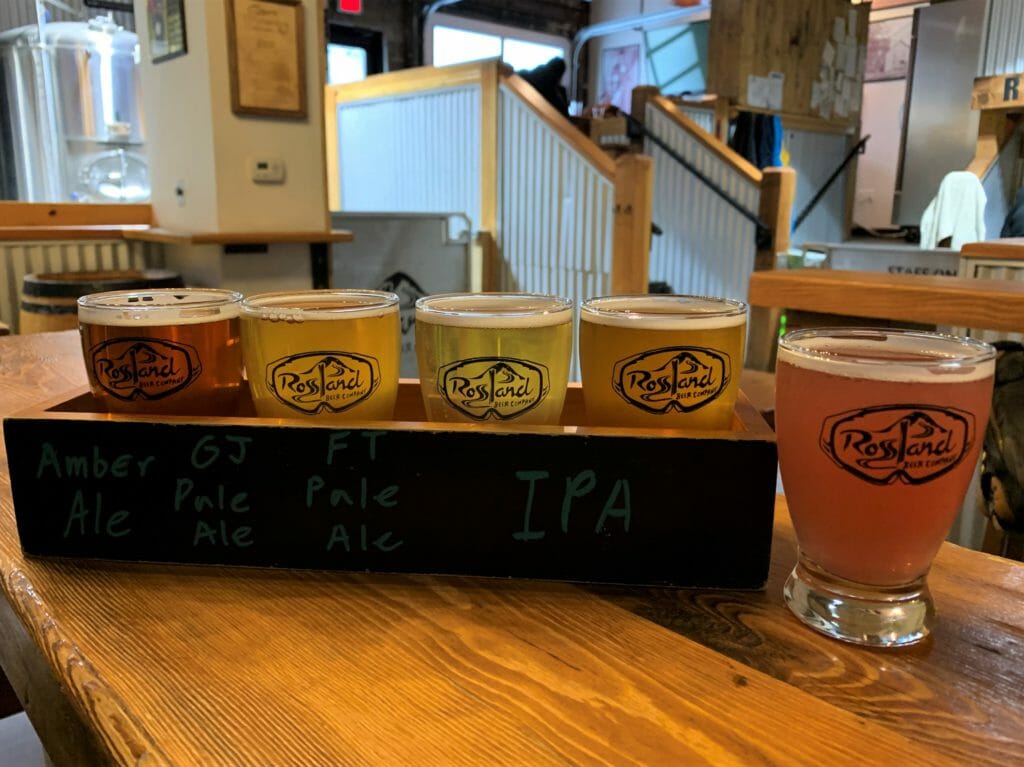 With Petri we tasted Red Zeppelin Raspberry Wheat Ale (seasonal), Helter Smelter Amber Ale, Green Jacket Pale Ale, 4 on The Floor IPA, and the new Faulty Towers Pale Ale featuring New Zealand’s Nelson Sauvin Hops. Many brews are one offs and may not reappear. In the taproom, the gold medal Seven Summits Milk Stout was out-of-stock.
Rossland Beer sticks to its beer focus and offers light snacks only. Occasionally a food truck is onsite and a local bakery sometimes offers sandwiches. People are encouraged to bring in their food to pair with the beer. 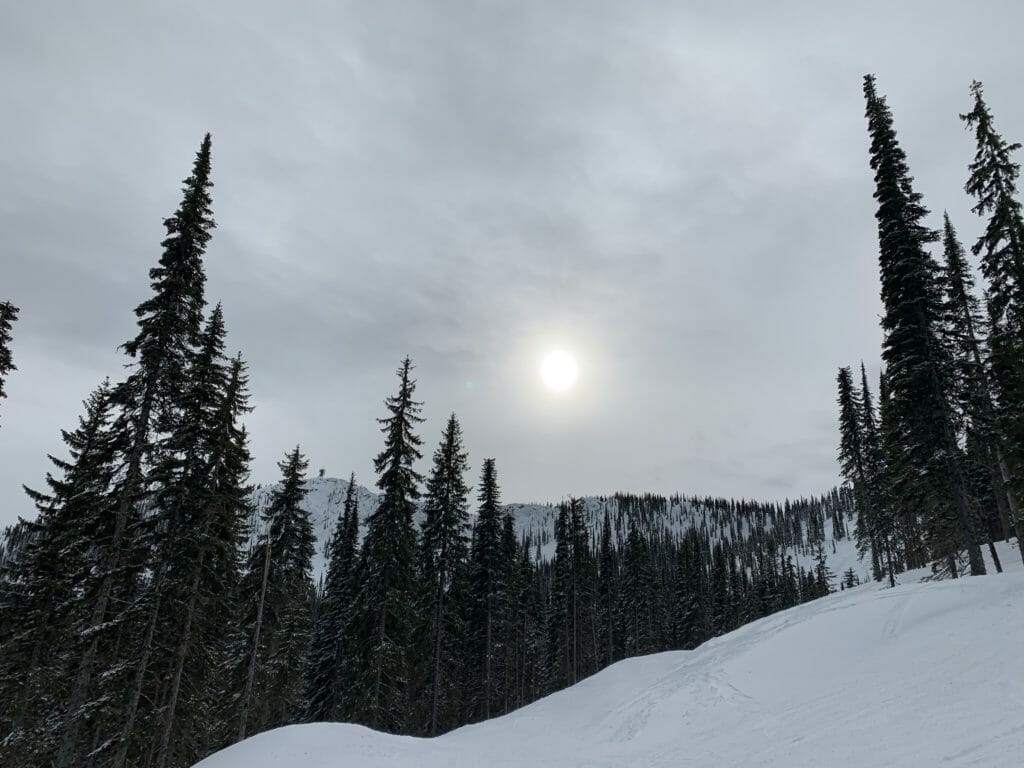 Snow gods blessed RED with the most January snow days in over 15 years, making our drive more challenging. An hour added by wintry roads, we arrived at Tailout Brewing’s noon opening.

Beer tastes best in the summer – especially after scuba diving. Yet, the flight of finely made craft brews revived us completely. Open three months, Tailout Brewing is already a focal point. Without its own restaurant, it collaborates with local favourite The Grand Buddha Bistro conveniently located upstairs. Tailout specials include four items. Order take out to access the whole menu and bring it downstairs to eat with a beer. Thai food not your thing? Bring in other food.

Tailout’s owners are fishing enthusiasts. “Tailout” refers to that special shallow of water before it spills over into another riffle. Once monthly, the “Pint of Knowledge” evening includes topics like Alpine trout and Spey fishing in the Columbia. There are fly-tying nights, bingo, crib tournaments and concerts. When spring sweeps into the valley, Tailout will fling its garage door open and hopes to add a patio. “Another DIY project like inside,” noted Hedin Nelson-Chorney, owner/general manager, leading us through our flight of well-crafted Twin River Red; Bomb Blonde; Coffee Blonde (a limited-edition cold brew on nitro sourced from Seven Summits Coffee Company, Rossland); and Alpine Start Mocha Stout. We also tasted the flagship Single Spey IPA. Starting small, if pushed 10 brews could be produced monthly. Hedin added, “We all have an affinity for outdoor lifestyle including fishing. That’s why Castlegar is perfect. You can ski, bike or hike in the morning and fish in the afternoon. Who doesn’t need a beer to accompany that?”

Each brewery has distinct style yet shares craft beer passion and connection to the communities that drive their success. The beer names are creatively intentional whether on theme with fishing, history or lifestyle: Pull up a chair to hear the stories. Each brewery has a tap on rotation showcasing other breweries and other drinks such as sodas, local wine and cider. The cooperative spirit extends to Angry Hen Brewing (Kaslo), and Backroads Brewing Company, Nelson Brewing Company, Torchlight Brewing Co. (Nelson) and beyond.

An historic Inn and saloon in Rossland, The Flying Steamshovel is named from lore about a contraption built by Lou Gagnon to ferry gold ore off Red Mountain’s steep slopes, as told on the website’s ‘History’ tab. The gastropub with upstairs boutique rooms features an award-winning menu, 14 craft beer taps, BC-focused wines and handcrafted cocktails.

On stage every week in the neighbourhood pub venue are Canadian and International music artists. General Manager Dan D’Amour noted guest rooms are being renovated with plans underway for a basement expansion and the addition of six taps.

As part of Rossland’s upcoming Beer Goggles Craft Beer Festival, the Flying Steamshovel will host a tap takeover by Penticton’s Highway 97, Neighbourhood Brewing and Bad Tattoo Brewing. A special menu will utilize one beer from each of the breweries.

On best lists by The New York Times, Powder and Skiing magazines, aside from the superb skiing and snowboarding, “RED boasts world-class cross-country skiing, snowshoeing, fat-biking and other activities all easily accessible” through the Get Lost Adventure Centre. For craft beer and other après action, Powder named Rafters Lounge “North America’s Best Ski Area Bar.” At Rafters for lunch we discovered Borscht with Sourdough and craft beer.

“Experience the true soul exhilaration of living for today,” invites The Josie Hotel, named by World Ski Awards as Canada’s Best Ski Boutique Hotel 2019. We were hosted at this genuine ski-in/ski-out property, steps from RED Mountain chairlifts. Fortified by The Velvet’s elevated breakfast, we were stoked to hit the slopes. The Josie’s Ski Concierge mountainside spoiled us with the extravagance of slipping into warm ski boots before strapping on gear and sliding easily over to the lift.

While our ski timing missed the best of powder, RED’s many lifts, varied terrain and vistas made for a memorable experience. Having skied RED last in the early seventies, the expansion blew me away!

Modern chic design yet cozy, The Josie is welcoming. We loved the repurposed chairlift seats in the front lobby! Guests have access to a premier fitness facility, spa and crackling fire pits. Fair warning: Cloud-like beds in beautiful rooms could seduce you into spending your après ski time tucked away.

In its 7th year, the annual Beer Goggles Craft Beer Festival returns to RED, March 27 and 28, 2020. The “finest craft breweries, thirstiest beer enthusiasts and hungriest powder fans” gather for a weekend of “fun and foam”. Open to ages 19+ with proper identification, buy tickets online or at RED guest services

“Beer Goggles is not simply a beer festival, but a celebration of the craft beer industry,” says Don Thompson, GM of RED Mountain Resort. “And RED is kind of the ‘craft beer’ of ski resorts: better taste, less filler! We really feel a common bond with many of these breweries and respect their daring independence and devotion to making people happy.”

Embrace the outdoor lifestyle of Kootenay Rockies and track the locals to the best local après ales. 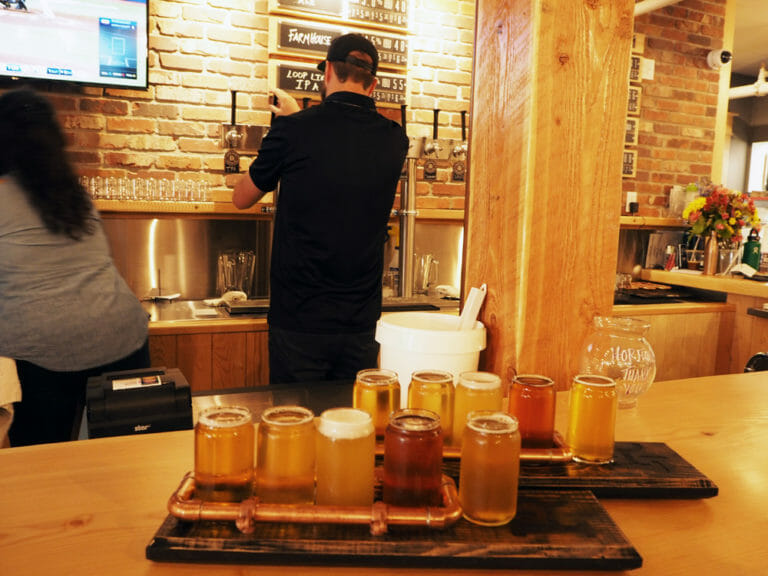 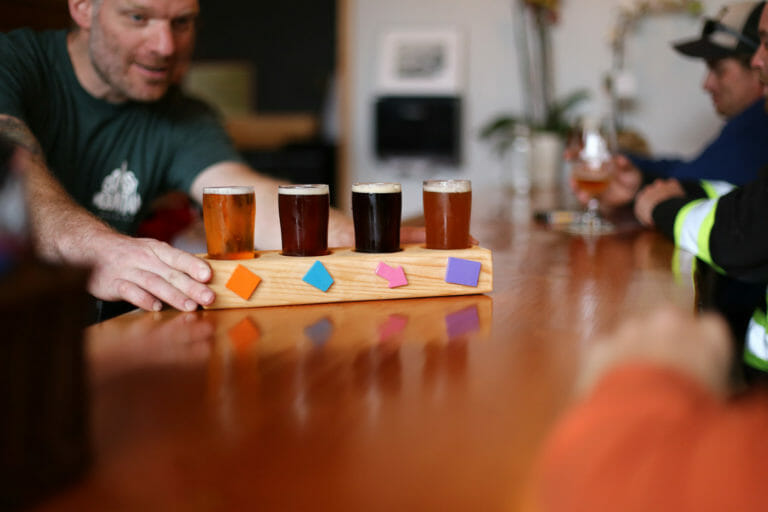 The History of BC Craft Beer — Part 3

This blog post picks up where we left off in “The History of BC Craft Beer — Part 2.” Following its humble beginning at the Horseshoe Bay Brewery in 1982, the craft beer industry in British Columbia grew slowly and steadily over the next three decades. It enjoyed a mini-boom in the 1990s, and then … Continued

Happy hour along the BC Ale Trail is an even more sacred time after an awesome day of outdoor adventures. Make your way to the marine outpost of Bamfield on the west coast of Vancouver Island and amplify your cheers factor tenfold. Here’s how to do it. A hiking mecca, Bamfield has been known for … Continued