Whistler might be best known as a premier mountain destination and the host resort of the 2010 Winter Olympic and Paralympic Games, but its world-class restaurants, hiking/biking trails and numerous events and festivals make it worthy of attention year-round. A big part of the appeal is its craft beer experience, anchored by the BrewHouse in Whistler Village, along with two breweries in the funky and fun Function Junction neighbourhood.

Sure, what gets you to Whistler in the first place is likely the snow-clad mountains, or perhaps the Top of the Mountain bike trail that descends 5,000 feet from the top of Whistler Mountain, but once you’ve finished your day on the slopes, it’s time for a beer, right? No worries, bro, the BC Ale Trail has you covered.

Start in the Village at the BrewHouse, located right beside the Olympic Plaza. It’s a big, welcoming brewpub with a great kitchen and a solid beer list, including the award-winning 5 Rings IPA, which was named BC’s Beer of the Year in 2012. If hops aren’t your style, the rest of the beer list is top-notch.

Next, pop over to Function Junction, Whistler’s “industrial zone” 10 minutes south of the Village, which is home to two breweries—one old and one new. Whistler Brewing Company, founded in 1989 (though not in this location) has a strong, stable presence in the community and throughout BC. The brewery has a tasting room and offers tours. Nearby is Coast Mountain Brewing, which offers its own unique range of beers in its tasting room. In addition, they have a love for sour ales and have a modest oak barrel program with special releases throughout the year.

Along with delicious beer and amazing food, there are lots of other fun activities to enjoy in Whistler. Take a sauna followed by an icy plunge at Spa Scandinave. Or learn how to throw axes like a proper lumberjack.

If you’ve timed your visit well, you can also experience the Whistler Village Beer Festival, which takes over Whistler Olympic Plaza and other venues in the Village in mid-September each year. 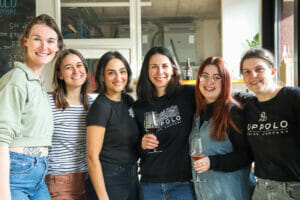 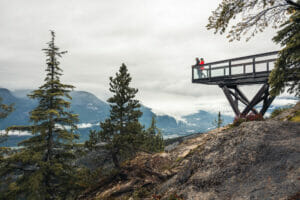 Explore BC's epic Sea to Sky with Fuel for the Sole 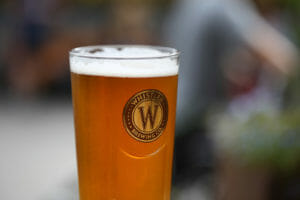 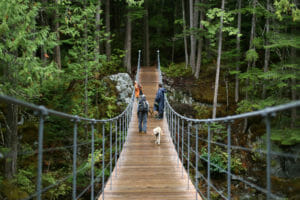 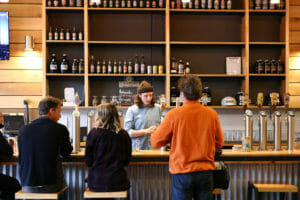 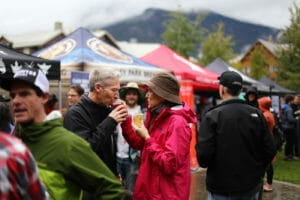 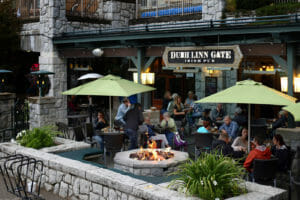 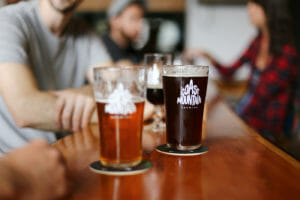 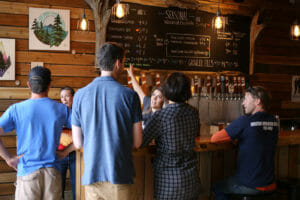 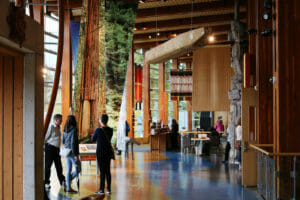 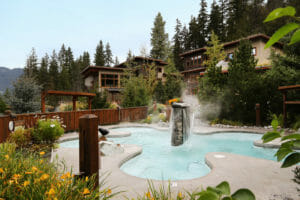 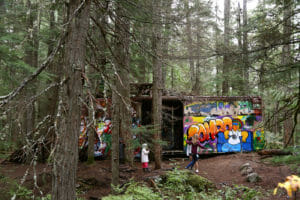 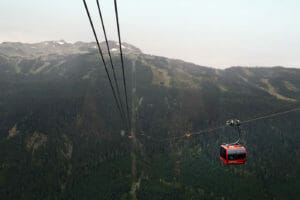 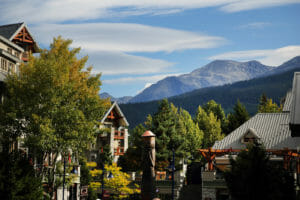 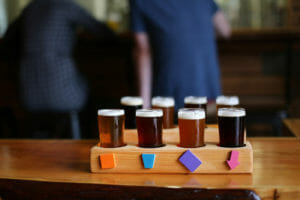 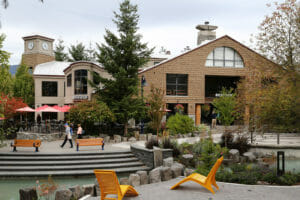 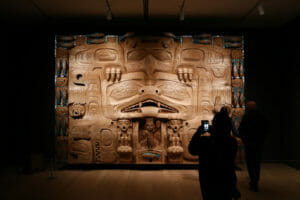 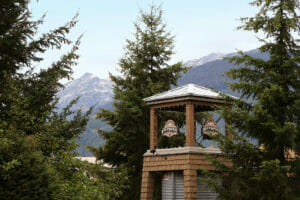 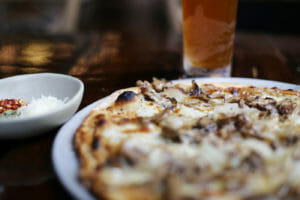 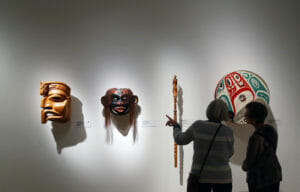 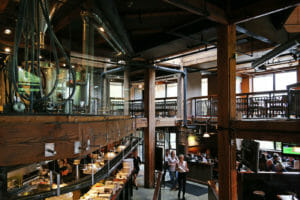 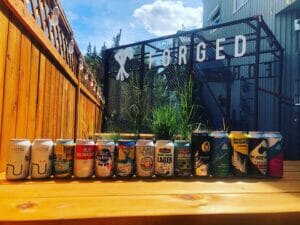 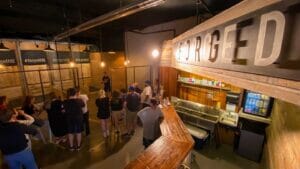 Learn to throw axes like a Canadian lumberjack with Forged. No experience necessary, come throw today!

Coast Mountain embraces community, the landscape and wildlife of the Sea-to-Sky region.

Located in the heart of the village and home to Whistler's authentic wood fire baked pizza.

Find a place to stay!
whistler.com

Find a wide range of accommodation options in Whistler Village, from backpacker inns to high-end resorts. Visit the link above for Moderate Rooms starting at $99.00 per night.

Around Whistler no matter which direction you take you’ll quickly find yourself in the forest, or by a lake – even if you only have an afternoon to spend. From Cheakamus Crossing you’ll find awesome hikes to both the Train Wreck – a set of abandoned rail cars turned art installation – and the beautiful Cheakamus Lake. When you finish you’re right across from Function Junction where you’ll find both of Whistler’s popular breweries.

A family bakery with one simple mission: to bake delicious treats that bring a smile to people’s faces. Delicious coffee too!

Locally owned gastro pub, serving delicious food and locally sourced craft beer. Be sure to check out their live music and summer patio.

The Brewhouse is located right next to Whistler Olympic Plaza in the heart of Whistler Village. Bonus, they brew their own craft beer.

The best patio in Whistler on the Village Stroll. Gastro-pub menu with craft beers on tap.

Whistler is the perfect place to discover the joys of biking thanks to the Valley Trail. It’s a car-free, multi-use network of over 40 km of paved trail that means you don’t have to pedal on the road to get from lake to lunch spot. In the summer months, be sure to check out Whistler’s outdoor concert series for some free entertainment.

Learn about the art, history and culture of the Squamish and Lil’wat Nations. Hourly guided tours, interactive exhibits and gift shop.

Experience the art of British Columbia, from the traditional works of the province’s First Peoples through to its contemporary masters.

Quench your thirst and delight your palate at Whistler’s original craft beer bar.

A place to gather with friends, eat locally made foods, and drink awesome craft beer.

The Scandinave Spa is a Nordic-inspired oasis on the edge of Lost Lake Park featuring hot and cold plunge pools, a wood-burning Finnish sauna, eucalyptus steam room and massage facilities.  Take a walk or snowshoe in the forest and then rejuvenate in Whistler’s most unique health and wellness spa.

Only 30 minutes outside of Metro Vancouver begins the epic Sea to Sky country. Beginning in Horseshoe Bay and up through Squamish and Whistler to Pemberton, the Sea to Sky Highway (Highway 99) takes you on a journey of spectacular sights, incredible adventure and welcoming communities. We’re Meagan and Andy of Fuel for the Sole — join us on an ale-venture!

Located in the rugged Coast Mountains just two hours north of Vancouver, Whistler is Canada’s favourite year-round destination. Surrounded by mountains, lakes and rainforest, the resort offers epic skiing and snowboarding, four championship golf courses, exceptional mountain biking and hiking plus a vibrant base village with shopping, dining and a rich arts and culture scene. Three breweries call Whistler home, offering beers to quench thirst arising from adventures of all sizes. With pubs where craft beer flows freely and a host of events celebrating food and drink, Whistler is a place where life is lived to the fullest and you don’t just après-ski – you après-everything. 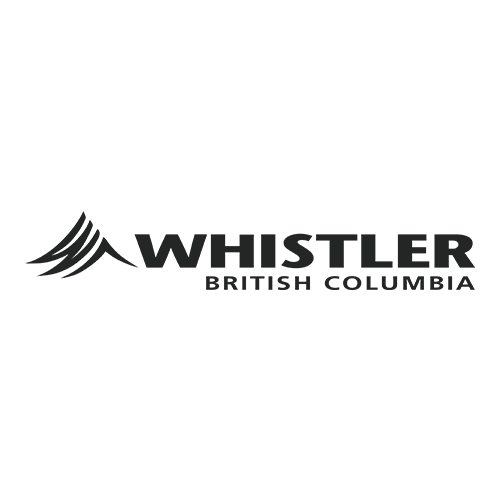