When talking bikes and beer, does anywhere in particular come to mind? Worldwide, there are few places that fit the description like the region around Nelson, in the West Kootenay area of British Columbia.

If true downhill biking and local craft beer are the combo you’re looking for (along with some more recent flowy trails to cruise on), welcome to the West Kootenay area. Here, locals talk about trails and technical features like others talk about the intricacies of business — it’s a serious part of the lifestyle. And when you “work” this hard, you need a good watering hole to wind down in, too.

Nelson has garnered lots of love from mountain bikers in-the-know, with a craft brewing scene that’s been revving up for a few years. So instead, here’s a little local love for the West Kootenay bikes and beer stashes just outside this hot spot.

Castlegar Bikes & Beer: The best of both worlds

My boyfriend, Brent, and a crew of riding friends loaded bikes in the back of the truck. It was a late start to the evening as we headed from Nelson to Castlegar, with a debate en route as to where our destination should actually be. Would we hit up Castlegar’s Merry Creek to check out the new trails and features, or head to Rialto, the go-to for the group on most days?

As we neared the exit and Castlegar’s Columbia River came into view, a decision needed to be made. New trails and features won.

Merry Creek, one of the main mountain bike areas in Castlegar along with Rialto, is known for being the cruisier of two — but that’s not saying much when you’re in the Kootenays. Serious steeps is almost always in the cards. Add in many mandatory natural and built features and you’ll find challenges on a majority of our trails.

But compared to Rialto’s classic downhill-style of mountain biking, Merry Creek offers flow and quick rips for a wider range of skills.

We arrived at the trailhead for the new “Wings of Merry” ride. While Brent unloaded the bikes from the truck and the others geared up, I ran down the trail to be in place for photos. Once the group passed by, I hustled back so I could fulfill my role as shuttle bunny and grab everyone for a ride back up.

I was excited to see the facial expressions as each rider came off the new trail. But as I drove down, a sweeping overlook of Castlegar stopped my tracks. I stepped out to grab a shot and thought about how distracted I’d be by that view if I were in the saddle at that moment.

Due to my pit stop, everyone was already waiting for me at the bottom of the trail, but Lo, one of our crew, was still sporting a grin.

“So fun,” she said, loading up for another go-around. “Steep, rock slab, a bit old school. And it was loamy.”

With two of the four rides that evening claimed by this newcomer, Wings of Merry was the clear favourite. And after wrapping up the biking, we discovered a bonus of Merry Creek: it’s an easy ride to the beer.

The beer at Tailout Brewing

From Merry Creek parking lot to craft beer parking lot, the ride is all downhill.

Most of the crew decided to ditch the truck for a breezy coast to one of West Kootenay’s newest craft breweries, Tailout Brewing. And once again, the bikers were faster than the truck. I pulled into the parking lot of Tailout to find everyone either lined up for their order or already seated at a long, live-edge wood slab table. The doors to the brewery were thrown open, letting lots of fresh air into the open space which was decorated with custom art paying tribute to the Tailout team’s love of fishing — very appropriate for a town lined up on the banks of the Columbia River.

Flights and pints were ordered, friends swapped bike stories, and second rounds were ordered. But unlike a clear winner at Merry Creek, the vote for winning beer on tap was split: SMaFF! (SMaSH-style) and the SMOMA-CH (cherry sour).

Looking for more of that classic Kootenay style? In Castlegar, there’s no better bikes and beers combo than the perfectly paired offerings of Rialto riding and the Lion’s Head Pub.

Though the trail selection may be limited, what Rialto lacks in options it makes up for in length and Type II fun. Check out “The Awakener,” the double-black favourite of Brent who describes it as “Black. Steep. Fun features, kinda old-school.”

He’s a man of many words.

Also keeping it simple is the classic pub, Lion’s Head, an eight-minute straight shot drive from Rialto. Head here to cool off with a few of the many Kootenay breweries featured on tap (last I was in, eight of the twelve taps featured Kootenay beers) and fill up on the comfort food. My pick: The chicken fingers — can’t go wrong with the special breading Lion’s Head created.

Both Salmo and Nelson can claim Whitewater Ski Resort, located between the two towns. However, only Salmo can claim its very own ski hill, which in summer turns into its very own bike hill. And this Salmo ski hill-turned-bike hill also claims a taste of solid Kootenay riding.

Looking at a map, the bike terrain at Salmo Ski Hill seems to cover an area as large as the village itself. And it’s growing. The mix of hand- and machine-built trails rep, respectively, both the styles of old-school downhill and new-school flow found in mountain biking. There’s a mix of difficulties, too. While you’re crushing blacks, your kids can cruise green (or vice versa, as is often the case).

A fave trail here is the hand-built “Inducer” which can be ridden in three sections — the top and mid run blue, while the bottom’s tight, steep turns help it hit black by “official” standards (though the trail crew call it an overall intermediate ride).

A full black choice is “Drifter” — the first trail to get sanctioned at Salmo Ski Hill. Its turns navigate tight trees, built features, and steep, loamy forest. This is a don’t-ride-when-wet kind of classic Kootenay trail that keeps you on your toes in dry conditions, too.

Between Salmo Ski Hill’s riding and Nelson’s, there are several more choices for mountain biking. But if you want some heart-pumping adrenaline — both for the technical and the beautiful but “I might die here” mandatory features — you want the two rides just south of Whitewater.

Wet Dreams in particular is stunning. This ride’s steep line parallels a mountain creek which runs dangerously high during runoff (think bikes being swept away and turning up mangled — yes, this actually happened) and drops metres below the trail at points during the ride.

The features, including one running at full exposure over the river, can be unpleasant for the faint of heart to even walk, let alone ride. But the full ride is a thing of beauty: a trail made for the camera. That is, if you can get your brakes to stop in time for the shot.

Erie Creek Brewing Company is the newest kid on the West Kootenay brewery block. Staged in an old bank, with a seating area created out of the intact vault room, this taproom and live music lounge opened its doors to Salmo in late 2019.

Brent and I arrived mid-day on a Sunday. We thought this would be just the right time to slide in and find a quiet spot. Our first steps through the door told us otherwise. Nearly all the spaces at Erie Creek were filled. Even the spot on stage was taken by a performer entertaining patrons with Johnny Cash and Bob Dylan-esque songs.

We nearly had to wrestle the couple in line next to us for a spot in the bank vault room. Luckily, a couple of seats opened up just as our flight was served.

Beer pick: Salmon Siding Saison. While Saison is an obvious choice after a few summertime rides, this one had a twist. I don’t know if it was a placebo effect due to its name, but it seemed to have a surprisingly pleasant hint of smoked salmon.

With live music, a bright, open interior, and family-friendly atmosphere, this spot is a great addition to the centre of Salmo.

If you’re in the area anyway, you’re going to hit up Nelson, the headquarters of West Kootenay bikes and beer. I’ll drop a last hint here: if you want West Kootenay bikes and beer info, kill two birds with one stone and head to Backroads Brewing on Baker Street. Brent is not only a mountain biker, but he’s the founder and co-owner of Backroads. Head in for a pint and he might share info on the area’s best rides.

And if Brent’s not there, no problem! Since Backroads is known as the local watering hole for the outdoor crowd, odds are good that you’ll find more than one mountain biker ready to talk business. 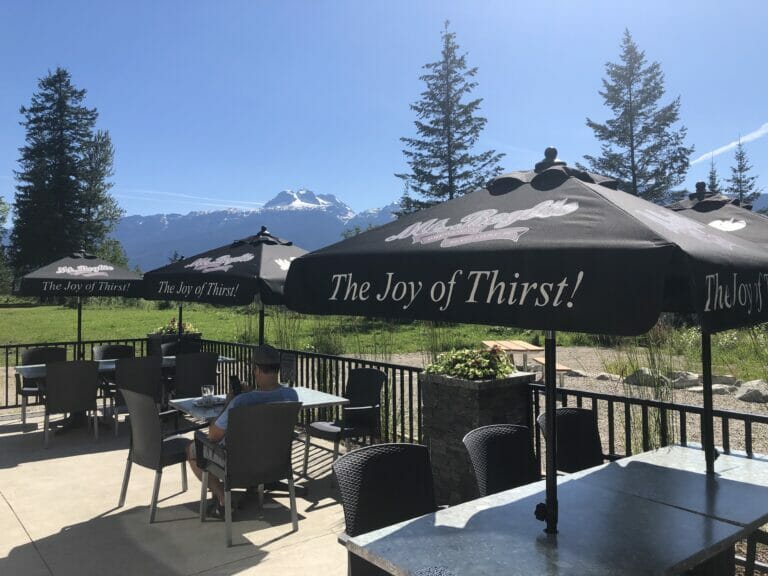 Ales, Trails, and Waterfalls in the East Kootenays

The natural beauty, incredible vistas, and majestic mountains provide a warm and inviting welcome to Golden and Revelstoke in the East Kootenays. Ready for an adventure, my husband John and I decided it was time to hit the road and discover some of the incredible hidden gems in our own backyard in beautiful British Columbia. … Continued