Vancouver Island is a bounty for diverse and unique crops. Stop by any of the numerous bustling farmers’ markets and you’ll find a plethora of hard-to-find Canadian ingredients like olives, figs, kiwis, hazelnuts, chanterelles, and even the decadent truffle. Not to mention the more obvious market favourites such as berries, greens, grains, and fruit.

It’s not surprising to see Vancouver Island chefs incorporating these local delicacies into their menus, however, with the rise of the farm-to-pint movement, we are starting to see locally farmed ingredients showing up in our beer.

From Nanoose Bay to Qualicum Beach, here is a quick culinary guide to mid-island breweries and eateries incorporating locally farmed ingredients into their plates and pints. All of these breweries can be found on the Vancouver Island Part II Ale Trail.

Rusted Rake Brewing co-owners Jodie Gemmell and husband Will Gemmell were no strangers to small but charming Nanoose Bay, Will was actually born and raised in this farming community. So when they stumbled upon a 100-year-old hay farm in foreclosure with no electricity and no infrastructure in the area they decided to move back with a vision of turning the property into a farm-to-table restaurant.

Flash forward 10 years and a lot has changed. Originally, they had planted red fife wheat, vegetables and housed some livestock, all used in their popular restaurant called Rusted Rake. However, in 2019 they were forced to change their business plan due to complicated ALR (Agricultural Land Reserve) rules, hence Rusted Rake Brewery was conceived. The couple reached out to the family for help and Jodie’s sister Jennifer Nichols and husband Craig Nichols jumped on board to create a truly unique gastro-brewery experience. The wheat and vegetables were replaced with 5 acres of barley, the base for all of their beer brewed by David Woodward, a highly experienced brewmaster with over 20 years in the business and plenty of awards under his belt. The use of their own barley, malted less than a kilometer away, allows them to truly control the taste and quality of the main ingredient in their product; a very unique opportunity for a brewery. Not to mention the joy of being able to sit on a patio and overlook a gorgeous field of golden grains that inevitably end up in your glass. Woodward has created six core beers in the line-up: a toasty pale ale, a resiny and tropical IPA, a Mexican-style lager, a luscious coffee stout using locally roasted coffee, a hazy pale ale utilizing their own grown oats, a Belgian witbier, and a spruce tip IPA teeming with locally foraged spruce tips.

In keeping with their restaurant roots, chef Bryce Cowan was kept on to create dishes to accompany the beer menu. Like their previous project, the food is west-coast, unpretentious, and a celebration of the bounty of the island. The Brewhouse Burger is incredible, served with bacon, cheese, an onion/red pepper/jalapeno mix, and their house-made blueberry ketchup with their own grown blueberries. The Smoked Brisket Plate is comfort food at its best with a melt-in-your-mouth slow smoked brisket served with Yorkshire pudding, black garlic demi-glace, spaetzle, and prepared vegetables. Garlic is another crop grown on the farm. The chicken and pickles dish is topped with a dreamy rosemary maple sauce and their homemade pickles. They also serve a Sunday brunch and use a local bakery for their desserts. The space is rustic and welcoming, a comfortable gathering place for locals and travellers looking to experience a little taste of Nanoose Bay.

Another new establishment in Nanoose Bay is Seascape Restaurant, a stunning seafood-focused restaurant with spectacular marina views. It’s always nice to see local seafood on a menu and there are a few stand-out dishes here that include the best from our shores. The steamed clams with shallots and white-wine garlic butter sauce are incredible and the mussels and fries with a cream sauce and house-made focaccia are definitely worth an order. The extensive cocktail menu showcases some great Island made spirits including Duncan’s Stillhead Blackberry Gin and Victoria’s Empress Gin.

Cedars is a rustic restaurant that’s part of the Tigh-Na-Mara resort, a beloved island getaway that’s been in business for over 70 years. Chef Eric Edwards has been at the restaurant since its inception over 30 years ago. “They basically built the restaurant around me,” Edwards said with a hearty laugh. The menu is classic, comfort, and Canadian with hearty dishes like fish & chips, bacon-wrapped meatloaf, and salmon wellington. They also have a pizza oven and make some tasty classic pizza that is popular on their take-out menu. The stand-out dish is the Gemelli Pasta. This decadent pasta bowl uses local Cowichan Valley Pasta, a Vancouver Island company that makes gourmet dried pastas using locally farmed grains. The dish includes plenty of garlic, heirloom tomatoes, green onions, peppers, and spinach topped with some olive oil and cheese.

There is truly nothing better than a good beer paired with good pizza and thankfully the team at Mount Arrowsmith Brewing is doing both exceptionally well. This family-run brewery launched in 2017, setting a very high bar for subsequent breweries in the mid-island region. In 2019 they released their first limited-edition SPRUT – Spruce Tip Brut IPA. This beer utilizes locally harvested Sitka spruce tips from the area. In 2022 this beer won GOLD at the World Beer Cup in the hyper-competitive experimental IPA category. In addition to the beer, Chef Garrett Livesay is creating some exceptional hand-tossed New York-style pizza. The dough incorporates their Jagged Face IPA into the dough, adding complexity and a nice light crust. The house-made buffalo sauce contains the award-winning Arrowsmith Blonde beer. Be sure to order the Kickin’ Chicken Pizza; IPA-infused dough topped with the house-made buffalo blonde ale sauce with shredded chicken thigh, red onions, green peppers, and a habanero ranch drizzle. Pairs perfectly with a cold pint of beer.

Getting excited about healthy food can be hard but luckily chef and owner James Hannah at Realm is changing that. Most known for their tasty bowls, tacos, and their daily “donut of the moment,” the list of local island farms, butchers, bakers, and coffee makers that Hannah works with is long. Burnt Honey ice cream from Nanaimo, Tofino Coffee Roasters as their drip, Vancouver Island Hot Sauce on the tables, and Loveshack Libations beer on the drink menu. The West Coast Bowl is full of island-grown goodness including carrots, beets, sprouts, kale and locally sourced albacore tuna. Definitely order it with their house-made kimchi! Other dishes worth mentioning are the Ramen, made with their homemade bone broth, the grilled fish tacos, and their daily donut.

Despite only being in business for less than a year, this big, bright, purpose-built brewery has already established itself as a must-visit destination on the mid-Island. Fern + Cedar brewer Wes Bain is creating consistently crushable brews with their core line-up including a gently hopped lager, a crisp West coast pale ale, a dark ale, and a New England style IPA. However, the restaurant at Fern & Cedar is worth the visit alone. Head chef Michael Sproul has created an inventive, family-friendly, west-coast leaning menu that includes extremely popular items like the fried chicken sandwich, a huge cod & chips, and a decadent BBQ lamb shoulder. But tucked away in the sides & salads part of the menu are two hidden gems utilizing some amazing local ingredients. The Clam, Crab, and Smoked Salmon Chowder is full of seafood sourced coast to coast with local smoked salmon, clams, and crab from Nova Scotia. Inspired by the local Indigenous community, the Bannock dish is incredible. Light and crispy deep-fried Bannock served alongside a cedar jelly and maple-cranberry preserve. The cedar is picked literally outside the doors of the brewery and the cranberries are from various BC producers.

Truly a hidden gem, De L’Ile is a bakery/fine-dining restaurant that features mostly locally sourced and foraged ingredients, some from their rooftop garden, with an ever-changing menu depending on what is in season. Their multi-course Carte Blanche menu is the best way to experience the skills and creativity of chefs and owners Milena Ficza and Will Cook, two classically trained chefs that have worked in some of the most famous farm-to-table restaurants on the Island including Sooke Harbour House and Glenrosa Farm Restaurant in Metchosin. If you are unable to attend dinner, make sure to stop by during the day to visit the bakery. They use Island-grown grains and mill the flour on site! The Coffee Kombucha Caramel Knot has a cult-like following and the sourdough bread is incredible.

Qualicum Beach Cafe is a stunning seaside restaurant not to be missed on any Island road trip. Their sister restaurant, Water St. Cafe, has been a staple in the Vancouver fine-dining scene since 1988 and the talent and passion are definitely apparent in their creative menu, BC-focused wine list, and incredible service. They use a few local farms in their dishes including Echo Valley potatoes, Fanny Bay oysters, and seafood from Natural Gifts. The seared tuna dish is terrific, and the mushroom gnocchi is perfect.

LoveShack Libations brewer and owner Dave Paul is making some great beer in this very tiny brewery in Qualicum Beach. He has a few mainstays that you can sip inside the tasting room (a Kolsch, a cream ale, a dark IPA, and a porter) but what makes Dave’s beer so unique is his creative seasonal offerings. He often partners with Marie Hopwood, a professor of archaeological anthropology at Vancouver Island University in Duncan. Together they recreate 5000-year-old beer recipes using some local ingredients. They just released Date with a Dynasty, an ale based on an Egyptian beer with emmer and einkorn, two of the first domesticated grains, that Dave sources from Tru Grain based in Cowichan. It is sweetened with dates and dry-hopped with a dukkah spice mix. Dave also often includes locally grown hops in his beer. The recently released I Do Ale is a fresh-hopped IPA with hops that were foraged from four different people’s yards in Parksville Qualicum Beach. 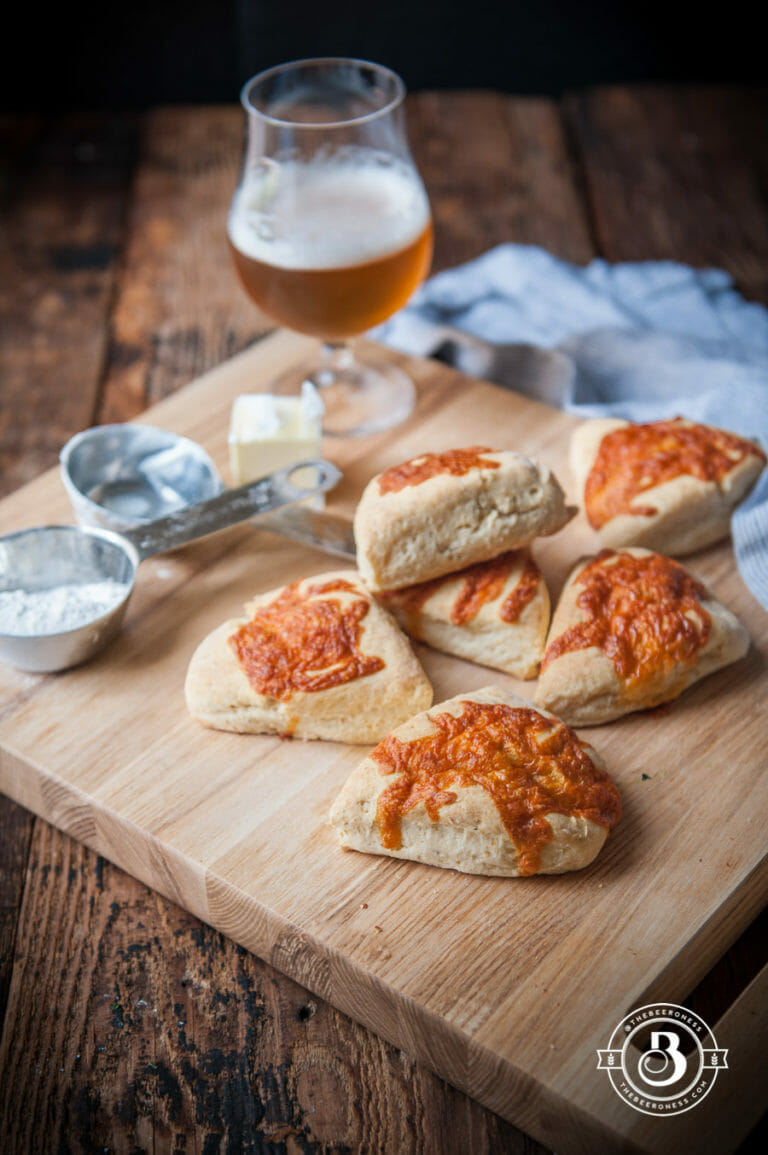 I started to fall in love when I saw they’d named their fermenters after the Golden Girls. Blanche, Rose, Dorothy and Sofia stood in the corner of Steel & Oak Brewing Co., protecting the beer as the yeast began to work it’s magic. The beer, most of which are traditional German lagers, is fantastic. It … Continued 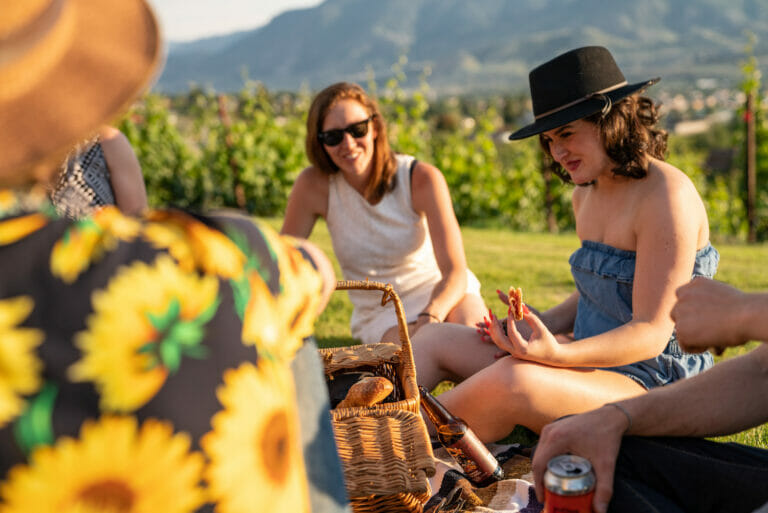 So you think you know what it takes to enjoy a dreamy picnic? This spring, get out to explore BC and find your new favourite craft beer picnic spot. Thanks to a variety of lovely patios and parks where alcohol consumption is allowed, the picnic possibilities are plentiful! Over the last couple years, some municipalities … Continued