Back in 1922, a Bavarian innkeeper named Franz Kugler built a bicycle trail that ran 12 miles from Munich directly to his beerhall, hoping to lure cyclists from the city. But legend has it that 13,000 cyclists showed up on one June day and he didn’t have enough beer for all of them. Acting quickly, he blended beer with lemonade in equal proportions and called the new drink a Radlermass or a “cyclist’s litre.” He assured the bicyclists this would allow them to enjoy a beer and still be able to make their way back to Munich afterwards without falling off the bicycles. And Radlers have been part of German beer culture ever since — and beer and bicycles have been, too.

I love combining two of my great passions in life: craft beer and bicycling. The two go hand in hand (foot on pedal?) for me since I ride bike for exercise to help counteract the calories of the beer I consume both for pleasure and as part of my work writing and talking about beer, and helping to produce beer events like Victoria Beer Week and the upcoming Great Canadian Beer Festival. The beer I envision waiting for me at the end of a long ride is great incentive for the exercise itself, and if that beer might be found at a brewery located near my route, even better. One of the things I look forward to each August is Ryder Hesjedal’s Tour de Victoria, a fun ride that has a beer garden at the finish line serving beer from Spinnakers.

There are lots of great opportunities to bike among breweries on the BC Ale Trail — many cities and towns have developed bicycle routes through their streets, and various regions have made the effort to transform abandoned railway lines into bike trails with the bonus that they usually have low grades since the trains that ran along those tracks couldn’t handle very steep hills.

Even if you are not an avid cyclist, it is easy to cruise between a few breweries in places like Vancouver, Kelowna and Penticton. And if you are a little more ambitious, there are lots of longer tours as well. In this post, I will focus on the Victoria Ale Trail along with some nearby side trips. But before I get started, let me take a moment to remind you that the consumption of alcohol should be done in moderation while cycling, the same as when driving or boating.

Victoria is a great place to cycle thanks to a growing network of separated bike lanes, and as home to 10 breweries and six brewpubs it is obviously also ideal for cycling between breweries, whether it’s an easy jaunt to two or three brewpubs in the downtown area or something more ambitious. The Greater Victoria area also boasts the Galloping Goose and Lochside Regional Trail network, a well maintained system of trails that is part of the Trans-Canada Trail system, extending 88 km in total from Swartz Bay at the top of the Saanich Peninsula through downtown Victoria and then east out to Sooke, and running through beautiful west coast scenery.

A great option for visitors to Victoria is the Hoppy Hour Tour offered by The Pedaler, which visits three different breweries over the course of a three-hour, 9.5-km ride. It includes some food as well as beer samples at each spot, led by a knowledgeable guide who will educate you about beer in the region while keeping you rolling safely.

Or if you do have your own bike, an easy loop around the Upper Harbour and Rock Bay will allow you to visit any of the city’s four iconic downtown brewpubs: Spinnakers, the Moon Under Water, Canoe and Swans. The tasting rooms at Île Sauvage Brewing, Vancouver Island Brewing and Phillips Brewing are also easily accessible by bike along this route, as are the storefronts at Driftwood Brewery and Hoyne Brewing. Obviously, I am not recommending that you stop at all those breweries — maybe just pick two or three over the course of an afternoon.

For a bit of a longer ride, consider cycling out to the 4 Mile Brewpub, a 14 km round trip from the Johnson Street Bridge downtown. This ride will also allow you to stop at Spinnakers, Lighthouse Brewing, while mostly staying off of actual roads thanks to the newly completed E&N Rail Trail, which runs from Esquimalt out to View Royal. More ambitious riders should note that the E&N Rail Trail connects with the Galloping Goose Regional Trail a few kilometres past the 4 Mile.

If longer rides are more your jam, then let me recommend this single-day ride that will allow you to visit three breweries located north of Victoria on the Saanich Peninsula. It follows the Lochside Regional Trail up to Category 12 Brewing in Saanichton, then continues on to Howl Brewing just above the Victoria International Airport, and then returns to Victoria with a final “hydration stop” at the Twa Dogs Brewery at Victoria Caledonian Distillery. Last summer, when I enjoyed this ride with some friends, my brother tagged along for the fun of the ride; he doesn’t drink beer, but he was mighty pleased to be able to sip some whiskey at Victoria Caledonian.

Finally, here is a two-day trip to Sooke, which is home to three breweries, all of which opened in the past three years: Sooke Oceanside Brewery, Sooke Brewing, and Bad Dog Brewing. I enjoyed this ride last summer with some friends — we stopped at a few breweries along the way, stayed overnight, and then returned the next day, stopping at a couple more breweries. Much of it follows the Galloping Goose Regional Trail through forests and along gorgeous lakes or the picturesque coastline of Roche Cove in Sooke. The only stretch that involves some streets is in Langford where we detoured a bit to have lunch at the Axe & Barrel Brewhouse. The total distance is about 100 km round trip.

See you on the bike trails! 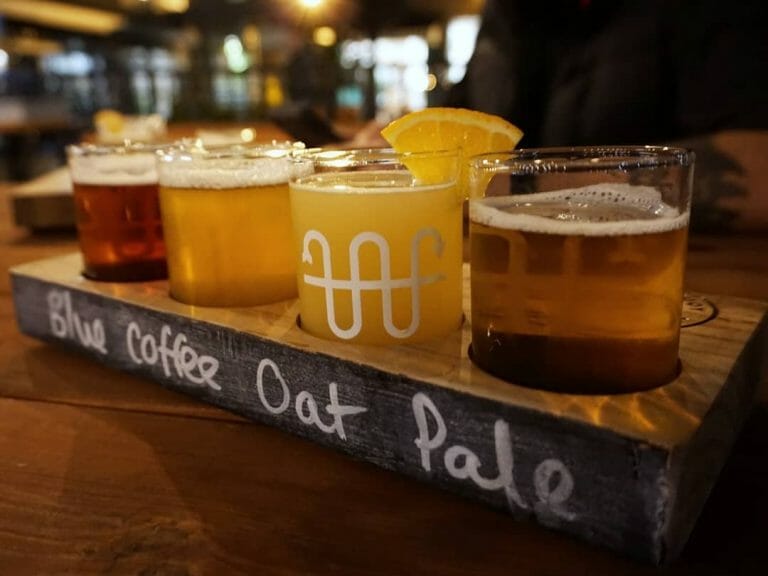 Last November, we teamed up with Destination Greater Victoria to host some beer writers for a weekend visit in conjunction with Winterbrau, an annual event put on by the Canoe Brewpub. One of those writers, Chris from Vanpours, has written a blog about his experiences visiting BC’s “craft beer capital.” Here’s a preview with a … Continued 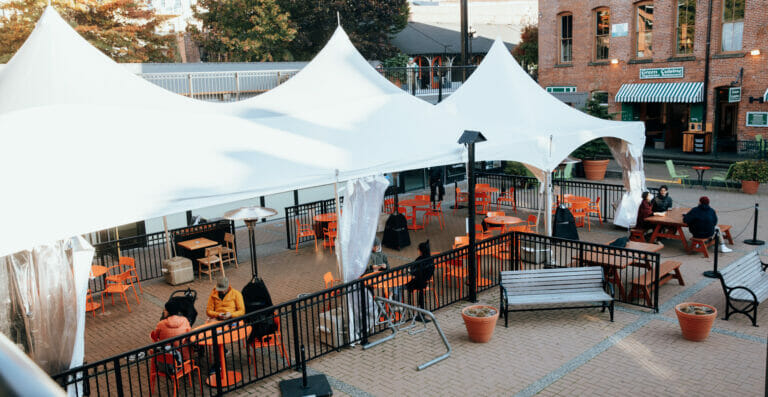 Don’t let the cold, wet weather keep you from enjoying craft beer at your local brewery. One of the ways that many craft breweries have adapted to the COVID-19 pandemic is by expanding their outdoor patios to allow more patrons to visit the brewery and sample beers in person. This has helped to mitigate the … Continued