The feeling of freedom on the open roads is not limited to actors in car commercials. You can re-live those feelings on the scenic secondary highways of British Columbia.

In May, 2019, my intrepid partner Jocelyn and I set out from Vancouver Island on a road trip to visit new-to-us craft breweries in the southern Kootenays with minimal use of the Trans-Canada Highway. British Columbia has approximately 719,000 kilometers of roads. Even though fewer than 58,000 kilometers of those are paved, many of them, as you can discover, lead to beer–with few other vehicles to interrupt your journey.

This isn’t a story about the Okanagan, but I’d be remiss not to mention a few spots on our first day travelling east. After an early morning ferry ride and a drive through the Fraser Valley to the light AM radio crackle of the CBC morning news, we left the Trans-Canada for good at Hope and took Highway 3 (aka the ‘Hope-Princeton’) the rest of the day. This is the route I take each spring to attend the Okanagan Fest of Ale, and while it takes a bit more time compared to the Coquihalla Highway, the exchange in time is more than worth it for the scenery in E.C. Manning Provincial Park (named after a B.C. forester, not the former premier of Alberta), an opportunity to raid fresh B.C. fruit from the fruit stands of Keremeos (pop. 1,500), and for a short detour to the Twisted Hills ‘cider dome’ in Cawston (pop. 1,000). 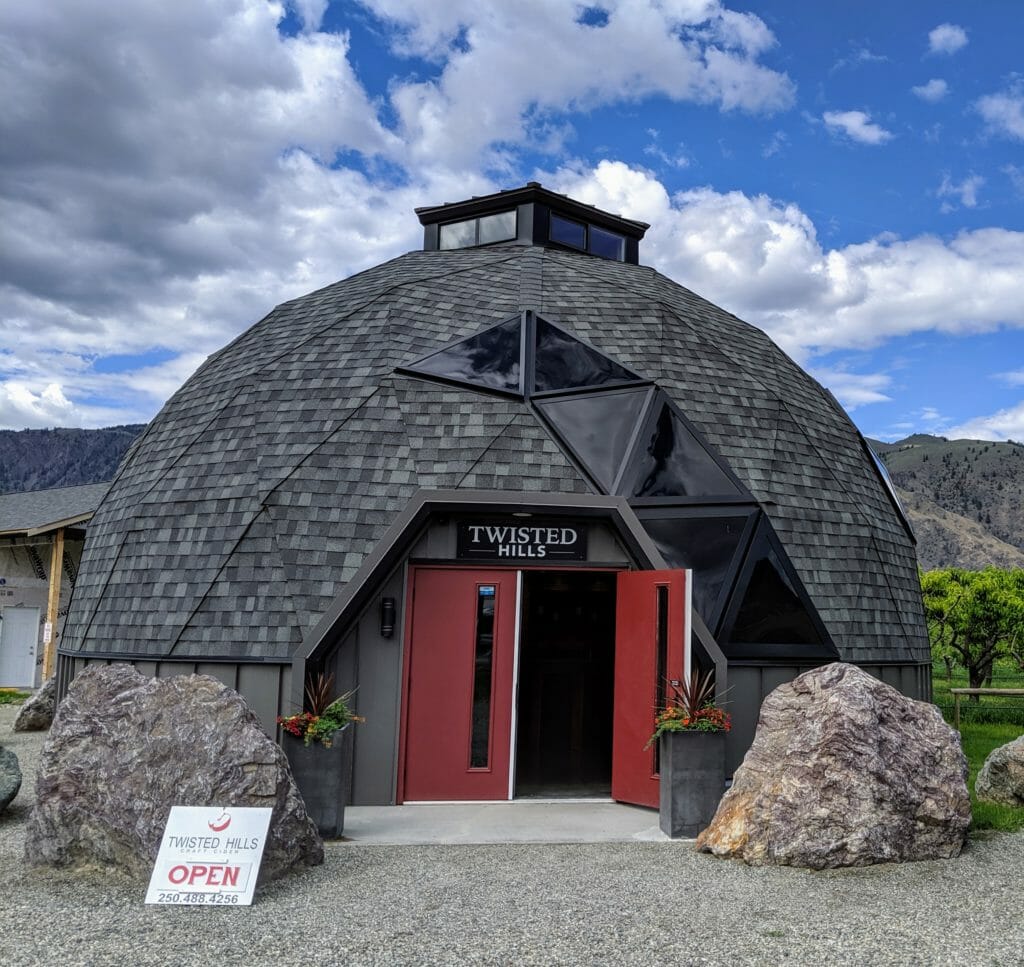 Once we reached Penticton, we left the car at the B&B, ran sockless through the sand at Okanagan Lake, and put shoes back on in order to be appropriately dressed for a few brewery visits. For more information on breweries in Penticton, let the Penticton Ale Trail be your guide.

One of the best outcomes of travel is getting the chance to meet up with old friends. I’ve had the chance to work with DJ Shakes — the gregarious resident Okanagan Fest of Ale DJ — for a number of years at that iconic Penticton festival, and he loaded us up with homemade steam buns for the next portion of our trip. With the aroma of barbequed pork in the trunk and a recently unearthed “Matt’s Rock Mix ’98” CD ready to go into the stereo (road trips are great for rediscovering music), we headed south on Highway 97. The road hugged Skaha and Vaseux lakeshores, and we tried our best to harmonize along with Thrush Hermit and The Watchmen.

It wasn’t long until we hit Oliver–the town, not a pedestrian–and dropped into the Firehall Brewery right as it opened for the day. Firehall ‘Chief Visionary Officer’ and co-owner Danielle Hutton ushered us in. She’s a fantastic host, and we chatted about local beer festivals and laughed at tales of their hapless beer league ball team (of which she was a proud member). I’ve experienced a lot of ‘eureka’ moments while hunched over a bartop, and this day’s epiphany was that a beer league team’s success is inverse of how much fun the team members have before, during, and after games.

The beer was as delicious as our conversations, the downtown downstairs tasting room is funky and fun, and a bottle of Holy Smoke Stout was purchased to bring back to Vancouver Island. Don’t miss this craft beer outpost hootin’ and hollerin’ at you from the middle of wine country. 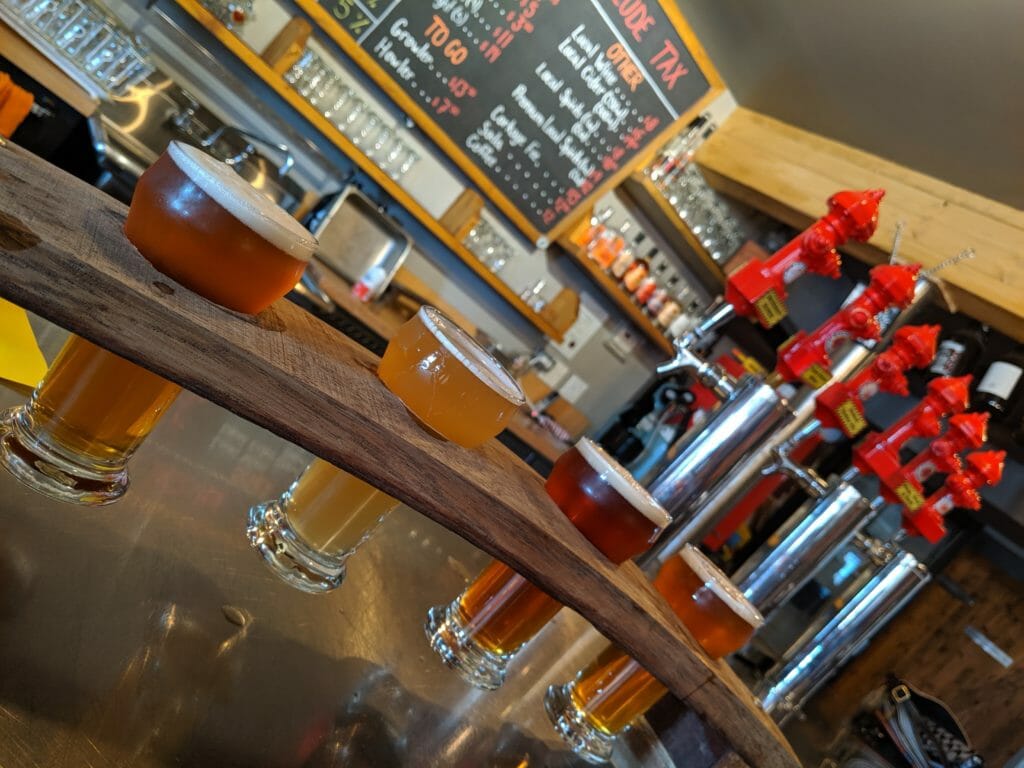 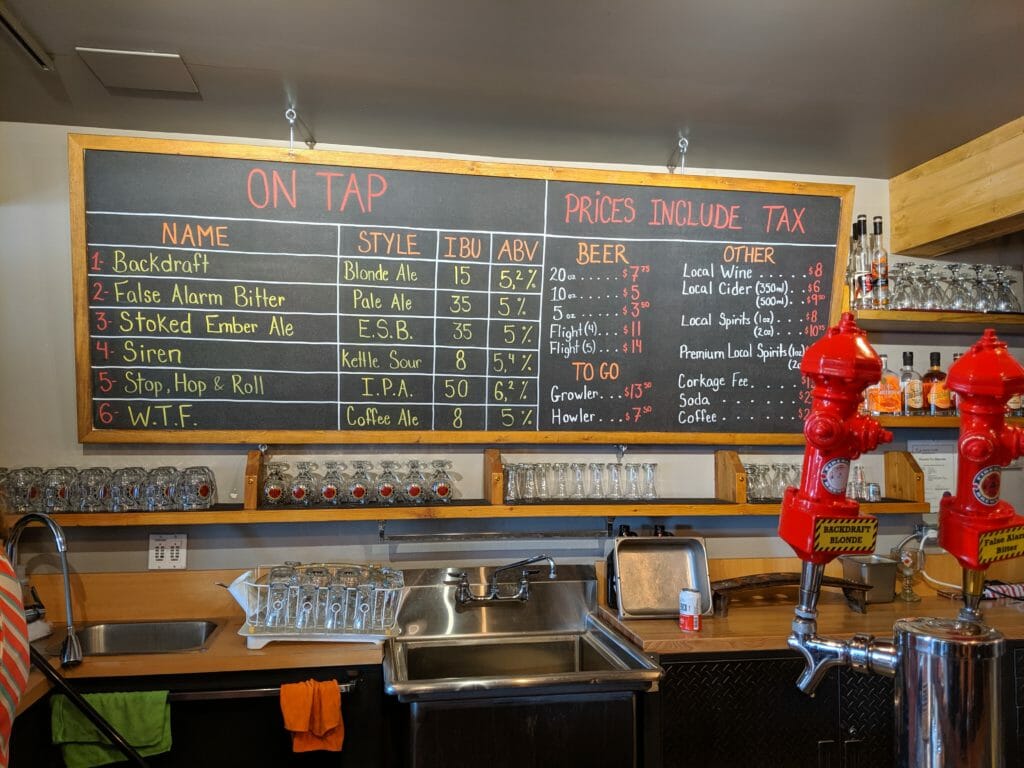 South of Oliver, Highway 97 meets back up with Highway 3 at Osoyoos. Osoyoos is situated in Canada’s only desert: the Okanagan Desert. We stopped for a quick gelato break in order to tell friends and family that we avoided getting our just desserts by not deserting dessert in a desert. 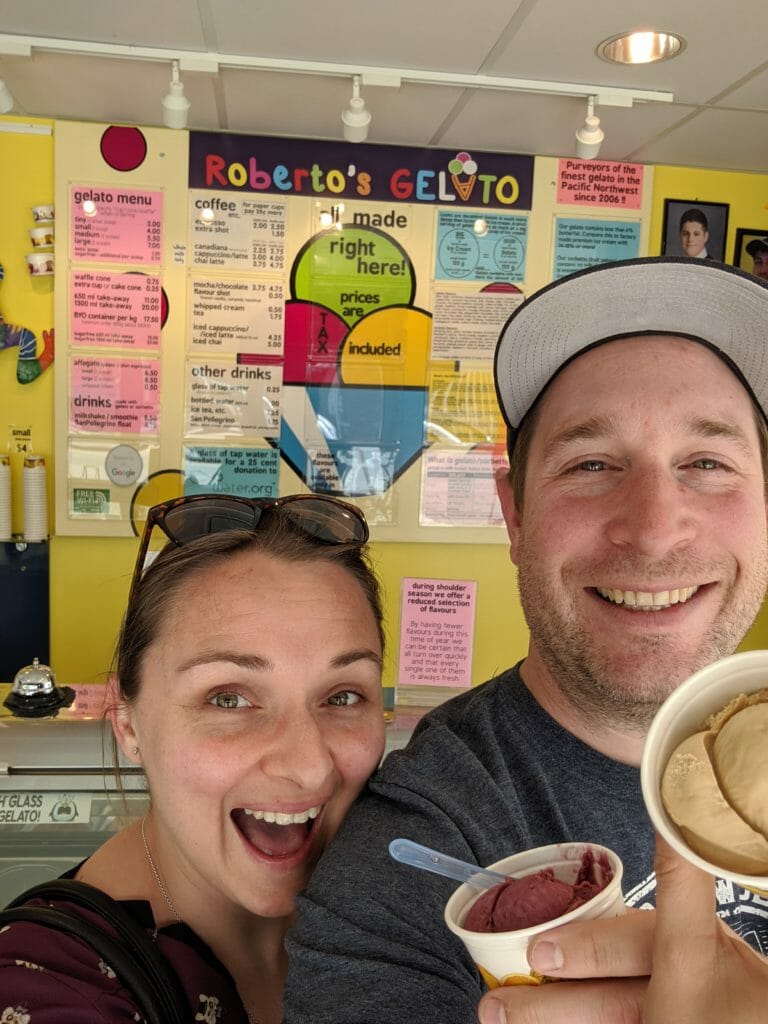 Continuing east, parallel to the Canada/US border, we stop for a snack in Grand Forks and order a voreniki: a pretty substantial Doukhobor take on the perogy.

We arrived in Nelson in the early evening–plenty of time to park the car at the hotel and stretch our legs with a walk down to the waterfront and up main streets lined by stunningly maintained heritage buildings. Add in a dynamite South Indian dinner and visits to three breweries, and it’s pretty easy to see why Nelson is such a draw. The story of craft beer in Nelson was shared recently by the BC Ale Trail, so take a moment to enjoy Roslyne’s deep dive into the Queen City. Nelson is a gem of a town with a ton of recreation opportunities and support for artists, there are fantastic beers brewed here, and I really think you owe it to yourself to visit.

Road trips on secondary roadways and highways give you the opportunity to explore a number of smaller communities–many with interesting histories, some with intriguing names. Our trip from Nelson to Cranbrook took us through Porto Rico, Salmo, Ymir, and Yahk. (Go ahead, read them out loud and see how the person sitting next to you reacts.)

We’re in Rocky Mountain territory now, with a sizeable ascent into Stagleap Provincial Park followed by a descent into Creston, by the Kootenay River, and past Moyie Lake as part of the day’s drive.

By this time, it has really sunk in how little of our province is developed and settled by humans. We switch our car’s clock into Mountain Standard Time shortly before reaching Cranbrook: the easternmost point on our trip.

If the craft beer revolution sprung out of coastal cities such as Victoria and Vancouver, it’s fair to say that you can judge how effectively it has spread by taking in the beer scene at the other end of the province. We’ve got friends in town who offer to chauffeur us to a trio of their favourite beer spots: Fire Hall Kitchen & Tap, a taproom in a refreshed heritage fire hall offering 20 taps of craft beer from around the province; Fisher Peak Brewing at The Heid Out Restaurant & Brewhouse, where I let tears of joy flow down my cheeks upon reading the words “Bourbon Barrel Aged Scottish Ale” on the menu; and, in nearby Kimberley, Over Time Beer Works, which is mere minutes from the Kimberley Alpine Resort. Game 6 of the NBA Eastern Conference Finals was on above the bar, so we joined in with the locals to cheer on the Toronto Raptors to a series-clinching victory.

There are a couple of routes one could take from Cranbrook to Kaslo, but one involves taking a ferry. You better believe we Islanders weren’t going to miss out on giving an inland ferry a try.

After driving back from Cranbrook to Creston, we headed north on Highway 3A. It’s not a quick road, but it’s a fun one, snaking through forested hills alongside Kootenay Lake. If I had a motorbike, I’d be bringing it back here the split-second summer hit. This highway ends up at the Kootenay Lake ferry, which goes between Kootenay Bay on the east side of the lake and Balfour on the west side. It’s quite a nice cruise, and I’m smitten by the homemade treats in the coffee shop–a vastly different culinary experience from the ferries to-and-from Vancouver Island and the mainland.

The 30-minute drive from Balfour to Kaslo–Highway 31–follows the west side of Kootenay Lake, passing the popular Ainsworth Hot Springs on the way. 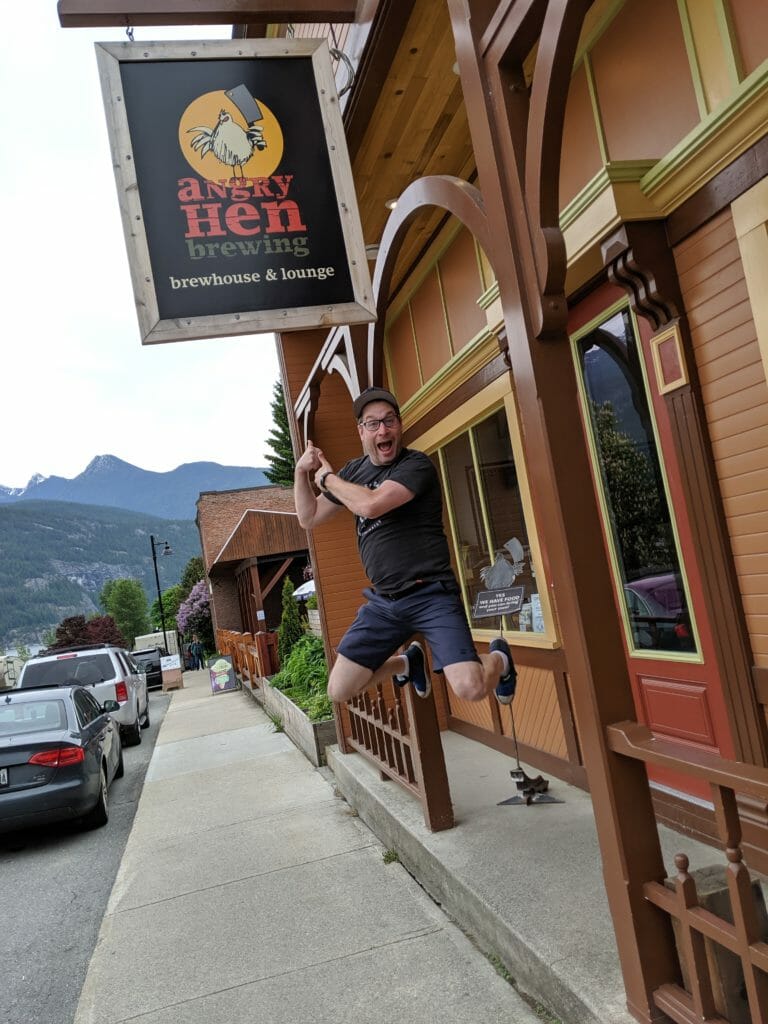 It’s a claim I’m happy to make because of the career accomplishments of head brewer and co-owner Shirley Warne. She’s been brewing and working in the craft beer industry for more than 30 years, including in Toronto (Amsterdam Brewery), Halifax, and Vancouver (Steamworks, Big Ridge). Highly-respected BC brewers Conrad Gmoser (Brassneck) and Harley Smith (Longwood) were just two of the brewers mentored by Shirley. Now, the craft beer scene that she had such a hand contributing to is, in a way, paying her back. It’s a scene that has expanded to the point where opening a craft brewery in a village of 1,000 people is a viable proposition. She traded in opportunities to ply her trade in traffic-jammed metropolises for a chance to brew in a community that features only one traffic light. We had the chance to share some beers on the patio with her, and if you get the chance to as well, it’s a peak-BC-craft-beer experience. 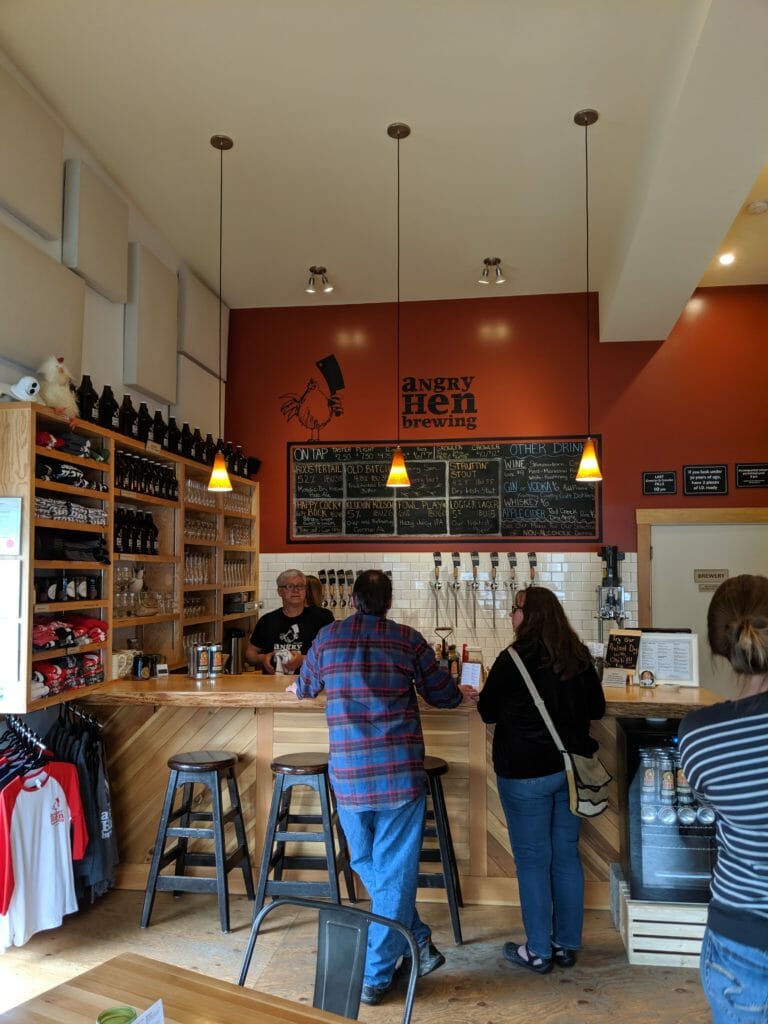 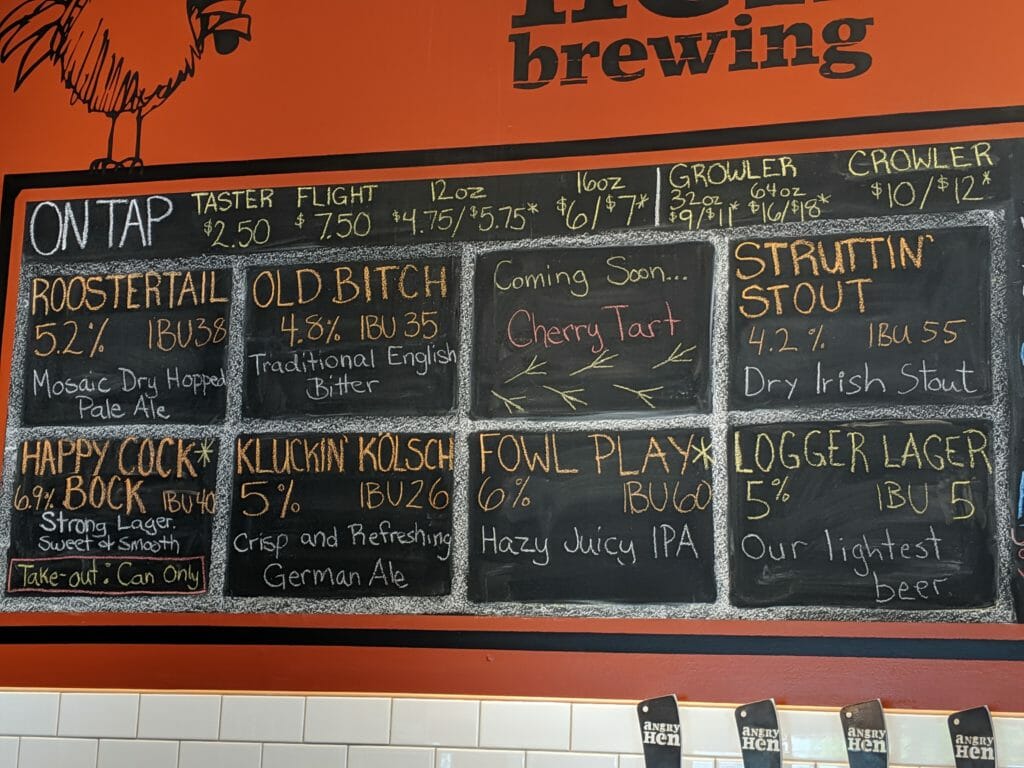 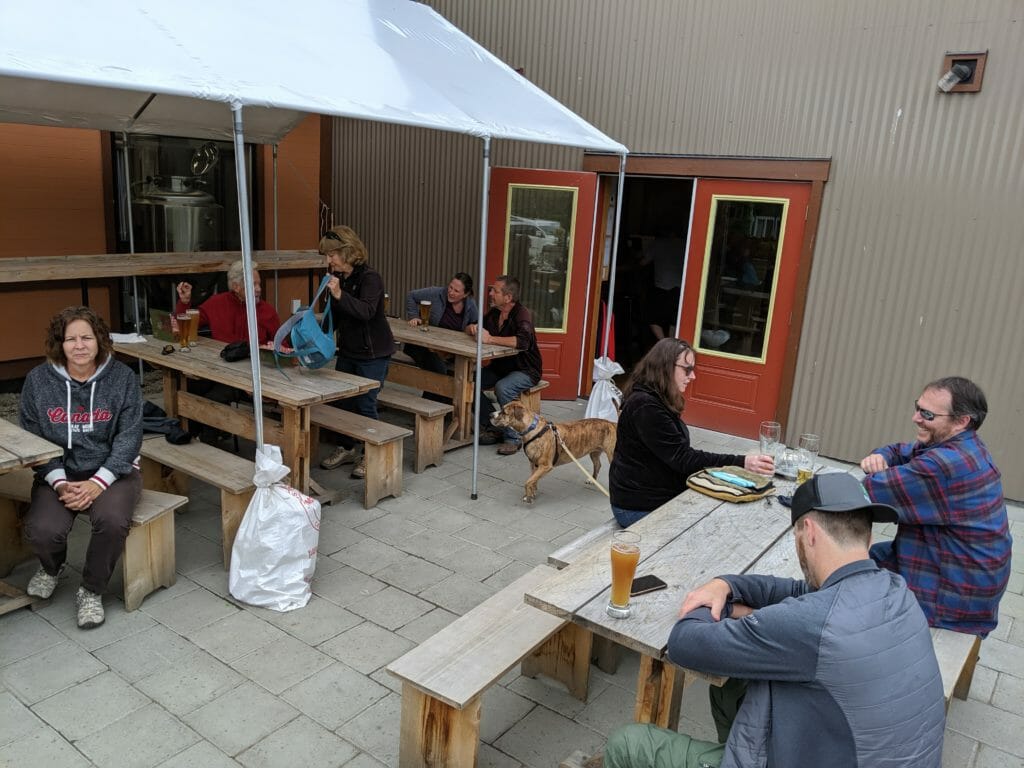 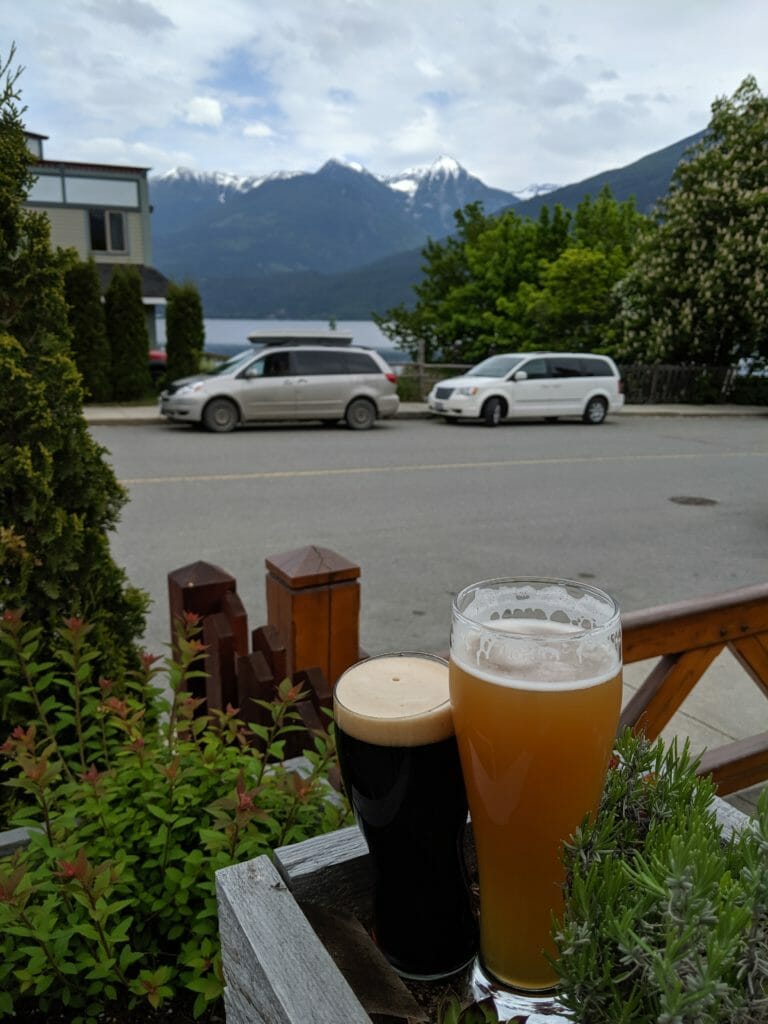 The Kootenays in all their splendour

Open roads, forested mountains, fish-full lakes and rivers, creative cuisines, countless recreation opportunities: it’s pretty easy to slip comfortably into the pace and natural wonder of the southern Kootenays. Thanks to a growing collection of quality breweries, craft beer can be added to your list of reasons to visit. Dig out those 90’s-era mix CDs and get your motor running! 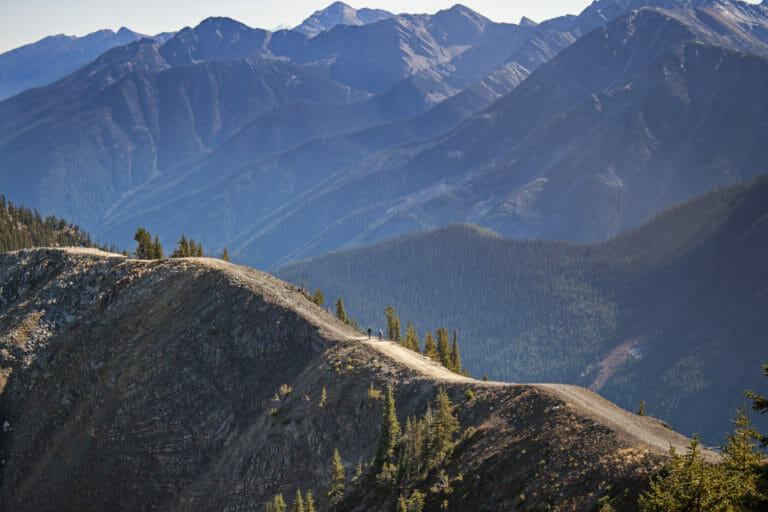 The best travel experiences are often self-guided explorations that offer the greatest opportunity for unexpected discoveries. Let the BC Ale Trail be your guide as Gina Bégin explores the Kootenay Rockies East Ale Trail. 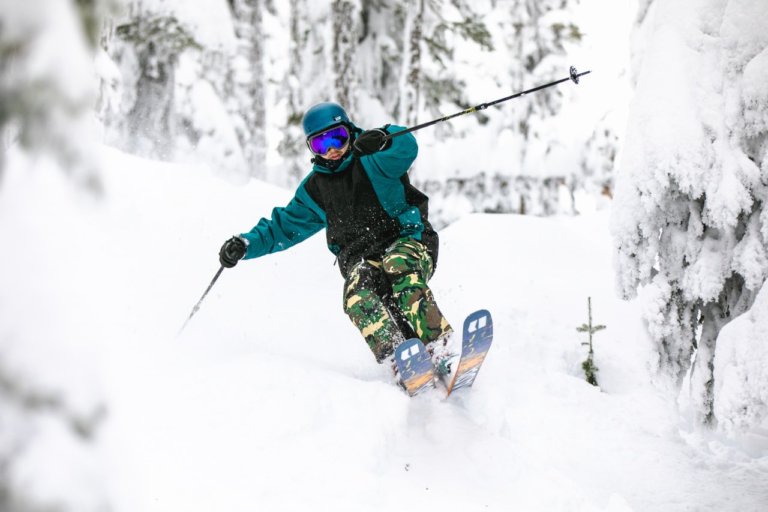 Shredding and Beer: A Match Made in Hoppy Heaven

Whether it’s cracking open an IPA after a bottomless day in the backcountry, or guzzling a post-fatbike pint, not much can beat the feeling of a chilled après beer on a pow day. Keen to get a closer look at why shredding pairs so well with beer, I interviewed five beer-loving, BC-based riders to get … Continued