March 8 is International Women’s Day and more than 35 BC breweries are brewing up a special beer to showcase women as well as inclusion and diversity in the craft beer industry in BC.

Back in 2013, the thought of women gathering together all over British Columbia to brew a special batch of beer seemed like such a daunting task. After all, you could count on one hand the number of women brewing beer in BC! In that year, the now annual Pink Boots Collaboration Brew was launched in the U.S. with the idea of creating a Women’s Day Brew as a way to provide awareness of women in the brewing industry. It also became a fundraiser for the Pink Boots Society where scholarships were created to help educate more women to get into the industry.

British Columbia took part in 2015 when Claire Wilson, who at the time was the owner and head brewer of Dogwood Brewing in Vancouver, hosted the sole Collaboration Brew in the province. Since then it has become an annual event with more and more breweries hosting Women’s Day Brews and more and more women getting involved in the industry.

Due to ongoing Covid concerns this year, there was not a lot of full-scale collaboration between breweries and the community, but BC still has 20 Pink Boots Collaboration Brews being released during March and April along with at least 15 other  International Women’s Day releases in all areas of the province.

This is Year Two for  Farm Country Brewing hosting an International Women’s Day event challenge where women at each of the Langley breweries were asked to collaborate on a small-batch brew for a tap takeover at Farm Country on March 8.  There are eight unique beers and all proceeds will be donated to the Ishtar Women’s  Resource Society in Langley. The doors open at 12:00 pm, and many of these beers will be exclusive to this event.

This year Locality Brewing collaborated with some of the women from the Barley Merchant Taproom and brewed up a “No Bull” 6.7% ABV Milkshake IPA, so expect to have the beer available on one of the taps there, and it will also be coming out in cans.

Once again, the team of KPU Brewing Diploma students under the guidance of instructors Nancy More and Martina Solana Bielen hosted their Pink Boots Collaboration Brew Day on Feb. 11, 2022. Also joining on brew day was KPU alumna Ashley Brooks, QC manager at Four Winds Brewing, and Kristina Mameli from The Growler BC. The KPU Brew team decided to create a Hibiscus Rose Brut Ale in honour of recently retired dean, Dr. Betty Worobec, who led the way in creating Kwantlen Polytechnic University’s (KPU) Brewing & Brewery Operations Diploma, the first and only program of its kind in BC. Aptly named Betty Boots, the beer is available in cans at KPU and on draught at the Farm Country event.

Here is a list of the breweries pouring at Farm Country Brewing on March 8:

Vancouver still hosts the most International Women’s Day Brews, but this year Patina Brewing in Coquitlam also got on board. Since more than 75% of their staff are women, it just made sense.

This was the first year that the women at Patina Brewing got together for an International Women’s Day brew, and they enjoyed it so much they are planning on making it a yearly tradition. This year they went for a small 20L batch, so you will need to head over soon to catch this beer on tap at their location. The beer choice was a Smoothie sour with additions of peach and raspberry.

Under the lead of Molly Graham at 33 Acres Brewing, the Fem-Identifying production members and a few friends from the industry brewed a special Dry Hopped Kolsch named The Good Fight in celebration of International Womxn’s Day. A portion of the proceeds will be donated to The Shoe Project, a Canadian organization whose mission is to help refugee and immigrant women-identifying people who are new to Canada by providing a writing and performance program to help learn communication skills in English and to aid in their success in this country.

The women behind Luppolo Brewing, from the brewer to the owners, tasting room staff, and social media gathered together and created a very unique beer, or should I say a beer cocktail: a French 75 cocktail. Available in cans and on draught.

This is Year Two for Head Brewer  Sarah Polkinghorne of Black Kettle Brewing leading a collaboration brew day. She chose to work with the Pink Boots Hop Blend to brew up a Hazy IPA. It will be launching on March 8th along with the beginning of Black Kettle’s Live Music program. Only available on draught at the brewery.

This will be Year Five for Tanya Crocker and the women at Coast Mountain Brewing. Like last year, this year’s Hazy Pale Ale brew used the Pink Boots Hop Blend and a crazy addition of peach sours. Last year’s batch was so popular that this year they brewed a double batch. It will be available in cans and draught.

The Okanagan: Kelowna and Penticton

Co-owner Gale Armour of Lakesider Brewing partook in her first IWD collaboration brew at Penticton’s Slackwater Brewing prior to her brewery being open in 2019. She has been wanting to host one ever since and this was the year. It was also a great opportunity for their brewing assistant, Chila Ashida, to lead her first brew day! Also invited were a few women from Unleashed Brewing, also in Kelowna. They wanted to brew something floral and playful in honor of International Women’s Day so they worked with the Pink Boot’s hop blend’s floral characteristics. The result is a blueberry hibiscus saison. Available in cans and on draught.

It’s time for another JILLKNIFE takeover at Jackknife Brewing! Head over for the release of “Resting Witch Face” from 5 pm – 8 pm. This year’s version is a blueberry, black currant farmhouse ale. Proceeds from this beer will go towards ongoing work for raising awareness and funds for local MMIW initiatives.

Owner Susi Foerg of Rustic Reel Brewing has put together an all-women evening event with speakers, activities, laughter, specialty cocktails, and of course great beer. There are also a variety of workshops hosted by local Kelowna women that one can attend as part of the evening. Workshops include cocktail making, charcuterie board how-to, mental + emotional + fitness wellness, as well as financial and organizational tips for entrepreneurs. Tickets are available through Rustic Reel.

Slackwater Brewing is back for its third annual installment in support of the Pink Boots Society with a four-pack mixer featuring an Apricot Hazy Pale Ale (5% ABV) and Imperial Sour with Pomegranate and Plum (7% ABV), both dry-hopped with this year’s Yakima Chief Hops Pink Boots hop blend. The beers in this exclusive mix pack were designed by the women in the brewery’s workforce.⁠

The owners and brewers of Neighbourhood Brewing have been wanting to be a part of an International Women’s Day Collaboration for quite some time. The head brewer, originally from Yellow Dog Brewing in Port Moody, and the owners, just could never squeeze the time or space for one, but with the opening of Neighbourhood, they now can. Several meetings were had with the women collective to decide on what beer they wanted to see (and drink) in the taproom at Neighbourhood that would also complement the hops, and the decision was a Tart IPA with lemon peel. It will be available in cans and on draught.

And over on the Island…

Three breweries to keep track of (and maybe more) over on Vancouver Island will be brewing up some unique beers during the weeks around International Women’s Day. This is the first year hosting a Women’s Day brew for all of them.

Head Brewer Robin Miles at Dog Mountain Brewing and her team will be getting together on March 12th to brew “Stand and Be True”, a hazy Westcoast IPA that will be available in cans and on draught. Expect to see this beer every year now with a change of hops.

Quality Control/Lab Technician Jaime Korner at Phillips Brewing is new to the brewing industry and thought a brew day would be a great opportunity to showcase women at Phillips. Their beer of choice is a Brut IPA with butterfly pea flower and pomegranate. It is bound to be tasty and colourful.

When the women at Longwood Brewery realized that over 50% of their staff are women. Everything is still in the planning stage but expect to see something come out in the weeks ahead.

And the brews continue…

That is quite the list — there are so many opportunities to explore your local communities and celebrate women in craft beer! 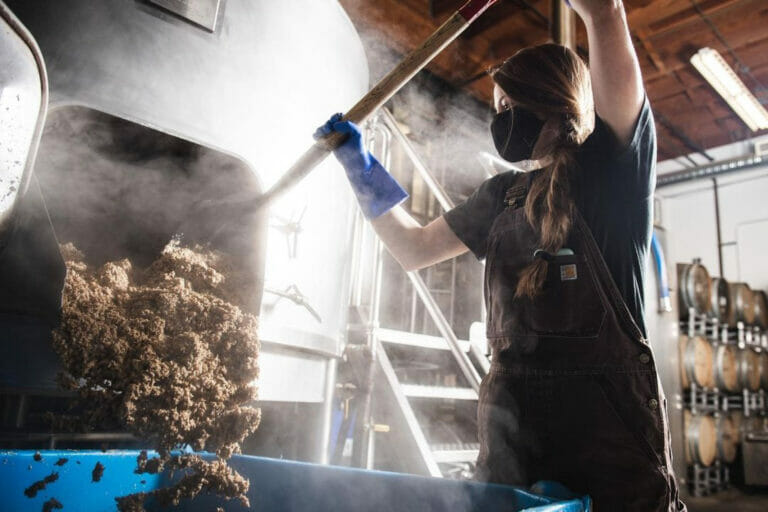 March 8 is International Women’s Day and many BC breweries are brewing up a special beer to showcase women in craft beer. The annual Pink Boots Collaboration Brew on March 8 started off in 2013 as a way to provide awareness of women in the brewing industry and to raise money for the Pink Boots … Continued 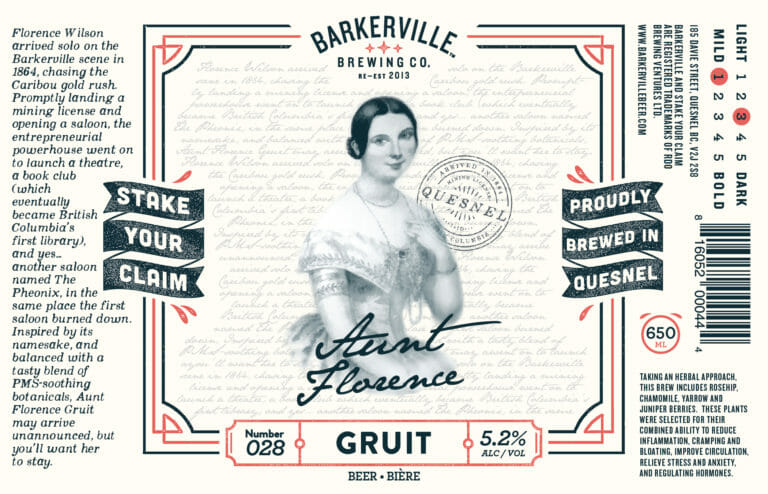 To celebrate International Women’s Day (IWD), held every year on March 8th, women of the brewing world usually get together for a special collaboration brew day. Often organized by chapters of the Pink Boots Society®, an organization created to “assist, inspire, and encourage women beer industry professionals to advance their careers through education,” these brew … Continued 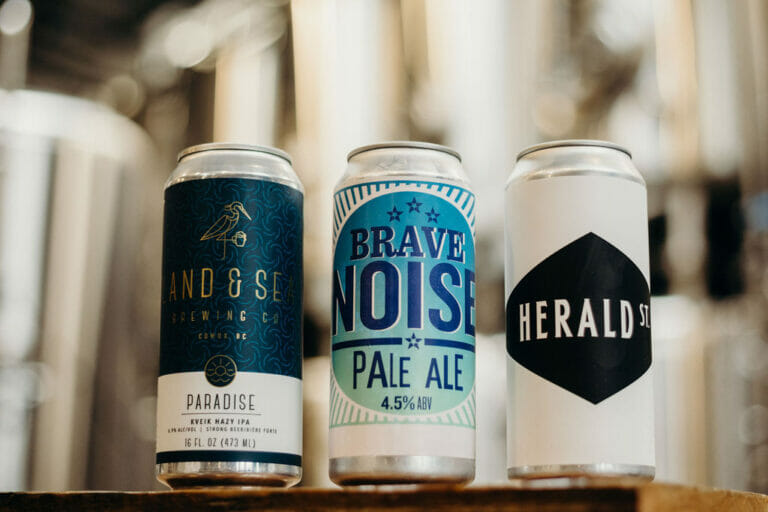