I Like Beer the Podcast is produced by a team of five friends who have taken their love of craft beer from a hobby to a passion to a podcast.

Based in San Diego, they have spent many years enjoying the local breweries in that world-renowned craft beer destination. In the summer of 2016, two of them discussed how fun it would be to rent a van and travel across the state visiting breweries. As teachers, they had spring breaks off together, so for spring break in 2017, four of them were on their way, joined by all their spouses. A fifth couple met up with them along the way, and their journey began.

After touring California, Oregon and Washington, they found themselves on a beach in Mexico, discussing how much they enjoy drinking great beer and telling stories. That was the genesis moment for I Like Beer the Podcast.

Every year since then, the PGW Crew (“Parents Gone Wild”) have planned an annual spring break trip to visit a different beer destination. Back in 2020, they intended to travel north of the border to check out British Columbia, but, of course, COVID cancelled those plans. 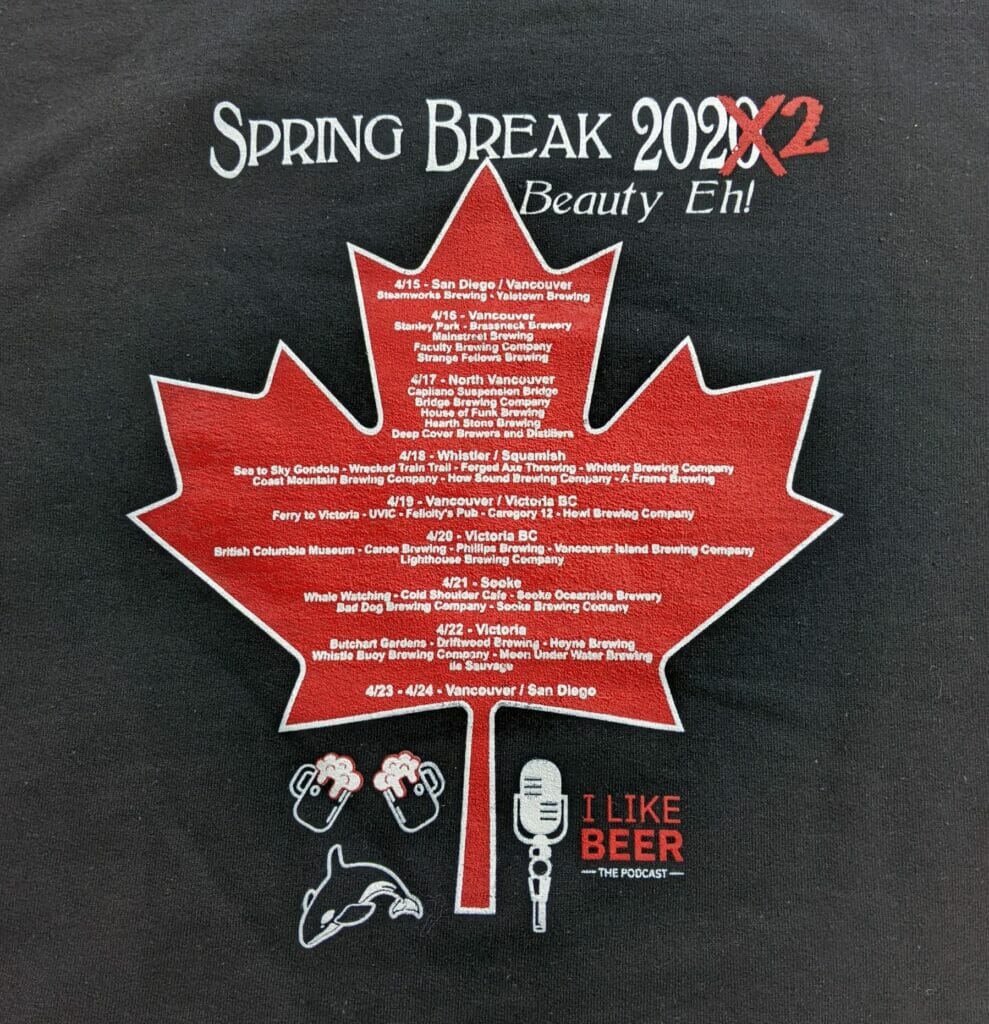 Two years later, they finally made it to Canada! All in all, they visited more than 20 different breweries and taphouses in Vancouver, Squamish, Whistler, and Victoria. They conducted interviews at six of the breweries, which they released in three separate podcast episodes. There were 16 people (8 couples) in total on the trip so the logistics were quite complicated. They even had branded hoodies with their intended itinerary printed on the back.

They spent their first full day in Squamish and Whistler. The team took the Sea to Sky Gondola up to the peak to view Howe Sound and stomp around in the snow.

“Snow, of course for us San Diegans, has a magical effect on us turning us giddy!” said Jeff Spanier, one of the members of the podcast team. “To our delight, there was a beer at the summit! We enjoyed several pitchers of local brew before heading down and continuing on to Whistler.”

There, they went to Forged Axe Throwing to throw axes and enjoy beer and embrace their inner lumberjacks.

“Over cans of Whistler Brewing‘s Lumberjack Kveik ale we learned that we may not be lumberjack material. We had a lot of fun, but clearly the trees are safe with us.”

Easter Sunday was spent at Capilano Suspension Bridge Park, including brunch at the Cliff House Restaurant and a stroll atop the trees. They also managed to build in a visit to Strange Fellows Brewing in Vancouver where they recorded an interview.

Amazingly, they only had one rainy day the entire trip — and luckily, it was a day they had planned to visit breweries all day. They enjoyed breakfast at the Granville Island Public Market followed by stops at Liberty Distillery, Faculty Brewing, Brassneck Brewery, and Main Street Brewing.

The first podcast episode they released after their return to San Diego featured interviews with Mauricio Lozano at Faculty Brewing and Conrad Gmoser at Brassneck.

After a couple of days visiting North Vancouver, Squamish and Whistler, they took the ferry across the Salish Sea to Vancouver Island where they spent a few days based in Victoria. One of their non-beer goals was to see some orca in the wild.

“On our previous trip to the San Juan Islands, we struck out,” lamented Jeff Spanier. “Not this time! Our whale watching guide made sure we found a pod, and we were in awe at the spectacle of a pod moving along the shore in unison.”

A half day at the Butchart Gardens was another BC spectacle they were glad they didn’t pass on. Same to be said for drinks at the Empress Hotel.

The second episode they posted following their trip featured Strange Fellows Brewing in Vancouver and Phillips Brewing in Victoria.

As part of their time in Victoria they visited the nearby community of Sooke where they visited Sooke Oceanside Brewery and Bad Dog Brewing.

“The long country road to Bad Dog Brewing made half our group feel certain that we were heading to our doom. Random ‘Brewery Ahead’ signs as we traversed deeper into the woods set off alarm bells inspired by every horror movie we’ve ever seen. All for nothing, Bad Dog Brewing was an amazing find!”

They managed to pack in a lot of brewery visits over their time in Victoria, including stops at Whistle Buoy Brewing, Herald Street Brew Works, Phillips Brewing, and Lighthouse Brewing.

The third and final episode they recorded features interviews with Gary Lindsay at Driftwood Brewery and Jeff Wright at Vancouver Island Brewing.

All in all, the “Parents Gone Wild” crew from San Diego had a great experience visiting British Columbia, and say they hope to return again soon since they feel like they only just scratched the surface of the BC craft beer scene.

“We definitely had our full American tourist on whenever an eagle flew by. The spectacle of all 16 of us eating ice cream, pointing frantically in the air while yelling ‘Bald Eagles!’ must have been humorous for the regulars. A truly American Tourist Moment.”

“We found Canadians — everywhere we went — just as polite, helpful and pleasant as reported. We are from a tourist town, and I am afraid we might not always be so wonderful and accommodating. We will work harder at that!”

As a follow-up to their visit, I joined the gang remotely: listen to this episode to hear our conversation about their trip and the BC Ale Trail. 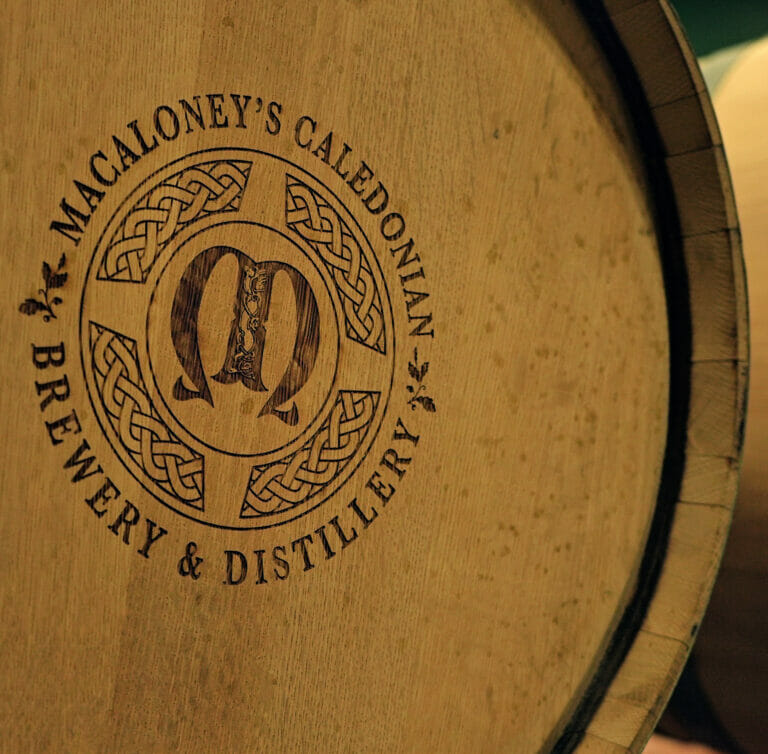 From Beer to Spirits: 5 Victoria Breweries that Distill

Last year, Victoria author Marianne Scott published The Distilleries of Vancouver Island—a Guided Tour of West Coast Craft and Artisan Spirits. Here she writes about some of those distilleries that are based in breweries in the Greater Victoria area. Macaloney’s Caledonian Distillery and Twa Dogs Brewery “Whisky is basically beer—without the hops—and distilled at least … Continued