If you know anyone who lives on Vancouver Island – or if you’re an Islander yourself – you’ll be familiar with the term “up island.” This can mean anything from a half-hour’s drive north of Victoria over the Malahat to the five-and-a-half hour long haul up to Port Hardy. And there’s a whole lot to see and do in between.

Living in Victoria, it’s hard not to feel spoiled by all the amazing craft breweries in the immediate vicinity. But, having lived in small towns most of my life, sometimes I crave getting out of the “big city” and being reminded of what it’s like to live in a tight-knit community.

Luckily, accessing great beers with a small-town feel is just a couple of hours’ drive away. And every time I make it up island, I get a taste of all that this lovely place has to offer, from spectacular views to historic locations full of friendly folks and plenty of delectable eats and drinks.

On this particular trip up island with my partner, our destination was the Comox Valley, midway up the eastern coastline. (For a sneak peek of the trip out to the western coast, check out how the Ale Trail is taking shape along the Pacific Rim Highway.)

Made up of three main communities, Comox, Courtenay, and Cumberland, the Valley is home to about 66,000 people. There are plenty of things to do in the area, including outdoor activities like hiking, biking, swimming, fishing, rock climbing, camping, and much more. Mt. Washington Alpine Resort and Strathcona Provincial Park are within throwing distance as well. The region is also home to a few craft breweries, catering to locals and visitors alike and focusing on keeping the communities they call home thriving.

Become a “Cumberlander for a day” at Cumberland Brewing Company

Our first visit was to Cumberland Brewing, located in the heart of the small, historic town of Cumberland, BC. Cumberland was at the centre of the coal mining industry’s boom in the late 1800s and has strong ties to the wealthy Dunsmuir family, which made its fortune through the mines. The village of 3,600 residents is full of old, quaint company houses and remnants of days long gone. But Cumberland is really known for its exquisite mountain biking trails. 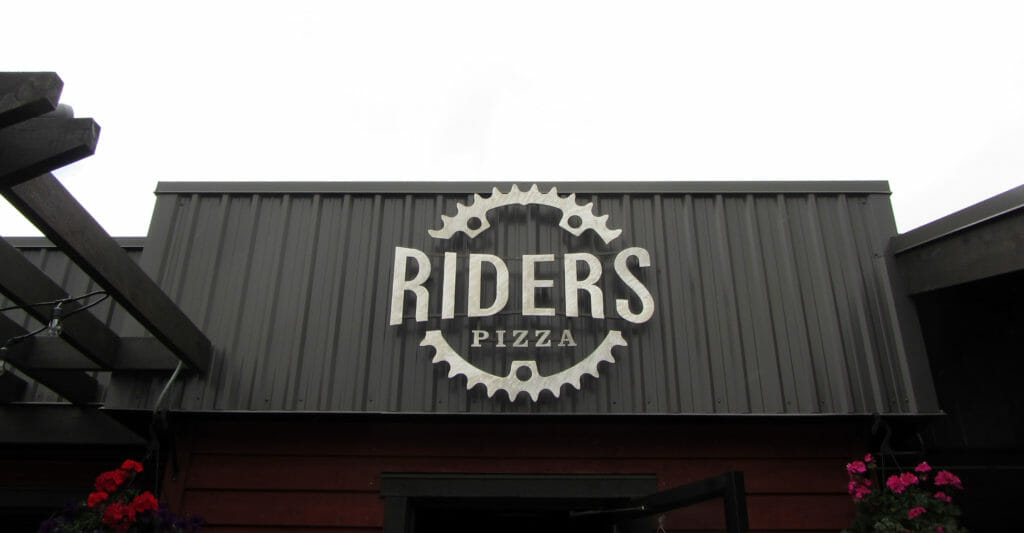 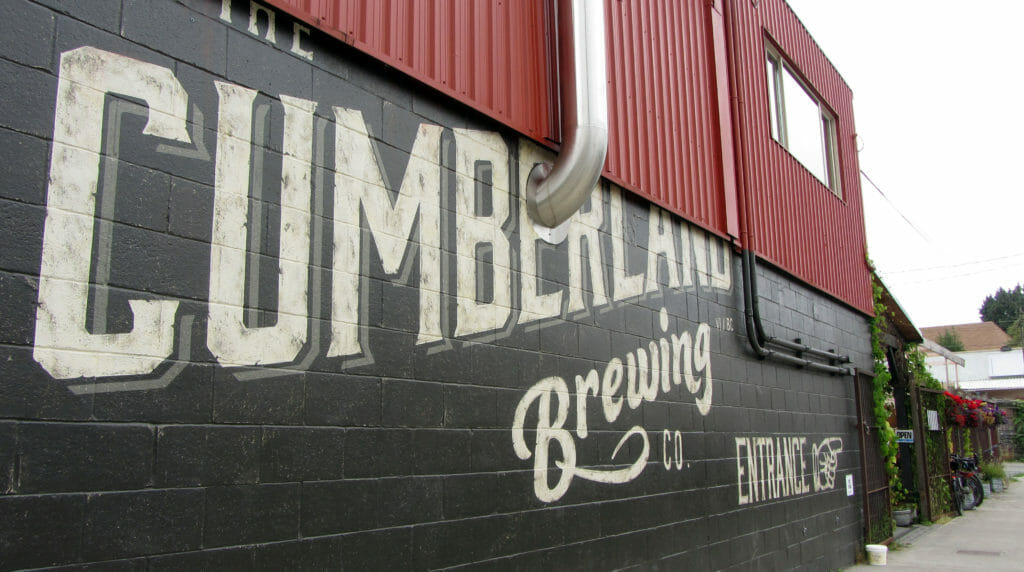 Established in 2014, Cumberland Brewing offers full draught service, growler fills, a family-friendly establishment, guided tours, brewery merchandise, and a partnering pizzeria right across the street. Its core beers, as well as a rotating selection of special brews and casks, are waiting to be sampled upon arrival. 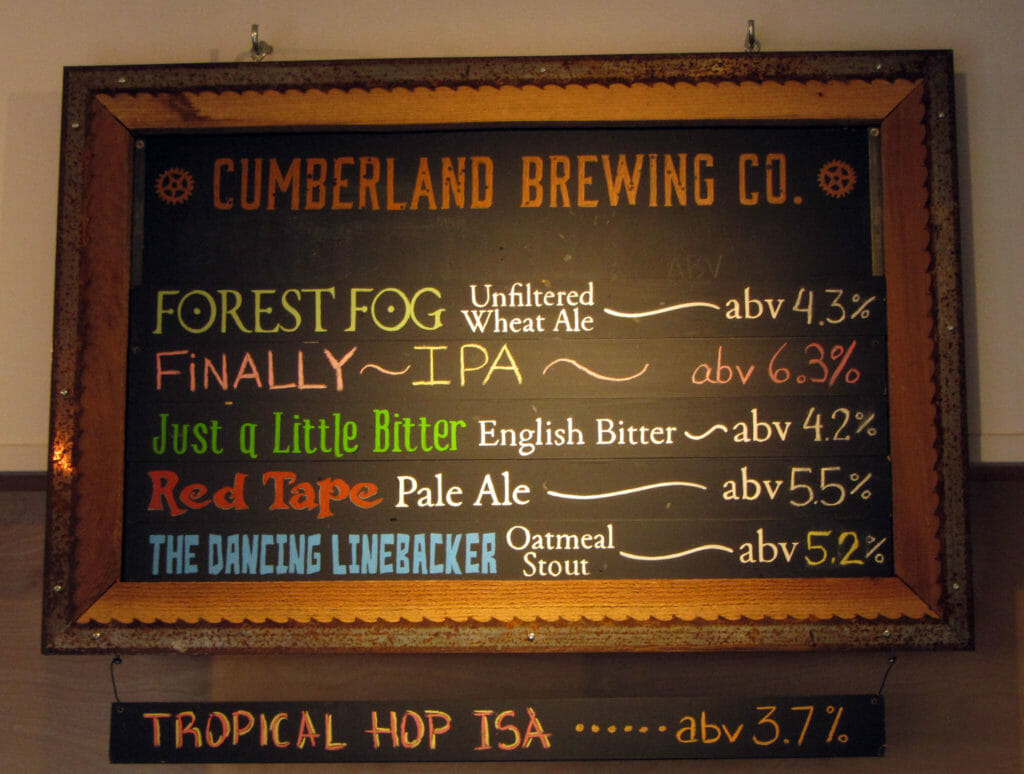 Darren, one of the partners behind Cumberland Brewing and Riders Pizza (and “the guy that sells the beer”), is a driving force behind the vision of the businesses. With a focus on giving back to the community and really being a public house for Cumberlanders, his love of the area and passion for what he’s doing is evident in the operations he runs.

Cumberland Brewing supports three local initiatives, one that protects Cumberland’s wilderness (CCFS), one that makes that wilderness accessible to the public (UROC), and another that tells the story of Cumberland over the centuries (Cumberland Museum and Archives). In fact, the brewery donates $0.25 of every litre of Forest Fog sold straight to supporting the Cumberland Forest that’s working to preserve the mature coastal forest surrounding the village of Cumberland.

What’s also great is that it’s a space for everyone, from young and old to hardcore mountain bikers to families with kids. And you feel like you fit right in, which is the whole point, according to Darren. “When you’re here, you’re a Cumberlander for the day.” The service is friendly and genuine, the space is cozy and welcoming, whether you sit inside or on the patio, and at a capacity of just 49 people, you’ll be sure to make some new friends here.

With no distribution plans, beyond the growler fills and occasional keg delivery within Valley limits, Cumberland Brewing is a real embodiment of the spirit of the Ale Trail: you have to travel here to try this beer. And trust me when I say it’s worth the trip. 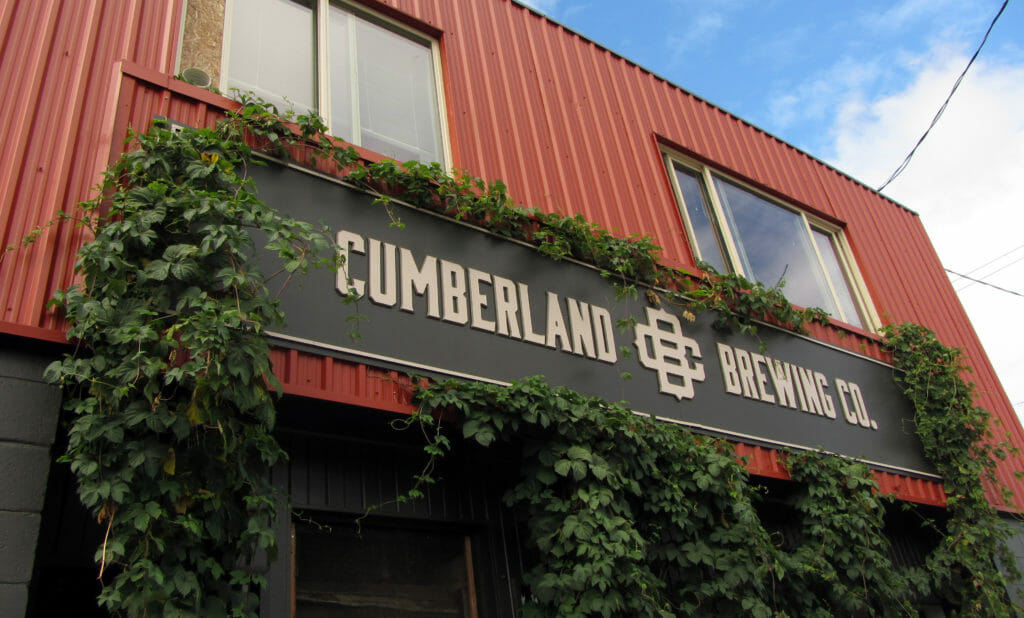 After splitting some delicious tapas and a diverse flight of tasters, we drove 10 km further north to the city of Courtenay which is home to Gladstone Brewing Company and Forbidden Brewing Co.

With stunning vistas of the mainland mountains, Courtenay is a picturesque little city. Catch a ferry to Denman and Hornby Islands in nearby Buckley Bay, or from Comox to the Sunshine Coast on the mainland. Our first stop in Courtenay was Gladstone Brewing for a pint and a pizza. 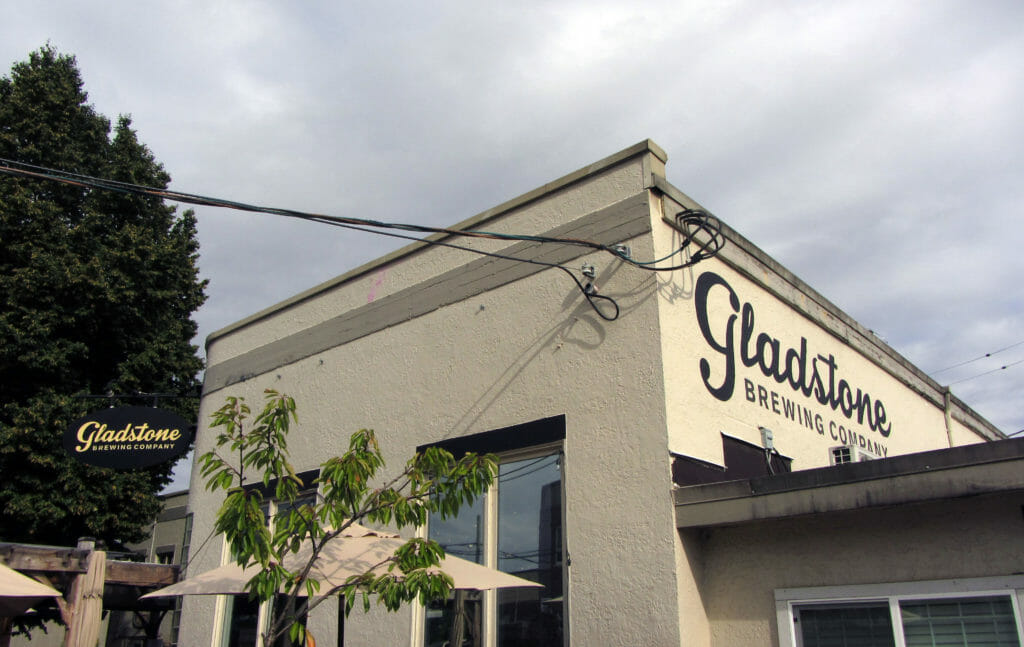 Started in Victoria in a garage on Gladstone Avenue, Gladstone Brewing has become a staple attraction in downtown Courtenay. The brewery was established in 2015 and shares their space with Pizzeria Guerilla, offering Italian style pizzas with locally sourced ingredients to go along with a flight or pint. 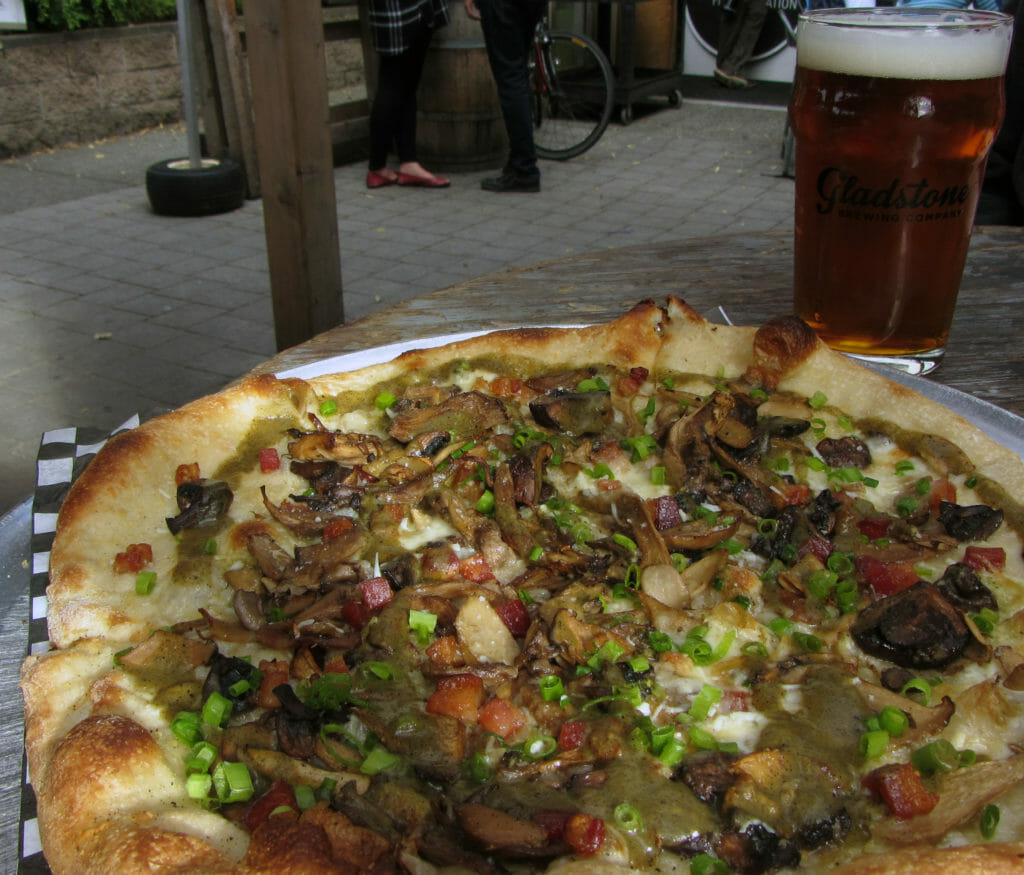 Old car parts and other automobile memorabilia line the tasting room at Gladstone, an homage to the space’s history as a car mechanic’s shop (and a reincarnation of Gladstone’s humble beginnings). Featuring eight styles on tap in the lounge, the brewery has a taste of something for everyone, from a Gose to a Brett Saison to an IPA and ISA to a couple of Belgian styles to a porter and a pilsner. Visitors can fill a growler or grab a four-pack of canned beers to go. 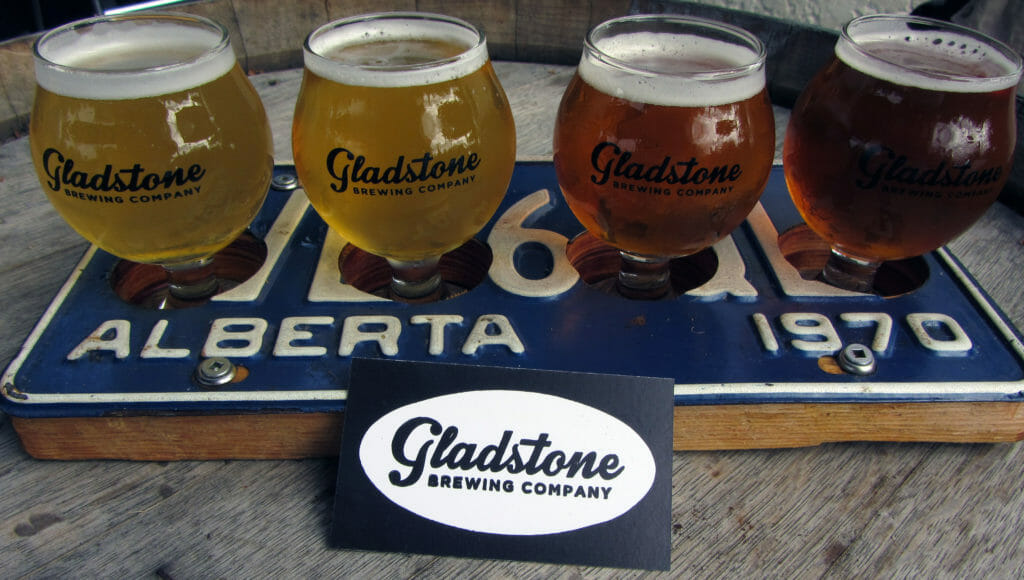 The patio space has long tables to sit and share with fellow imbibers, as well as cozier tables made of upturned barrels, and the inside offers a view of where the beer gets made, with long tables and patio lights giving it a shabby-chic atmosphere. It’s easy to tell that Gladstone is a popular gathering place for residents and visitors alike. 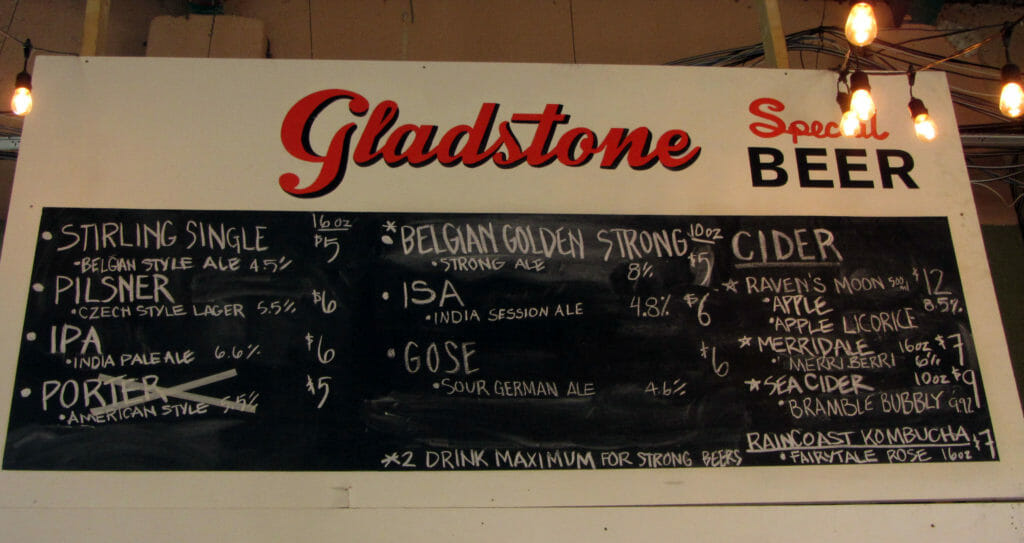 For other places to grab a bite, nearby Atlas Cafe, Bigfoot Donuts, and Locals Restaurant are must-trys according to the locals.

Our last stop was at Forbidden Brewing, a nano-brewery established in 2015 and located in Courtenay’s Westerley Hotel. Because of its small operating space, the brewery focuses on being hyper-local. 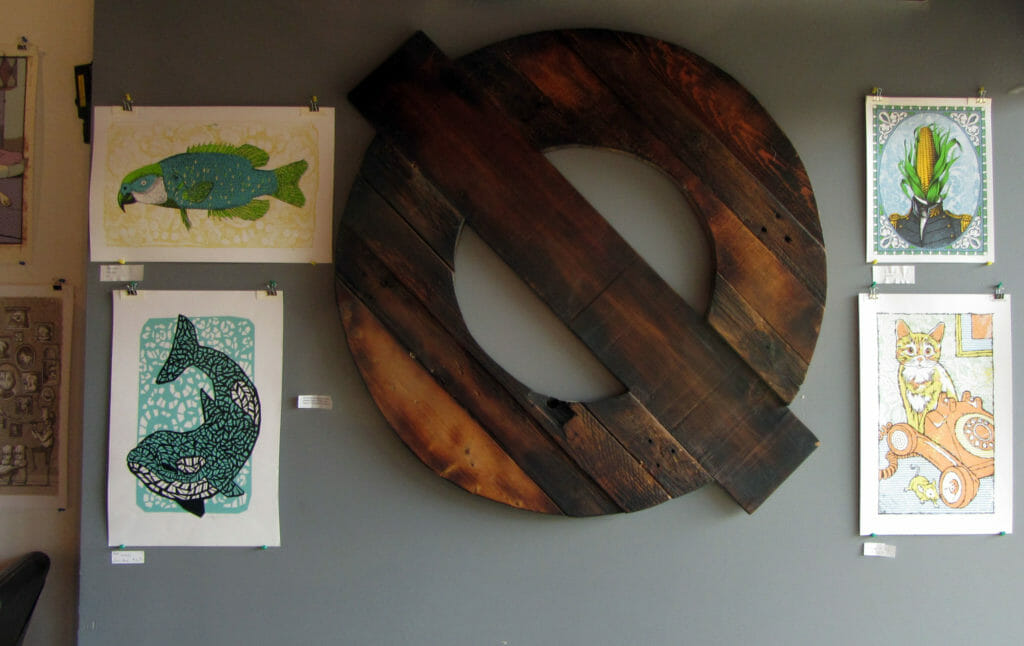 Forbidden is a bit more intimate than the previous two stops and has a more lounge-y feel to it. With art prints lining the walls, a pool table, and the weekly live jazz night, the tasting room gives off a cool, modern, more sultry vibe. And Forbidden is unique in more ways as well. 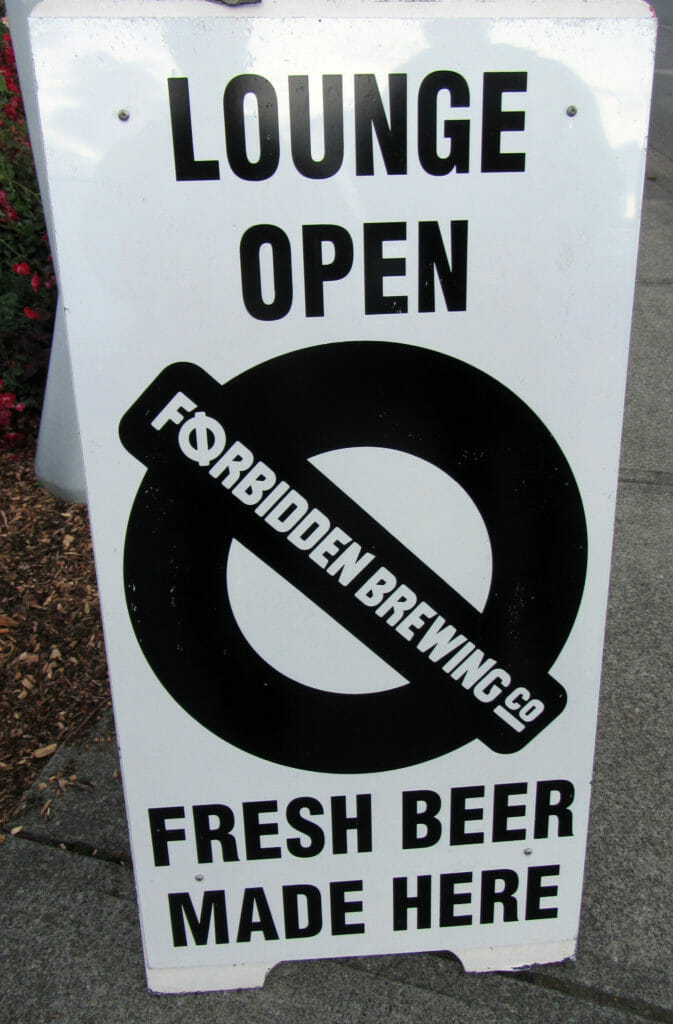 The beer is made in six kettles that need to be brewed three times each in order to produce a full batch of beer. The head brewer started as a homebrewer and has creative free rein to make some truly special beers, including some with English influence due to his background. They also want to focus on organic beers, offering an organic pale ale at the moment and hoping to brew additional styles as proper supplies become more accessible. 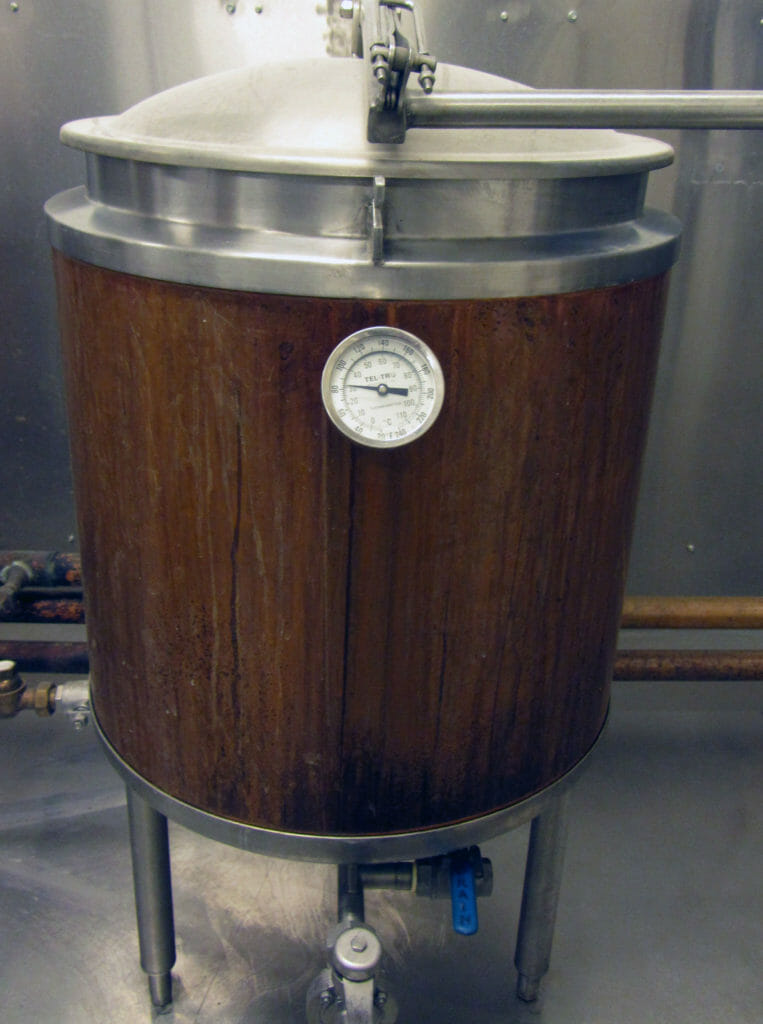 With five partners, all with day jobs in a vast range of industries, Forbidden is a true passion project that is looking to grow in its own way. Michael, one of the partners and instigators of the whole idea, built the long wooden bar himself. He bought the kettles and built the cold room is currently working on securing investment to support the brewery in its growth. 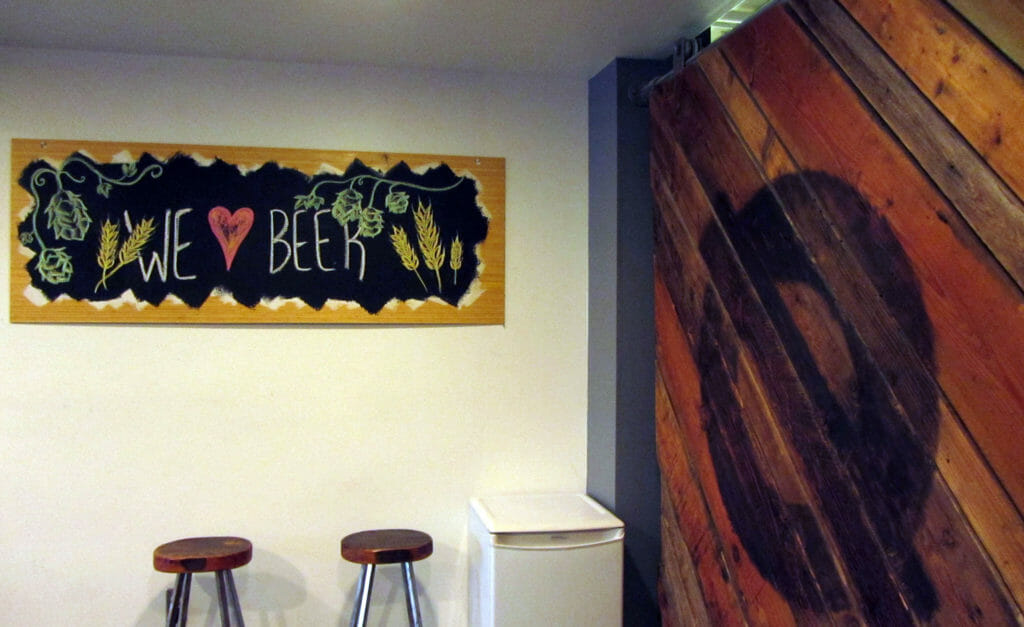 As I sat and chatted with Michael about the brewery, my partner was busy making friends with an older gentleman at the bar. “It’s like family,” said a jazz musician who popped in for a pint while we were there. And that is truly the atmosphere in the place, as if you’re going to hang out with family and friends, grab a pint, and have some laughs, even if it’s among strangers.

Even a quick trip up island like this one serves as a great reminder of the spectacular place I’m so lucky to live in and the communities that make Vancouver Island what it is.

Something that I’ve always found special about the craft beer industry is how many variations exist in combining four basic ingredients. And I’ve always found it interesting how those variations are paralleled in the breweries that brew them and in the communities that they support and are supported by. Each one is unique, with its own particular story, its own particular personalities, and its own path to growth. And that is so evident in these three breweries.

If you’re in the mood for more great beer, combined with exploring the beautiful coastline of this province, continue on the Ale Trail to the Sunshine Coast directly from Comox or head back down south to discover what Nanaimo and the surrounding area has to offer. 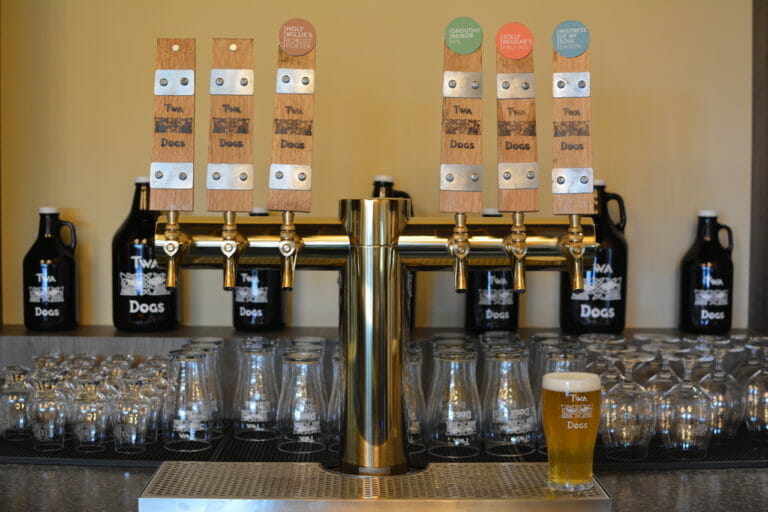 The newest brewery-distillery in Greater Victoria has set up shop in Saanich with a Scotsman and an Australian at the helm and copper pot stills in the back. Just off the Pat Bay Highway, which takes you to the BC Ferries terminal at Swartz Bay, step inside this new tasting lounge at Victoria Caledonian Brewery … Continued 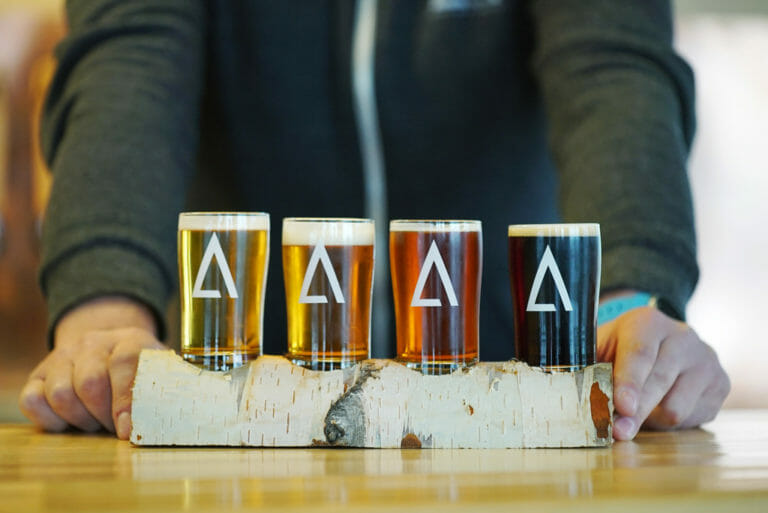 Okanagan Fest of Ale returns for its 23rd year Festivals are a key element of the craft beer experience. Nowadays in BC there seems to be a beer-related event almost every weekend. This wasn’t always the case, however. Way back in the mid-1990s there were just a few events that showcased the early pioneers of craft … Continued