Abbotsford is in the heart of the Fraser Valley and an easy day trip from Vancouver.

What started out as a Sunday drive in search of berry farms and lunch with my mom ended up being a foray into exploring part of the Ale Trail, with brewery hopping and feasting on locally sourced fare.

All in Abbotsford you say? Absolutely!

It didn’t take much convincing to switch plans…

The first exit off of Highway 1 into Abbotsford is Mt Lehman and fortuitously, with little effort we stumbled on our first brewery of the day, Old Abbey Ales.

My mom, being a recent sour beer convert, had to try Old Abbey’s Sour Raspberry Ale which has won the brewery a few awards since it opened in early 2015. I know that early on when they first started making that beer the raspberries were locally sourced, so that counts as having found our berries right?

After a quick taster and a bomber to go, we were onto the next stop. 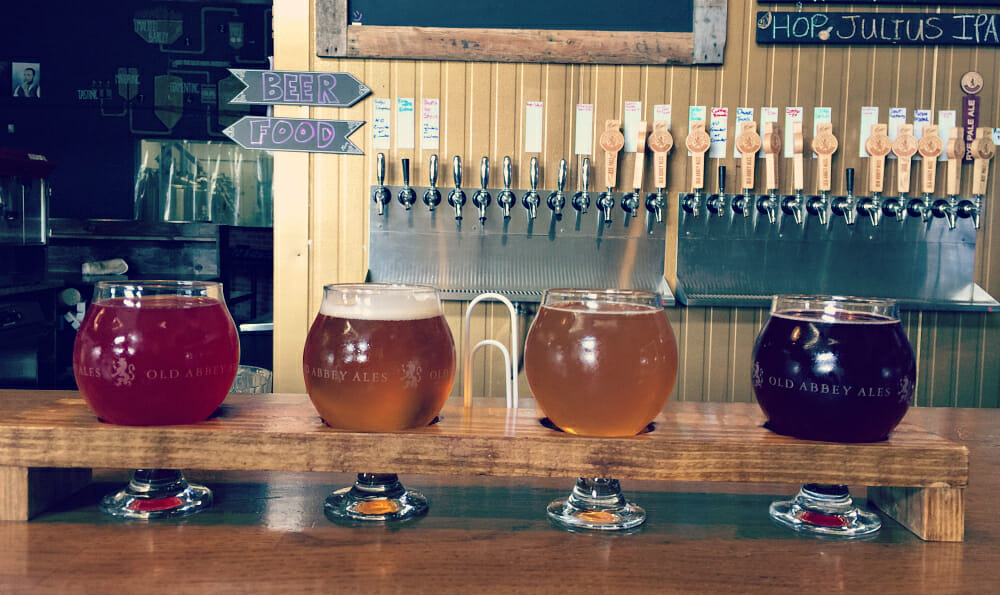 Committed to working with our neighbours…

Ravens Brewing Co, which opened in June 2015, is just down the road.

Inspired by the agricultural roots surrounding the Abbotsford area, Ravens works with local growers to craft their beers.

“Recently we have switched over all our hops in the West Coast Pale Ale to 100-per-cent Abbotsford hops and whenever possible, source our hops and fruit locally,” explains sales manager John DeJong.

Ravens also works with local businesses on collaboration beers such as the ChocolaTas Hot Chocolate Porter and the Oldhand Coffee IPA. On our visit to the tasting room we found some lovely summer beers on tap like their Strawberry Rhubarb Sour, Raspberry Hefeweizen and Grapefruit Radler, along with the always tasty Dark Mild and previously mentioned West Coast Pale Ale.

To pair with your flights, Ravens offers samosas and pakoras from local business Patna Sweets, along with ChocolaTas chocolates and other beer snacks. In the spirit of giving back to the community, they recently donated a portion of proceeds from their Strawberry Rhubarb Sour to the Multiple Sclerosis Foundation and raised funds for both Canuck Place and Abbotsford Community Resources. 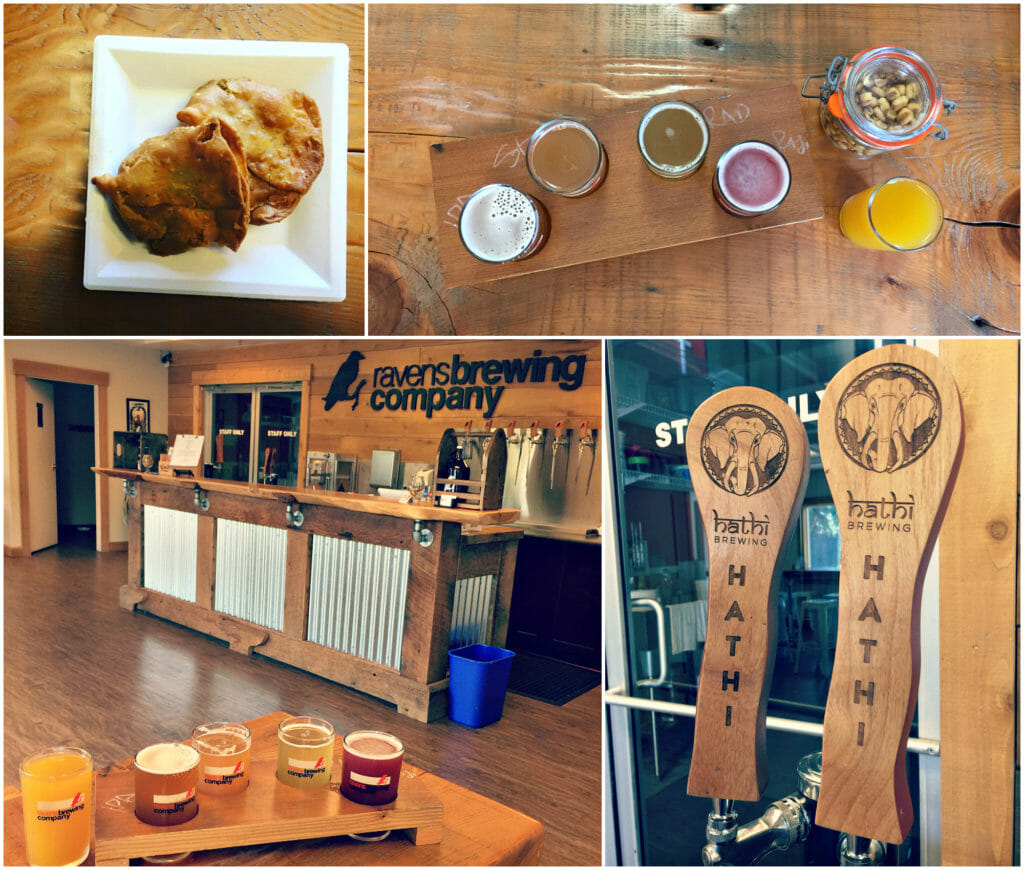 Valley in a glass

Hathi Brewing is the third brewery on our tour and conveniently they’re on tap at Ravens, where its beer is currently brewed under contract.

“Ravens Brewing, acting on one of their core tenants of building up the local community, has entered into an arrangement to contract brew while we await final approval on our permanent location,” Hathi’s Instagram profile states.

On this day we had a choice of Mango Bango Hefeweizen and an ISA Test Batch. Sadly, no Coriander Pale Ale that I’ve heard much about, but it’s an incentive to head out again some other time. Co-founder Aman Sidhu shared that they currently source their hops from Chilliwack Hop Farms and BC Hop Co.

Fresh off their Langley Beer and Food Festival “Best Beer” award, Hathi is now on tap and available in packaged product in many places around the Fraser Valley.  You’re also likely to see them out at one of the local beer festivals — you’ll have follow them on social media to find out where. 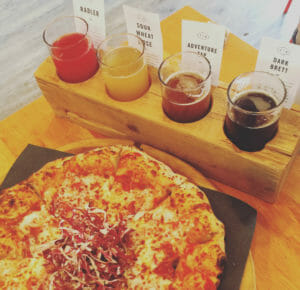 Our last stop was a few minutes away at Field House Brewing Co., which is quite the destination brewery.

Not only is the tasting room beautiful, fresh and modern, there’s the added bonus of the outside lawn area with grass, picnic tables and lounge space. Since my last visit, they’ve added the Taco Hut, which, along with their tasting room Canteen’s menu, features an assortment of foods made with locally sourced ingredients that embodies the brewery’s “Field to Fist” mantra. 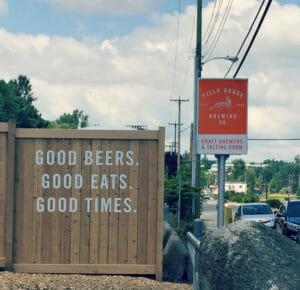 “We’re bringing in peaches and cherries from Lepp for pickles and chutney, as well as a skirt steak for our tacos. From The Local Harvest, we’ve been sourcing beets for pickles, cabbage for our tacos and charred cabbage caesar, basil for our pizza, carrots and onions for stocks and our tomato soup.

“We’re really excited about the huge harvest of tomatillos and jalapenos we’re about to get from JJ Mills for our salsa verde, and there’s been such an abundance of zucchini (as always) that we are featuring a zucchini pizza over the next weeks.”

Hungry yet? On our visit we opted for sharing the prosciutto pizza and a flight featuring Field House’s Radler, Sour Wheat Gose, Light Saison and Dark Brett. Again, a wonderful mix of lighter summer beers with aged complex beers.

Field House was a great spot to linger over lunch, sip our tasters and reflect on a day of spontaneous adventure. We never did make it out to those berry farms, or did we? But so many of the beautiful beers that we tasted featured fresh berry flavours. 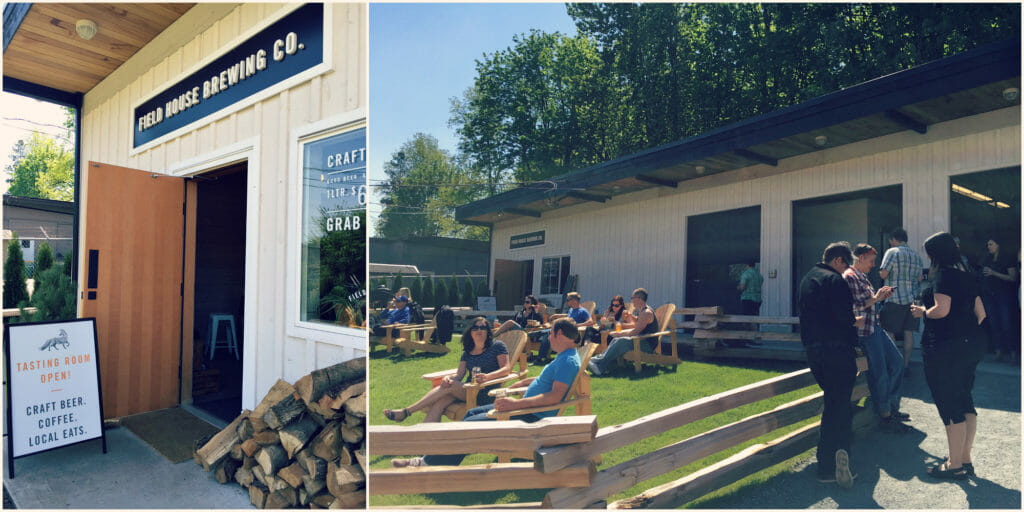 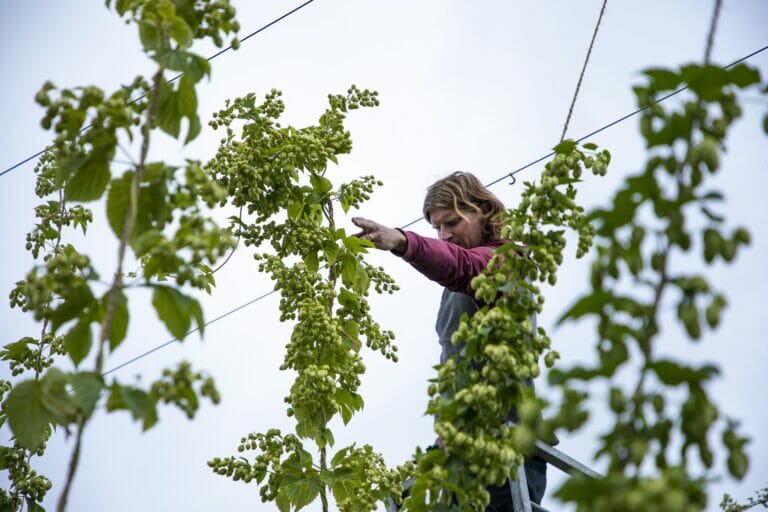 Beer from Start to Finish at Locality Brewing in Langley

If you want to know more about what’s in your pint glass, head out to Locality Brewing in Langley to enjoy quiet, fresh air, and even fresher beer. “Yeast” Van, move aside — Langley is one of the newest craft beer hot spots in BC. The agricultural community here is proving to be an eager … Continued 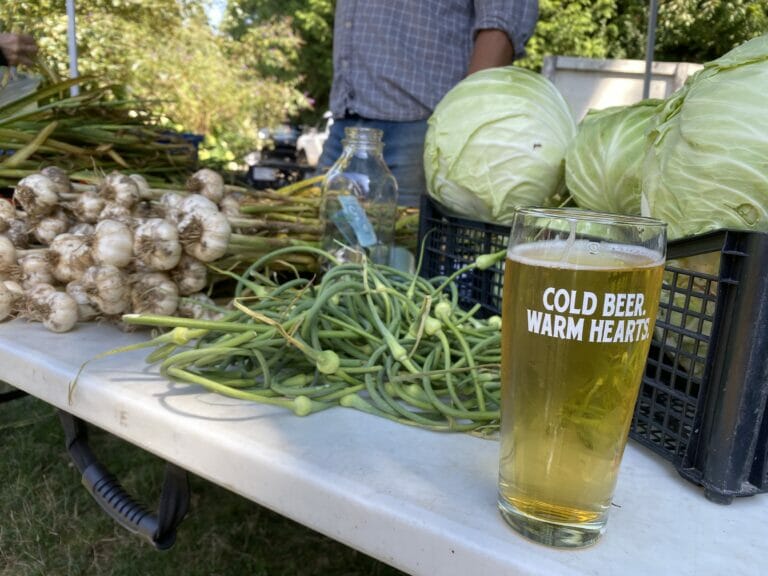 BC Craft Breweries and Farmers’ Markets: A Symbiotic Relationship

There’s something about the combination of craft breweries and farmers’ markets that is beautifully wholesome. For some, it’s a combination that brings the community together for fun and connection. For others, it’s like a lifeline and a symbiotic relationship of sorts. Craft beer fans typically have a handful of cherished beer memories. You know the … Continued