Missing out on overseas travel this year? You don’t have to travel far to enjoy these 100+ European-style beers produced by breweries right here in British Columbia.

Some of my greatest travel memories involve sampling beers in Europe — I remember my first sip of Hefeweizen in Germany back when I was a long-haired, wide-eyed, 20-year-old backpacker. It was delicious and unlike any other beer I’d ever tasted back here in Canada. It really opened my eyes (and palate) to the wide range of flavour possibilities that beer could offer, and my buddy Glen and I went on to taste beers all over Europe on that trip. Memorable standouts included black lager in Prague for 25¢/pint — we drank several in a row with some East Germans who regaled us with stories of what life had been like on the other side of the Berlin Wall; cask-conditioned ales in London; a long row of shilling ales at a pub in Edinburgh; and Guinness stout at the Brazen Head in Dublin, a 700-year-old pub that has been serving it since the brewery opened in 1759.

Later, when I returned as a slightly less hairy 30-something, my wife and I tasted freshly brewed pilsner in its birthplace, the city of Plzen in the Czech Republic — she still considers that style to be her favourite to this day. And on other trips since then I’ve guzzled litre steins of Märzen in the big tents at Oktoberfest in Munich; and sipped my way through a wide range of sours, saisons and barrel-aged ales on a tour of Belgium.

I can’t wait to go back again! My beer travel bucket list still includes: checking out the beer scene in Berlin; a return to Prague; more Belgian beer explorations; Italy (yes, they apparently have a great beer scene there); and a Scandinavian tour. Oh, and the Baltics: Estonia, Lithuania and Latvia, too! And I almost forgot Iceland, although maybe that’s not considered Europe…

You might have even had a trip to Europe booked this year, which you’ve been forced to cancel or postpone. Instead, why not explore the range of European-style beers that are brewed right here in British Columbia? Here is a sampling, organized by European country. It is not an exhaustive list of every such beer brewed here; your own local brewery might make one of these styles, too, so consider this as a starting point — like a suggestion in a guidebook that sends you to a neighbourhood in a foreign city you might never have explored on your own. (Note: I’ve included the United Kingdom even though it’s not officially part of the EU anymore.)

European-Style Beers on the BC Ale Trail

Germany is certainly one of Europe’s prime beer travel destinations. I’ve been there a couple of times, most recently to attend Oktoberfest in Munich to celebrate a buddy’s 40th birthday. We landed in Frankfurt and travelled down to the Black Forest and then across southern Germany to Bavaria, and everywhere we went, we tasted delicious beer. I noticed that the breweries in each town we visited all made three beers: a Helles (light lager), Dunkel (dark lager), and Hefeweizen (wheat ale with a surprising banana-like flavour). They were all very similar but beautifully made. And then the Märzen (Oktoberfest-style beers) we tasted in Munich were a little stronger and richer than the usual light lagers.

Germany has lots of other regional beer styles, too, and many of them are produced by breweries on the BC Ale Trail.

Kölsch is a regional style of German ale produced by brewers in Köln (Cologne). It is a very light, lager-like beer that is traditionally served in a tall, thin glass called a stange. The glasses only hold 200ml, but it is customary for waiters to keep delivering fresh glasses until you cover yours with your beermat. They also use the beermat to keep track of how many you’ve had, ticking marks on it with a pencil. Many BC breweries make Kölsch-style beers, including these fine examples:

Although the Pilsner style originated in Plzen, Czechia, German brewers make their own Pilsners, too, and they do it really well. Here are some good examples from the BC Ale Trail:

Although German brewers are well known for their precisely made lagers where any off flavour is strictly verboten, there is also a tradition of sour beer making there. Berliner Sourweisse are low-alcohol, tart and tasty beers that are traditionally mixed with a sweet syrup, while brewers in Leipzig are known for their salty and sour Gose. Both of these styles have been embraced by brewers in BC.

A wide range of amber lagers can be found in Germany, often produced as seasonal beers at certain times of the year. Märzen was originally brewed in March (hence the name) and then cellared until the end of summer to be served at a big harvest celebration, which evolved into Oktoberfest. And I’ve included some Vienna Lagers here, too, even though I know Vienna is in Austria.

Bocks are stronger, often darker lagers. The name evolved from the Bavarian pronunciation of Einbeck, the city where they originated, which sounded like “Ein Bock.” Since Bock is also the German word for billy goat, brewers there usually put the image of a goat on the label. Also, the names of Doppelbocks usually end in “-ator” because the original, which was brewed by Paulaner monks, was named “Salvator.”

Czechs are famous for consuming more beer per capita than any other country in the world. And I’m not surprised because Czech beer is both delicious and cheap! I’ve been there a couple of times, once back in the early ‘90s when it still felt like it was part of the Soviet Bloc, and again in 2003. It’s high on my list for a return trip — for the beer as well as the food, culture and architecture.

Given it is the birthplace of Pilsner, you shouldn’t be surprised that is the main style produced. Light golden lager (světlý ležák) with slightly different regional variations dominates the beer scene for sure, but Czech brewers also make very good black lager (tmavý ležák).

Every beer explorer eventually falls in love with the amazing world of Belgian beer. It is truly unique with its mix of ales, saisons, lambics and Trappist beers. I definitely hope that I can return to Belgium one day; I felt like I barely scratched the surface during the week I spent there in 2014.

Many Belgian beers have a unique flavour that comes from the yeast used in the brewing process, which adds a peppery, fruity zing to the beer. And Belgian beers are typically stronger — while an average beer here in Canada is brewed to 5% ABV, the standard there seems to be 7% ABV. It’s not uncommon to see beers with alcohol levels at 9% or 10% ABV either.

Here in British Columbia, many breweries make Belgian-style beers, and none more impressively than Dageraad Brewing, a Burnaby-based brewery that specializes in Belgian styles exclusively. Dageraad was named Canadian Brewery of the Year in 2018 and won the most medals at the 2019 BC Beer Awards. I could easily list all of their beers here, but rather I’ve noted a few examples in the list below. If you’re a Belgian beer fan, you should definitely visit this brewery! (We hope to add Burnaby to the BC Ale Trail soon.)

Witbier is the Belgian equivalent to German Hefeweizen — the Belgian yeast gives it a citrusy flavour that is often enhanced with the addition of orange peel and coriander.

Traditionally, Saisons were brewed at the end of winter by Belgian farmers in communal breweries in their local villages, and then stored away until the harvest when seasonal workers — saisonniers — were hired to work on the farm. Saisons have evolved into a spicy, fruity Belgian ale with a dry finish, and many BC breweries make good examples of the style, none better than Townsite Brewing in Powell River, which makes sense since the brewer there, Cédric Dauchot, was born and raised in Belgium.

Sour beers are a big part of Belgian beer culture. Lambics are traditionally brewed in flat, rectangular vessels called coolships that are left open to the air so that wild yeasts and bacteria in the brewery will begin the fermentation process spontaneously. These beers are then aged for a long time in barrels, often with fruit added, and then finally blended with different vintages before being bottled. Like champagne, the name “lambic” is a protected name that can only be used by certain breweries in the Senne River Valley, but many BC breweries make lambic-style sour beers. James Walton at Storm Brewing in Vancouver is widely regarded as the pioneer in that realm here — he has been making lambic-style sours at his brewery for more than 25 years. Look for a new release of Storm’s King Rattus Blackberry Lambic this fall as well as some cherry and raspberry barrels that he says Storm will likely keg up for samples and growler fills in September.

Another leader in this style of beer in BC is Iain Hill at Strange Fellows Brewing. He is very excited about acquiring a coolship that the brewery will use for the first time this fall. And another good source for lambic-style beer is Townsite Brewing in Powell River.

And then there is the tradition of brewing in Trappist monasteries, which originated in Belgium and neighbouring Holland. Today, there are 14 such breweries in the world, including six in Belgium. Some Trappist beers are distributed internationally, while others are only available in Belgium, but some BC Ale Trail breweries recreate their recipes. Again, the name “Trappist” is reserved for the monasteries themselves to use; here, they are either called Abbey Ales or Trappist-style beers. Within that category, you will find Dubbels (brown ales around 7% ABV), Tripels (light-coloured strong ales around 9% ABV), and Quadrupels (dark ales topping 10% ABV), as well as a delicious style of pale ale conditioned with Brettanomyces, produced at the Orval monastery.

No European beer-cation would be complete without visiting the United Kingdom. Brewing in England, Ireland, Scotland and Wales goes back just as long as in Germany, but it is focused on ales, not lagers. Cask-conditioned beer is a big deal in the UK, and you can find proper cask beer here in BC, too.

Be sure to tag us @bcaletrail on social media as you share your exploration of European-style beers around BC! 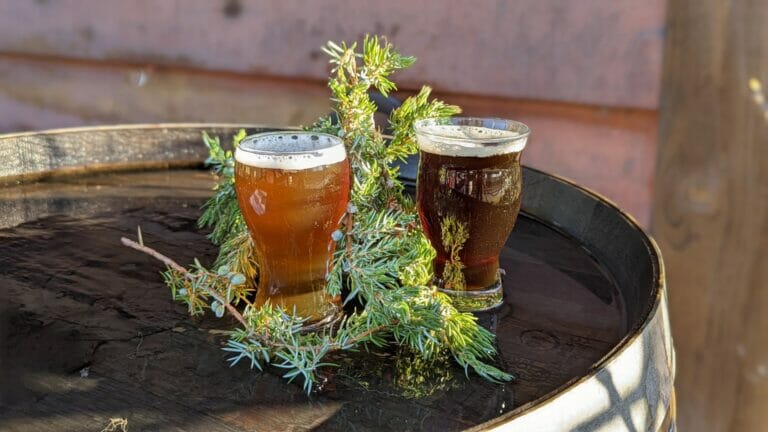 To help celebrate the holiday season, many craft breweries in British Columbia have been busy brewing up something special. Some of these holiday-themed beers are made with spices, cranberries, chocolate — or even candy canes! These wintry beers are often a little darker and stronger, making them well suited for colder, darker days. Here are … Continued 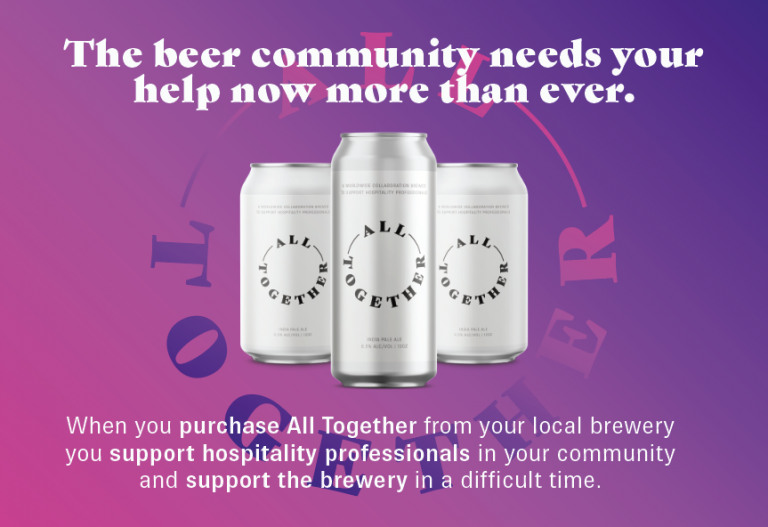 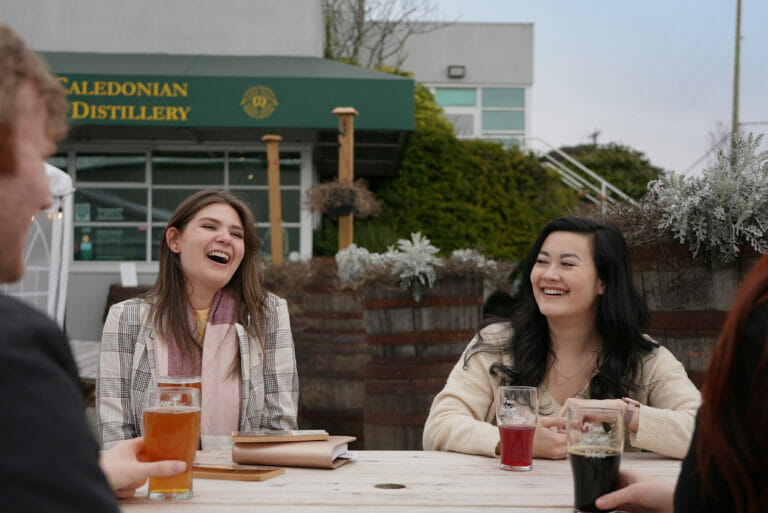 BC Breweries 101: How to Be a Considerate Craft Beer Consumer (2021 Spring Edition)

Time for a COVID refresher. Follow the BC Ale Trail’s guide to the new world of physically-distanced craft beer and the latest public health restrictions. As of March 30th, drink and dine-in service is prohibited, except for outdoor patios. ⁠People dining on patios should do so only with their immediate household or core bubble (groups … Continued