Oysters in the desert is a fine diversion to self-guided explorations in the BC Ale Trails of the Okanagan region. Why not follow some of the region’s great craft breweries to the annual Osoyoos Oyster Festival?

The Okanagan bounty offers so much with its abundance of awe-inspiring vistas, lakes, mountain trails, shoreline pathways, orchards and vineyards. While it lacks ocean frontage, local culinary impresarios were keen to bring in sustainable seafood delicacies to slurp back in such a stimulating setting. A picturesque lakeside community, Osoyoos is at the southern tip of the Okanagan just two kilometres from the Canada/United States border and nestled between the Penticton and Kootenay Rockies West Ale Trails. It shares Osoyoos Lake with Washington State. Located at the junction of Highways 97 and 3, Osoyoos is the southern gateway to the Okanagan and Similkameen Valley.

The seventh annual Osoyoos Oyster Festival took place April 18 – 23. The event showcases Osoyoos and the South Okanagan as a premier destination for all things oysters! Since the Osoyoos Oyster Festival’s inception, Codfathers Seafood Market of Kelowna has worked closely with Destination Osoyoos to ensure the finest and freshest of oysters are shipped in for guests to enjoy. The local wine industry was engaged from the outset because you can’t think Okanagan without thinking wineries. Each year as the events evolve, however, craft beer, cider and spirits have been welcomed to the fold and events like Beach BBQ & Brews have become very popular.

Beach BBQ & Brews was hosted by Walnut Beach Resort as the kick off to the weekend. Of course, the focus is on oysters, raw and cooked, representing the East and West Coast. Held overlooking the pool, the beach, and Osoyoos Lake, this event has a casual vibe reminiscent of summer family gatherings. Four of the region’s craft breweries were on hand, along with three local cideries and a craft distillery. 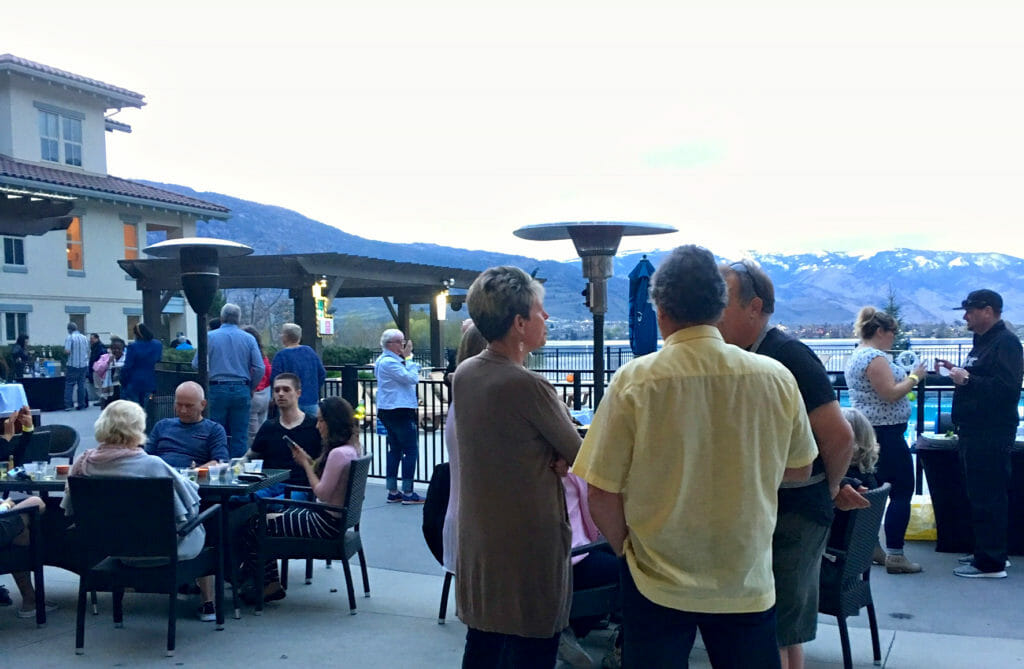 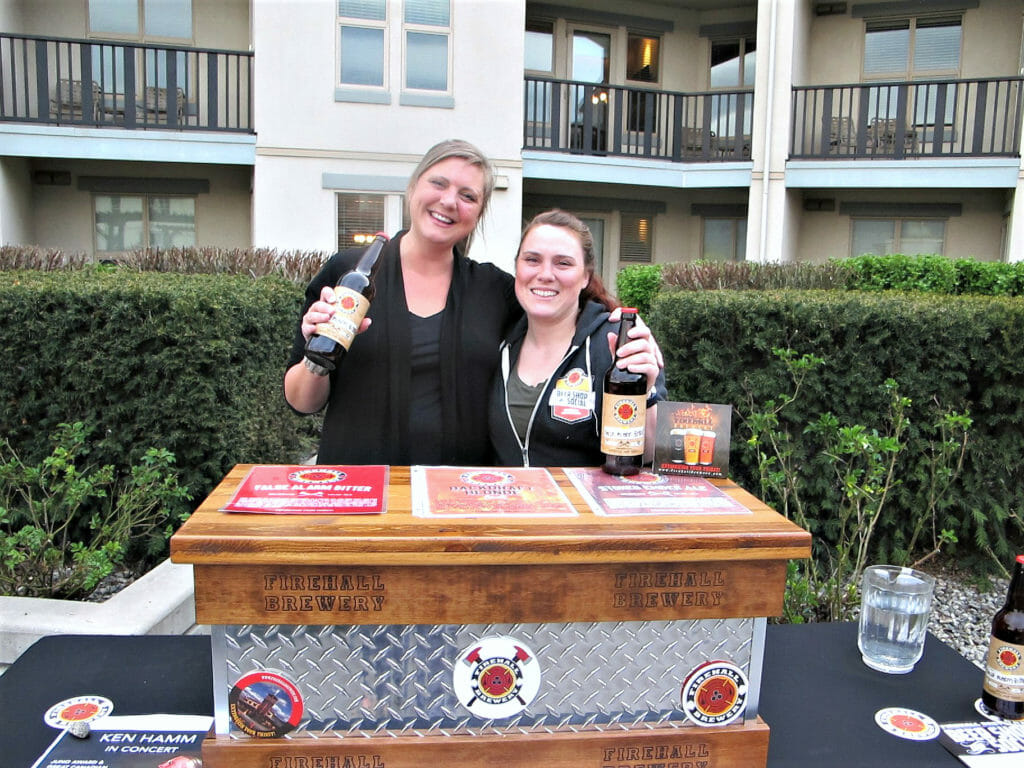 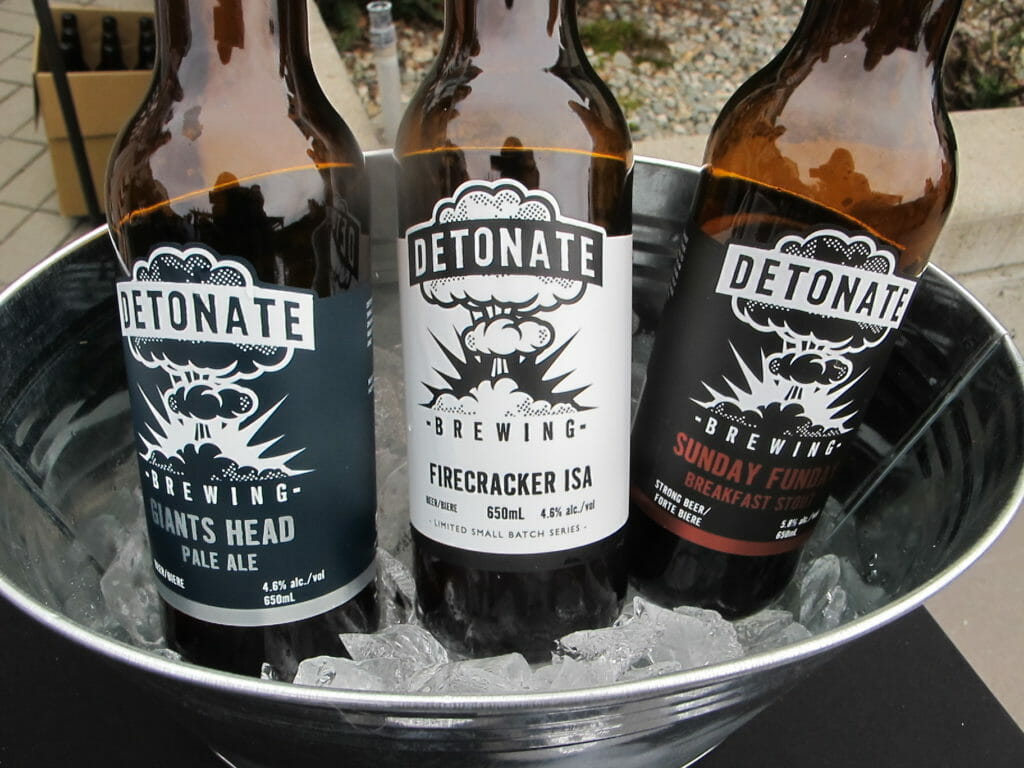 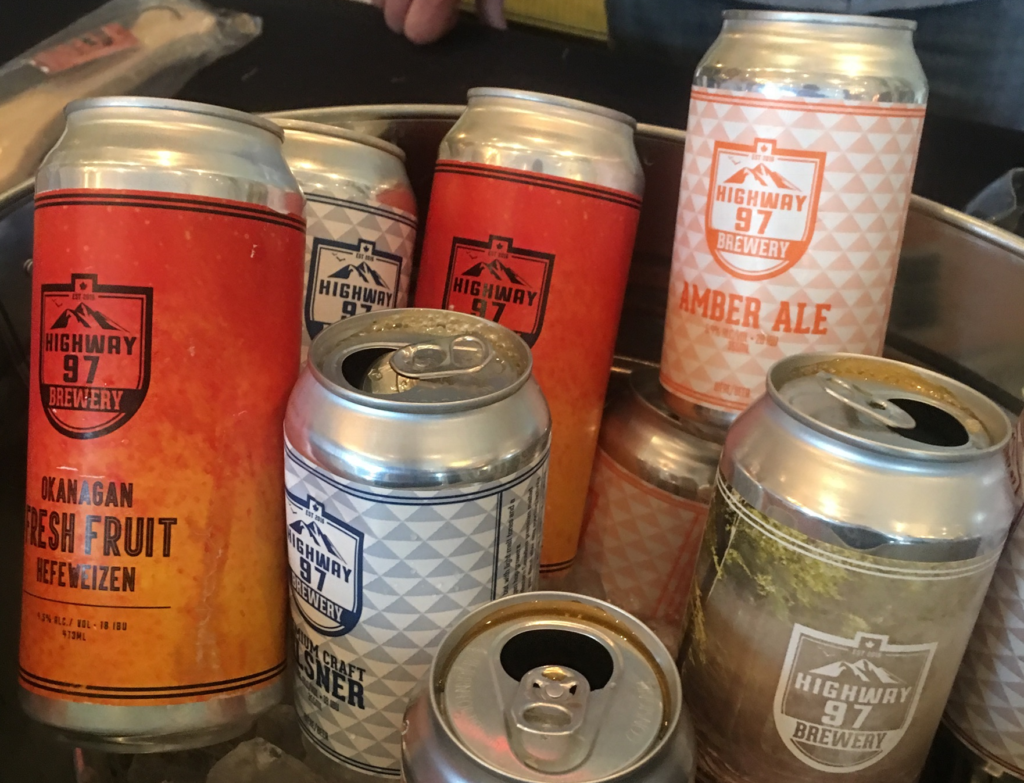 At Codfathers’ display, world champion oyster shucker, Patrick McMurray aka “Shucker Paddy” showed the proper way to shuck an oyster. Guests marvelled at the speed at which McMurray could work his magic as he demonstrated his own designed SwissMar Shucker Paddy pistol-handled universal oyster knife. McMurray holds the Guinness World Record for the most oysters shuck in one minute (39) and most in one hour (1,114) and is author of “Consider the Oyster – A Shucker’s Field Guide”.

McMurray prepared Glacier Bay Oysters, harvested under the ice in New Brunswick. These oysters are plump with a firm texture and had a clean, crisp saltiness mellowing to a mild melon flavour at the end. For me, these paired perfectly with Cannery Brewing’s Muse Extra Pale Ale, Howling Moon Craft Cider’s Makers Series Cucumber Mint and Rustic Roots Apple Rhubarb Crisp Cider. 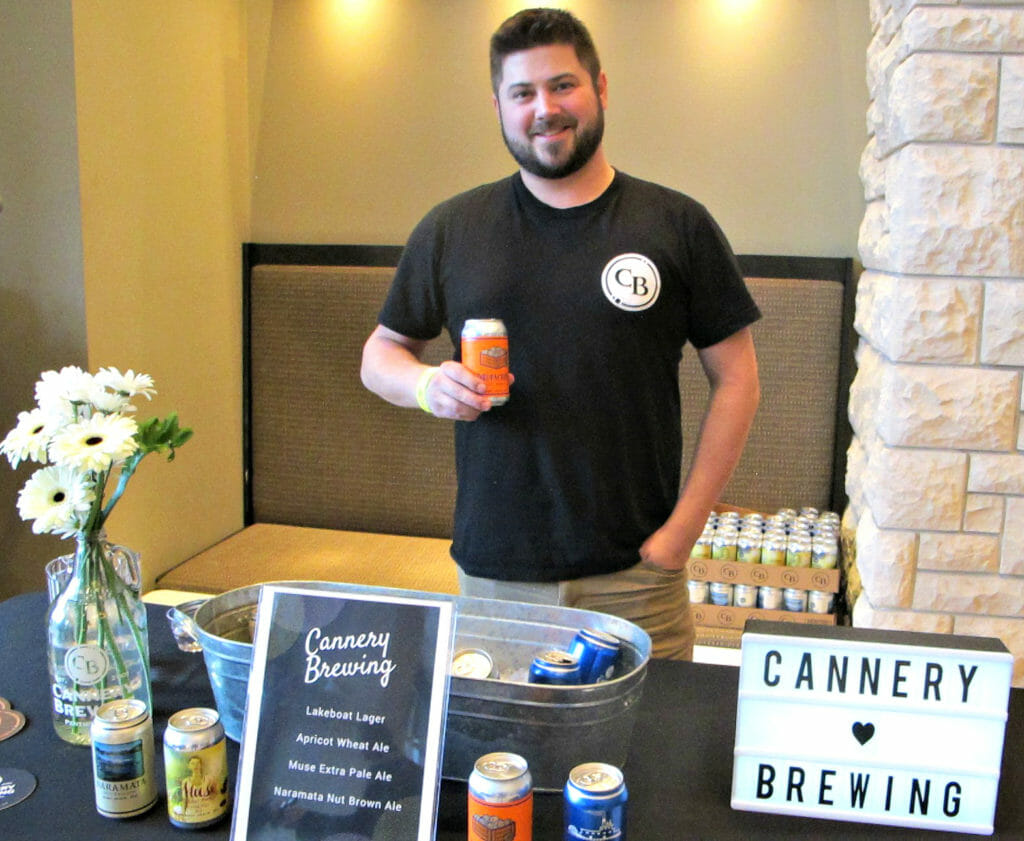 Codfathers prepared barbecued salmon sliders as another delectable seafood alternative to oysters. With it, I found that Highway 97 Brewery Premium Pilsner, Cannery Brewing Lakeboat Lager, Firehall Brewery Backdraft Blonde and Howling Moon Revolution Dry Craft Cider worked well. Truly a family initiative, Codfathers’ owners Jon and Anne-Marie Crofts were joined by three sons, Jack, Tom and Jamie to assist them and Shucker Paddy, plus any of the chefs who needed an extra hand in expert shucking. 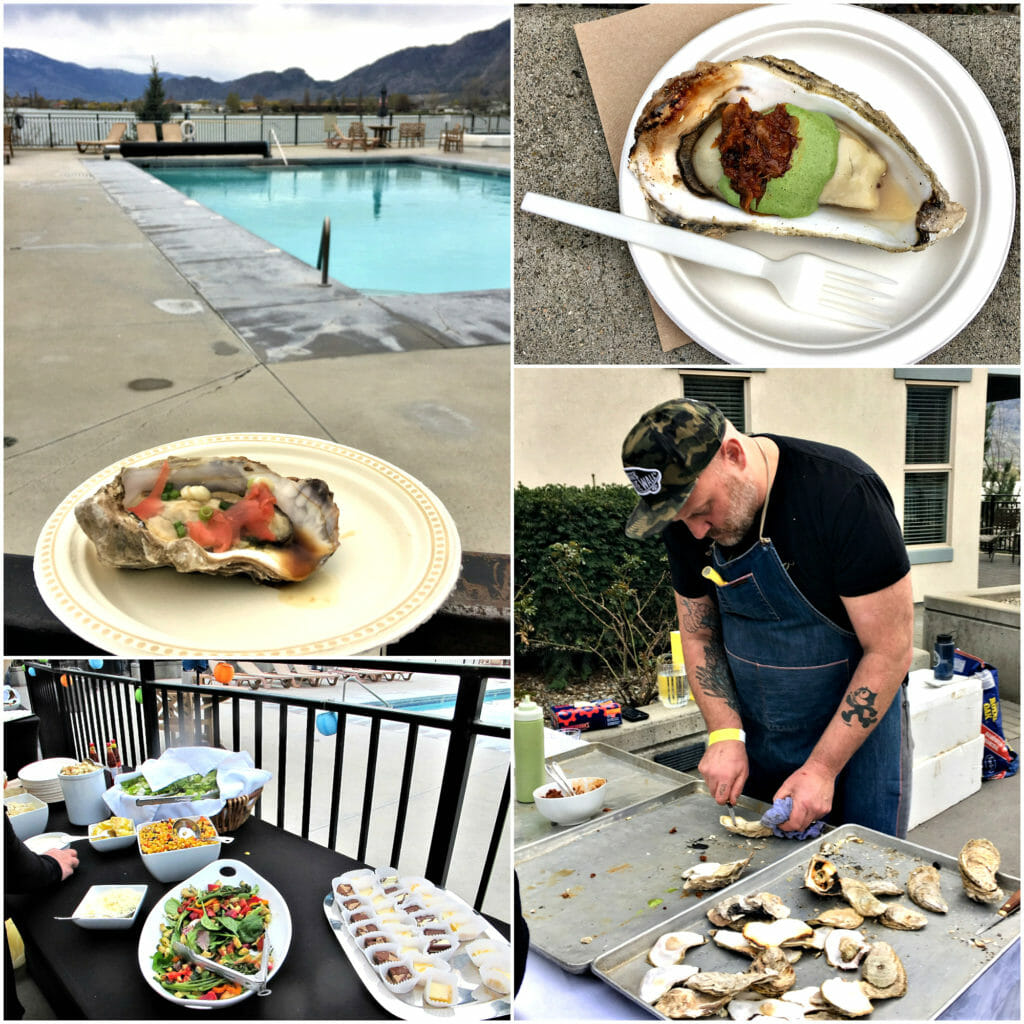 The Maverick Cider Hard Apple Cider and Rustic Roots Snow Cider Extra Dry Apple were almost as classic as champagne in pairing with the fresh oysters. Signature cocktails and spirit samples were also available. With music accenting the evening, what a crafty way to set the tone for the festival!

Next afternoon, the Deep Sea Garden Party was held at Watermark Beach Resort and Conference Centre. Staged on the patio and courtyard with an incredible view of Osoyoos Lake, it featured a small Garden Market along the oysters and culinary delights. Beverage samples included Firehall Brewery, Twisted Hills Ciders and a variety of Osoyoos, Oliver and Similkameen wineries.

Fortunate to stay in a well-appointed two-bedroom suite at Watermark Beach Resort, I napped before heading on the included shuttle to Spirit Ridge Resort for the Art of the Pearl Gala. Once again with a fine selection of wineries from Oliver, Osoyoos and the Similkameen, craft beer drinkers had Firehall Brewery, cider drinkers BC Tree Fruits, and craft distillery Dubh Glas of Gallagher’s Lake.

Craft beer becomes more central to the Osoyoos Oyster Festival each year as the events evolve. Really, doesn’t craft beer go with everything? Watch Osooyos Oyster Festival for details on the 2019 edition, likely to be held around the third weekend in April. See you there! 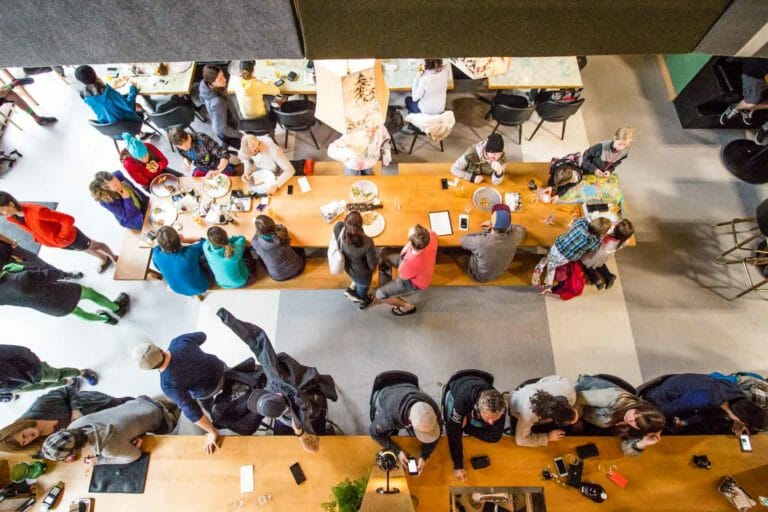 Squamish Breweries Have All You Need For Apres Adventure

Squamish has come of age in the craft beer world and is now set to become a BC Ale Trail destination. For many people, Squamish has long been a refuelling stop on the spectacular Sea to Sky Highway from Vancouver to Whistler. But in recent years, this town of around 20,000 people has repositioned itself as an … Continued