Celebrating craft beer in the oceanside community of Sooke.

Sooke Oceanside Brewery was founded by a chef who loved to make beer in his garage in his downtime. He dreamed of opening a brewery on the waterfront in Sooke. Although S.O.B. started off in a tiny location next to a gas station, he held on to his dream, and finally, just before its fifth anniversary, the brewery moved to a fantastic new location in a custom-built facility with an ocean view. The tasting room is tucked behind a building housing Fuca Cycles and the Seek & Surf shop.

The delicious range of beers has built a strong following in the local community so you’ll be sure to find local regulars alongside enthusiastic beer seekers there. Look for food trucks parked outside on a regular basis.

Cyclists, take note that Sooke is accessible from Victoria via the Galloping Goose Trail. 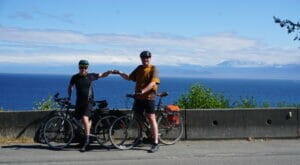 Seven BC Campground and Craft Brewery Pairings for your Summer Scheming

Fancy a flight? Here are some sampler suggestions for Sooke Oceanside Brewery